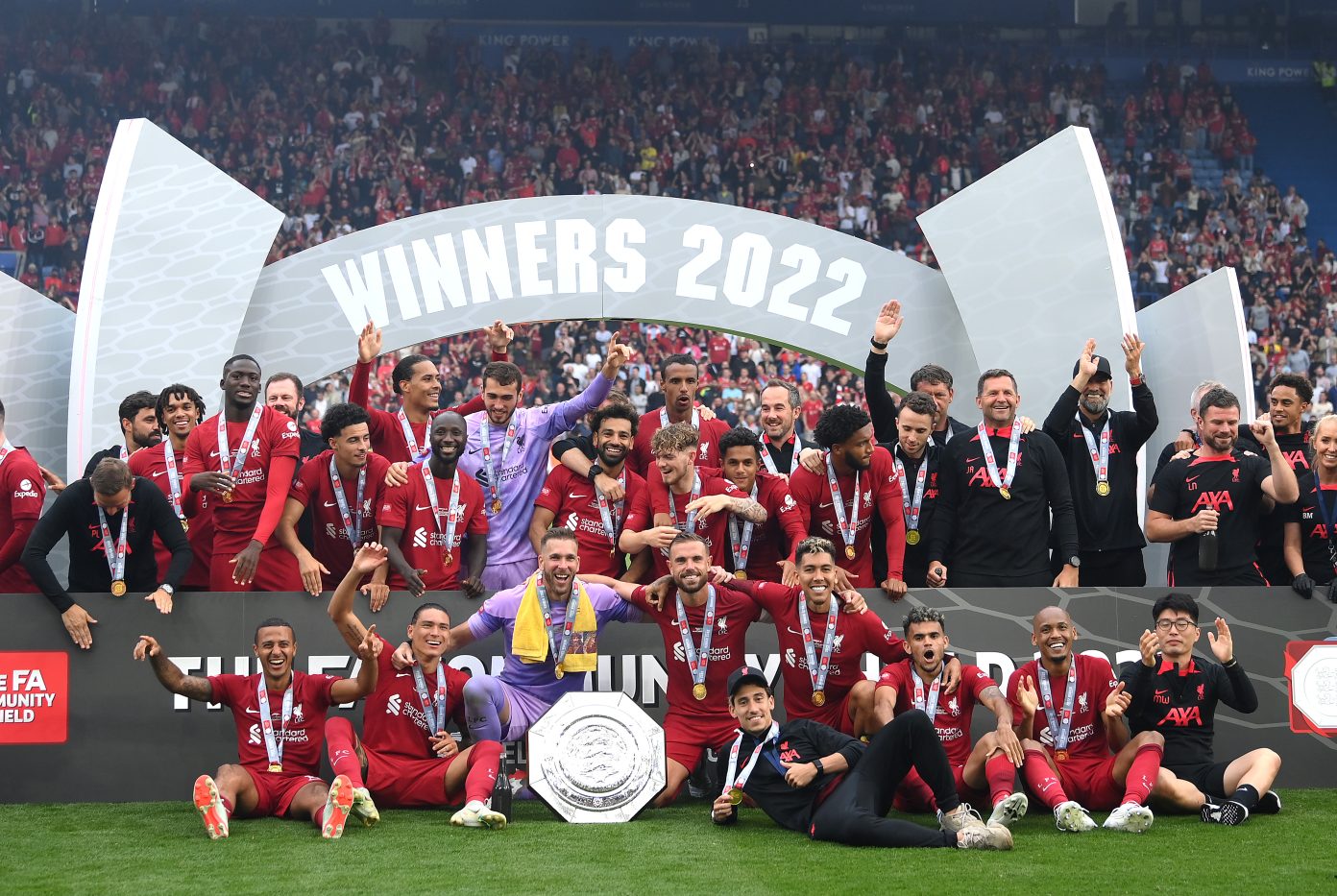 Liverpool beat their biggest rivals, Manchester City, in the FA Community Shield match today 3-1. Trent Alexander-Arnold, Mohamed Salah, and Darwin Núñez all scored for the Reds. Liverpool managed to put together a mostly dominant performance over the team they lost out on the Premier League title to in May.

City had only played 2 preseason matches, while Liverpool had played 4 matches coming into today. The difference in match fitness was evident from the start. Liverpool came to play tonight, showing near mid-season form in nearly every facet of the game.

This is Liverpool’s 16th Community Shield trophy. This season’s edition was played at the King Power Stadium in Leicester. Usually, the FA Community Shield match is played at Wembley Stadium. However, it is occupied this weekend by the Women’s European Championship.

Trent Alexander-Arnold scored in the 21st minute for the Reds which capped off the early push by Jürgen Klopp’s side. The goal was set up by Mo Salah, who in my opinion was the Man of the Match. While Alexander-Arnold’s finish was slick, it was helped by a slight defection off of Nathan Ake’s forehead.

Liverpool held a massive advantage in the first 30 minutes of the first half. From that point, Manchester City really grew into the game. In the 33rd minute, Adrián was forced into action as Manchester City’s new signing, Erling Haaland got a difficult shot in on goal. It was certainly City’s best chance of the half.

Manchester City continued to push the tempo towards the end of the half but, Liverpool’s defense was strong.  As it went to the half, City actually ended up with slightly more possession at 55-45%. Each team had 5 scoring chances in the first half.

The real fireworks happened after the interval. While neither team made any substitutions at the break, both teams had a lot of energy coming out of the dressing room. The play was open and free-flowing with each team exchanging chances. The first substitutes were made in the 58th minute and they would have a massive impact on the game.

Liverpool brought on Darwin Núñez for Roberto Firmino. Manchester City subbed on Phil Foden and their other big signing, Julián Álvarez. Álvarez in particular was a force immediately after coming in off the bench.

Álvarez would draw City level in the 70th minute, putting a rebound in past Adrian. The play was initially ruled offside but after a lengthy VAR review, the goal was given. Briefly, it looked like City had swung the momentum their way but VAR prove useful to the Reds in the 83rd minute.

In the 83rd, Mo Salah sent yet another wonderful cross into the box, Darwin Núñez got his head to it, striking it toward the goal. The ball went right off of defender João Cancelo’s hand but, it was initially missed by the referee. After another lengthy VAR review, the penalty was given.

Mo Salah stepped to the spot and stung the ball into the net low to Ederson’s right. The Liverpool supporters erupted and the team celebrated as if the team had just won a regular season match against City. The whole game felt like it meant more to the Reds than it did to City.

As the game closed in on its end, Liverpool definitely played like they wanted the match more. Darwin Núñez put the game away in stoppage time. His header in the 90+4 minute, set up by Andy Robertson, and once again, the Egyptian King, Mo Salah put the FA Community Shield in Liverpool’s grasp.

It was Núñez’s first goal on English soil. He was a focal point of the entire match even before he subbed on in the 58th minute. Liverpool fans were chanting his name in the first half when he was warming up. They were still chanting his name after the final whistle.

Man Of The Match and What’s Next

Núñez was a menace to the City defense the entire time he was on the pitch. He made a strong case to be considered to be the man of the match. However, Mohamed Salah was just too good for the entire match not to get the honor. Mohamed Salah is flying coming into the new season. He was today’s Man of The Match. He will surely be the MOTM many more times this year.

Liverpool wraps up their pre-season schedule tomorrow night at Anfield against Strasbourg FC. But let’s be real… Everyone is looking forward to next Saturday, August 6, when the Reds kick off the 2022/23 Premier League season in London against Fulham.