Jurgen Klopp pleased with Reds side despite Community Shield defeat

Jurgen Klopp insisted he was pleased with his Liverpool side despite their penalty shoot-out defeat to Arsenal in the Community Shield.

It was a second consecutive penalty shoot-out loss in the Community Shield after last year's defeat to Manchester City, which also ended 5-4 on penalties.

Liverpool went 1-0 down in the first-half after a fine strike from Arsenal captain Pierre-Emerick Aubameyang. However, they found themselves level thanks to Takumi Minamino's first goal for the club.

Neither side failed to find a winner despite their best efforts, with the clash going straight to penalties with no extra-time. Substitute Rhian Brewster missed the only penalty in the shoot-out, which proved pivotal as Aubameyang scored the winning penalty for the Gunners.

The 20-year-old was brought on in the 92nd minute for Gini Wijnaldum, and it'll be a bitter moment for the youngster, but one he should hopefully get past.

Speaking after the game, Klopp downplayed the defeat: "In parts, I was pleased.

"I know what we have done and what I expected from a physical and tactical point-of-view.

"We played against a defensive block, and we had to have fresh legs and make the right decisions. All normal. [We have another] 2 weeks to prepare."

Brewster's introduction late in the game was thought to be for the youngster to take a penalty in the shoot-out, but Klopp paid no attention to his miss as he shrugged it off.

"We all have to learn and prove we can deal with defeats. If he would have scored and someone else missed, it's the same theme," Klopp said.

"There are bigger reasons than that. Missing it like this is possible. [I have] never seen him miss one, but today it happens."

The introduction of January signing Takumi Minamino was a welcome one for Liverpool fans who are excited to see what the Japanese international can do with a full pre-season behind him.

It was an encouraging cameo from Minamino, whose link-up play and dribbling ability were much-needed in a performance void of creativity from Liverpool's side.

He also netted his first goal for the club as he slotted in past Martinez from close range. 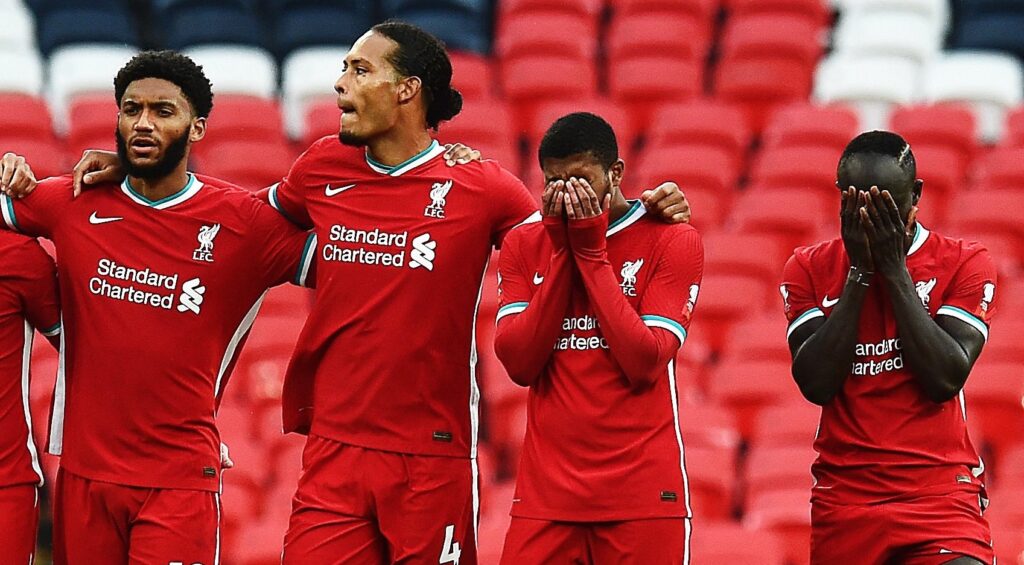 Klopp insisted that the only thing missing from Minamino's performances for Liverpool was a goal and he's now onto the next step in his progression at the club.

"It was a big day for him and us. The only thing he lacked for us was a goal. He's had some moments, and the shape he is in is obviously good," Klopp said.

"The goal was the logical step for him. I am very pleased for him. Very important for us and him to make this step.

"Taki can have an impact, that is why we signed him, I don't want massive pressure on him; there is no need for it.

"He is a really useful player. He is good in small spaces, first touch exceptional and decision making between the lines is good. He has had to adapt."

Adapting to Klopp's Liverpool has always been a difficult process. The likes of Andy Robertson, Alex Oxlade-Chamberlain and Fabinho were all groomed into the first-team gradually with Klopp preferring them to adjust to his philosophy before throwing them into the mix.

Klopp has taken the same approach with Minamino since his arrival in January, and with a goal under his belt, the hope is that he can kick on from here.

Liverpool players now go on international duty before kicking off the 2020/21 Premier League season at home against newly-promoted Leeds United on 12 September.