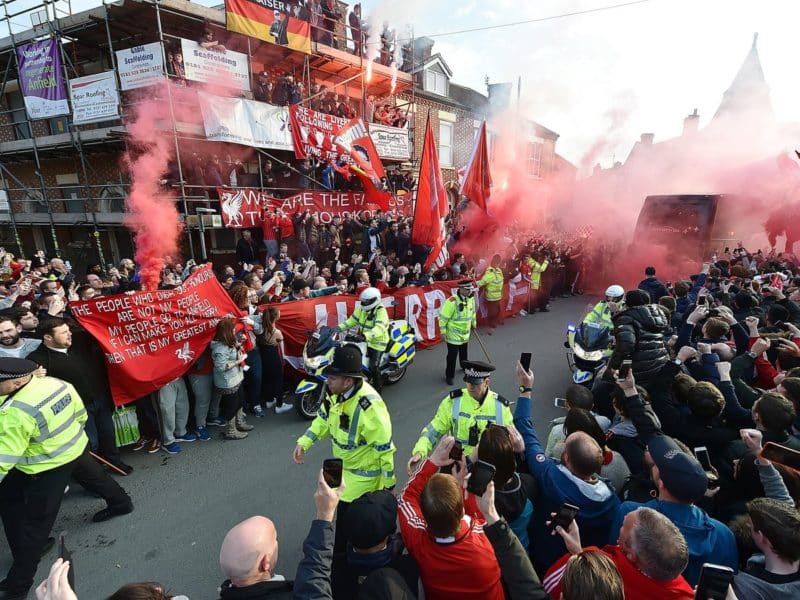 Police will be on high alert after warning fans over their behaviour as Liverpool and Manchester City have team coaches diverted on different route ahead of fiery Champions League showdown.

In recent years, thousands of Liverpool fans have lined the streets to greet the team coaches for the big occasions with red flares set off to create a hostile atmosphere.

Merseyside police have confirmed that both team buses would not be taking their usual route 'due to building works and to ensure the safety of fans'.

The police statement read: 'Fans attending the Liverpool v Manchester City match on Wednesday April 4 are advised the team coaches are not taking their usual route past the King Harry pub.

'Due to building works and to ensure the safety of fans, they will instead travel along Arkles Lane, passing The Arkles pub before turning right onto Anfield Road.'

Liverpool responded to the statement on the club's official website, saying: 'Ensuring the health and safety of our fans and visitors is at the forefront of our all our procedures. The decision was therefore taken to redirect the team coaches via a new route following guidance from Merseyside Police.

'The club is working with the police and other key stakeholders to provide a safe environment for those supporters who wish to welcome the team ahead of the match against Manchester City.

'We have taken additional steps to make sure the area is as safe and secure as possible, whilst working with local residents to ensure that they remain unaffected by any potential fan activity.

'We ask that any supporters who do wish to gather to show their passion and support for the team, do so in a friendly, respectful and considerate manner.'

Liverpool fans had planned a coach welcome for their players before the game on Wednesday night.

City expressed 'serious concerns' to police after it emerged that fans were planning to fill the streets ahead of their game.

During the title run in 2013-14, thousands of Liverpool supporters filled the streets around Anfield to deliver an intimidating atmosphere ahead of huge games against rivals like Chelsea.