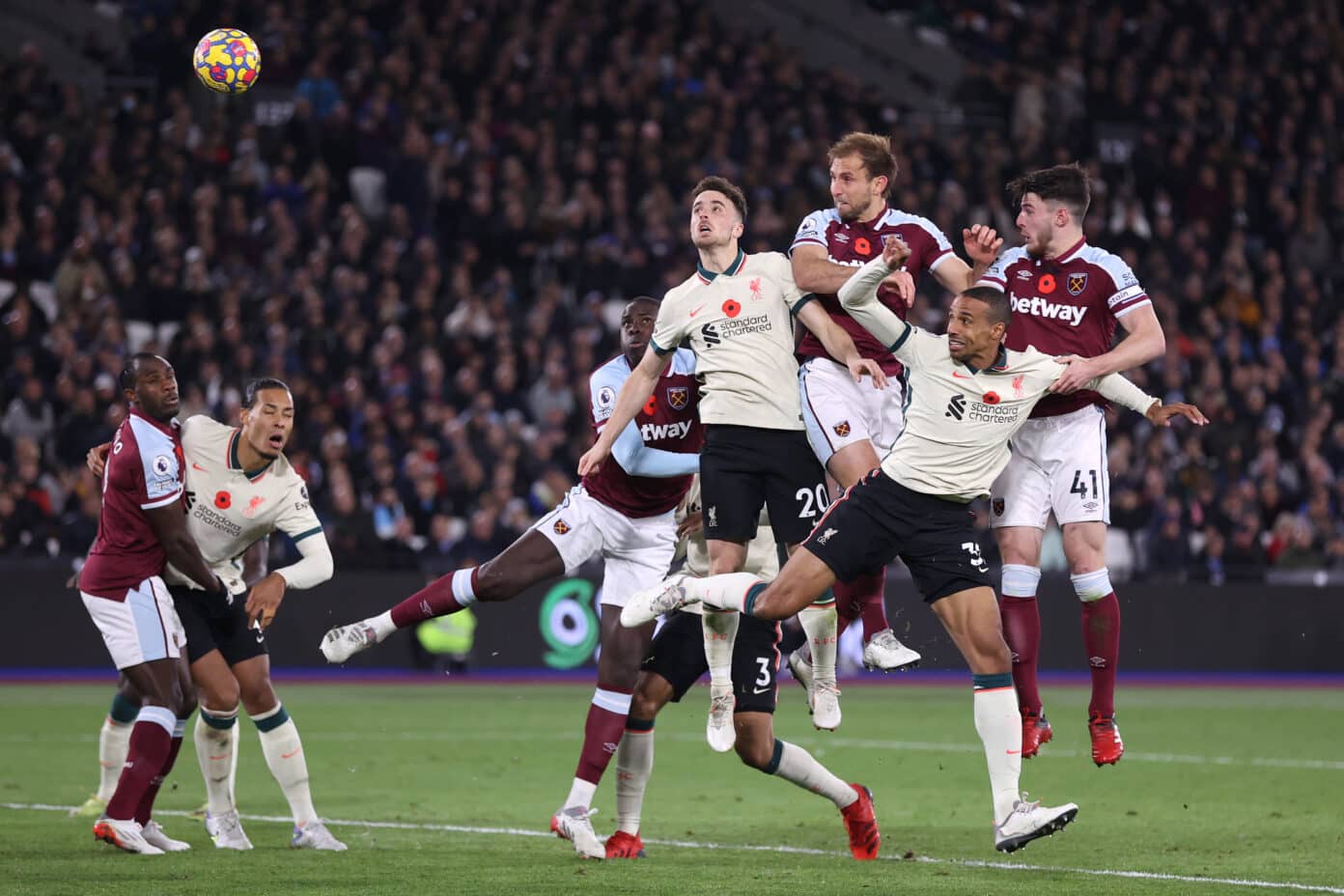 Liverpool's club record-equalling 25-game unbeaten run came to an end as they were defeated 3-2 by West Ham United in the Premier League on Sunday.

It was a compelling first half that started horribly for the Reds as they went 1-0 down from an Alisson own-goal after Pablo Fornals' corner, but an exceptional free-kick by Trent Alexander-Arnold drew Liverpool level before the break.

Liverpool struggled to get out of the blocks in the second half and they found themselves 3-1 down following a strike from Fornals and Kurt Zouma header, before substitute Divock Origi gave the Reds a lifeline seven minutes from time.

Despite a glorious opportunity for Sadio Mane in added time, it ultimately finished 3-2 to the hosts on a disappointing day for the Reds, who now find themselves a point the Hammers in fourth place as they head into the November international break. 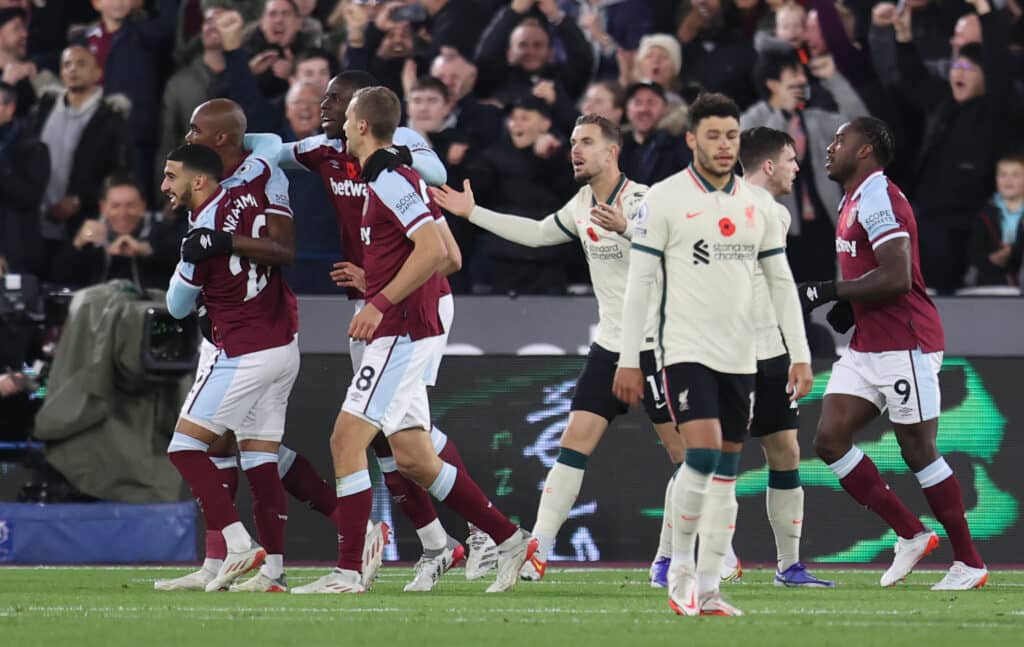 Alex Oxlade-Chamberlain continued in midfield alongside Fabinho and skipper Jordan Henderson, whilst Kostas Tsimikas made way for Andy Robertson in the Reds back-line.

West Ham got off to the ideal start as a Pablo Fornals corner was flapped into the back of his own net by Alisson, who appeared to be impeached by Angelo Ogbonna, but VAR upheld the goal as the Reds went 1-0 behind inside the opening five minutes.

There was a red card check against Aaron Cresswell after the left-back followed through during a forceful tackle on Henderson, but nothing was given as the referee's original decision of no action stood.

The Reds failed to build any momentum towards the Hammers goal as they went in search for an equaliser, with the hosts well drilled defensively and offering more than a threat going the other way.

It took Liverpool just after the half-hour mark to register their first shot of the game, with an unmarked Diogo Jota heading over the crossbar after Henderson had picked him out with a cross from the right. 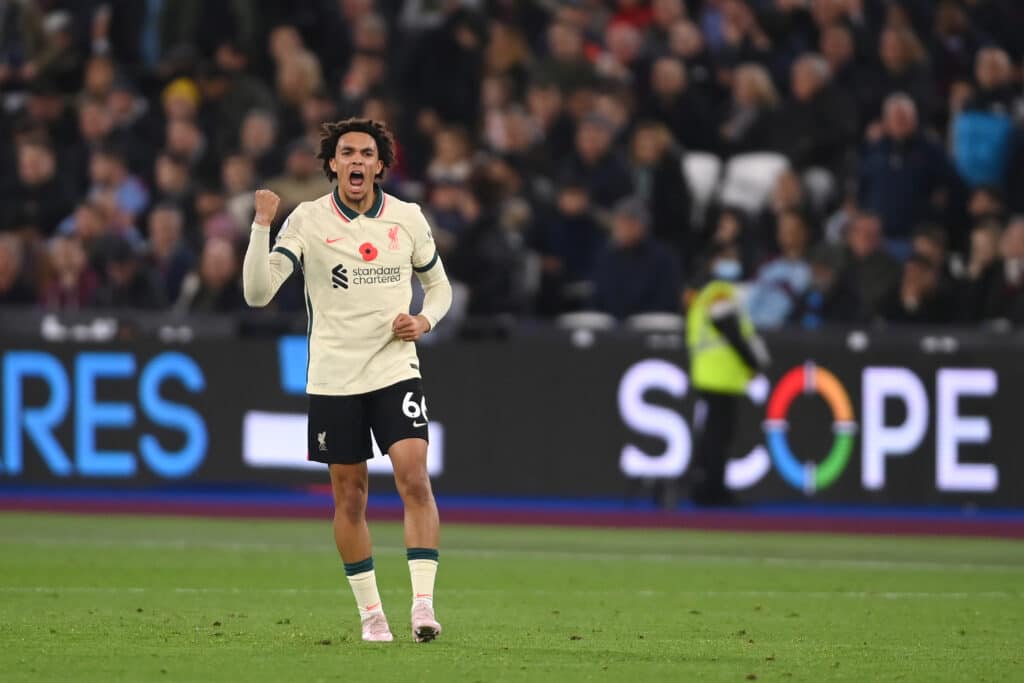 Liverpool began to find pockets of space down the sides but the final ball was often lacking, with Robertson and Trent Alexander-Arnold both unable to find any joy despite picking up space in some threatening positions.

But the Reds found their way back into the game in the latter stages of the first half through an excellent Alexander-Arnold free-kick, with the Reds' right-back shifting the ball to Salah before striking the ball past Lukasz Fabianski to make it 1-1.

Liverpool were caught on the counter as they looked to strike for a second time, with Michail Antonio latching on to Said Benrahma's through ball and looking to go clear at goal, but a poor touch from the Hammers forward allowed Alexander-Arnold to sweep up.

The hosts had another opportunity just before the whistle as Pablo Fornals evaded Alexander-Arnold and nearly found the incoming run of Jarrod Bowen, but a goal-saving challenge by Virgil van Dijk kept the hosts at bay.

West Ham's threat from corners was evident again at the start of the second half as a dangerous ball from Fornals was met by substitute Craig Dawson and headed on to the crossbar as the Reds survived a big scare. 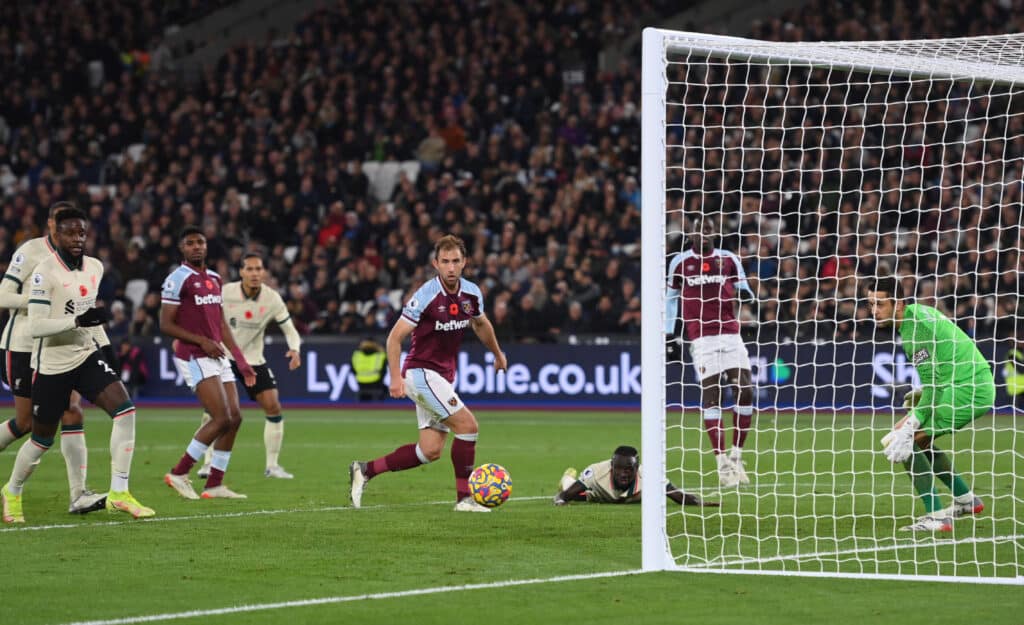 Liverpool should have taken the lead after a well-worked move saw Alexander-Arnold find Robertson bursting into the box down the left before the Scotsman's square ball looked like being turned home on the volley by Mane, but the Senegalese's effort went straight at Fabianski.

Mane then did well as he beat his man and pulled the ball back for a waiting Salah inside the box, but the Egyptian opted for power as he untypically blasted his shot way off target.

Despite the Reds having two promising chances in the early stages of the half, the hosts were perhaps the more impressive of the two sides, with the likes of Fornals and Benrahma often finding space between the lines and putting Liverpool under the cosh.

With the Reds lacking control in the middle of the park, Klopp began to ready his first change with Thiago readying himself to come on. But the hosts managed to nudge themselves ahead before the substitution through a Fornals finish.

Mane lost the ball in midfield as the hosts broke, with Bowen's through ball seeing Fornals give Matip the slip before getting a shot off at goal, which dribbled into the back of the net through Alisson's hands to make it 2-1 to the hosts.

Thiago eventually came on for the Reds but the change did little to affect the game, with West Ham continuing to mount the pressure. They struck again from a corner to seemingly kill the game off with over 15 minutes left on the clock as Bowen's cross floated over Alisson and on to the head of Kurt Zouma, who headed home to make it 3-1.

Klopp went to plan B as the ineffective Jota made way for Divock Origi before Fabinho was withdrawn in place of Takumi Minamino for the final ten minutes. The changes paid their dividends as Origi turned at the edge of the box and struck the ball into the back of the net with a left-footed finish on the pivot to pull one back for the Reds.

Mane should have equalised for the Reds in added time as Alexander-Arnold's set-piece saw him evade the Hammers defence and look favourite to turn the ball home, but his header dribbled past the far post as a golden chance went begging for the Reds, who eventually succumbed to a 3-2 defeat.