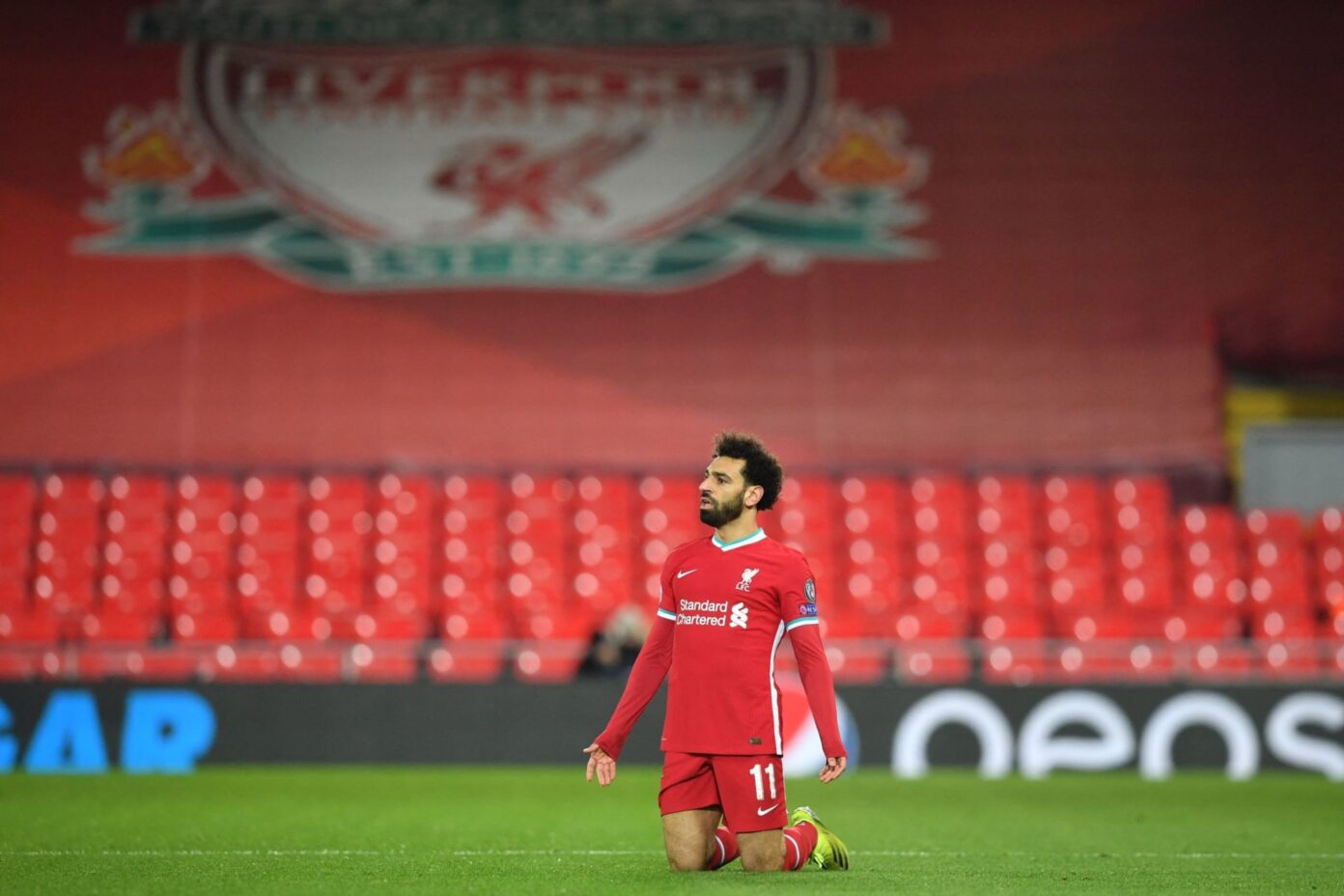 Liverpool flattered to deceive as they played out a goalless draw against Real Madrid, ending their Champions League campaign in the quarter-finals.

The first half was in stark contrast to last week with the Reds looking by far the better side. But despite many promising moments, the two sides went into the half-time break all level on the night.

The second half went much the same way as the first as Liverpool struggled to find their shooting boots against a stubborn Real defence which ultimately held on to keep a clean sheet and knock Jurgen Klopp's side out of the competition.

All focus now remains on the final seven games of the Premier League season as the Reds look to do the improbable and break into the top four and find a place in next year's competition. 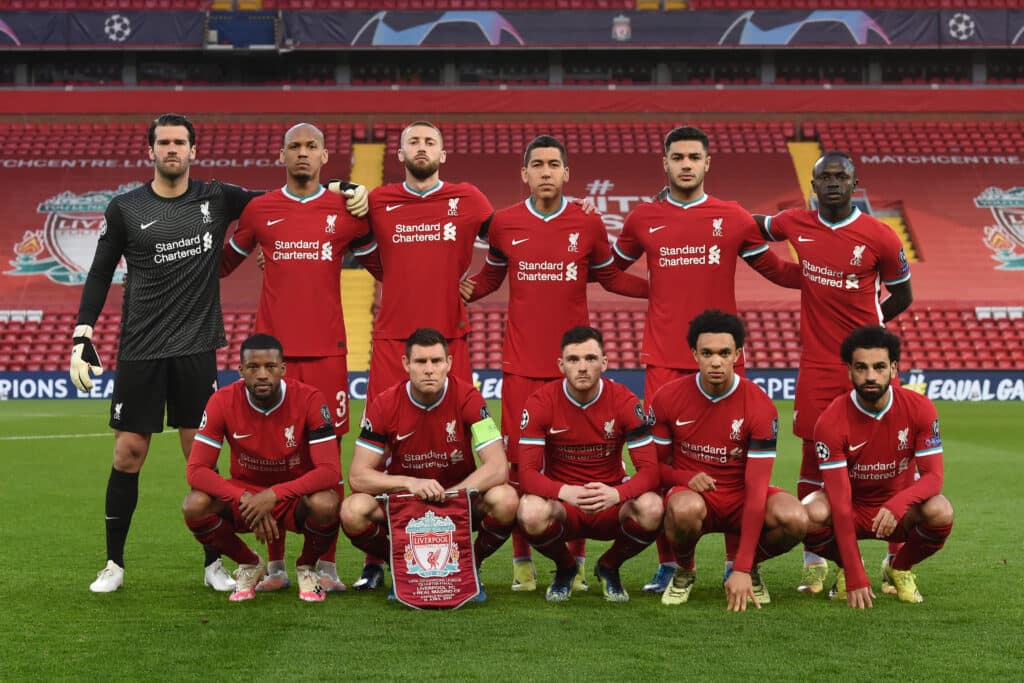 Klopp made just one change from the weekend as Sadio Mane replaced Diogo Jota in the starting eleven. James Milner started in midfield, with the likes of Thiago and Naby Keita on the bench.

Liverpool almost made a dream start as the ball fell favourably to an unmarked Mohamed Salah, who looked odds-on to curl the ball into the back of the net, but the Egyptian's effort went straight at Thibaut Courtois.

The Reds received more early encouragement as Mane nearly found the outstretched Roberto Firmino inside the box, with the Reds winger looking threatening up against makeshift right-back Federico Valverde.

It was a highly impressive start from the Reds, who kept up the pressure on the visitors and looked to press them high up the pitch, much as they may ordinarily have in front of a packed Anfield stadium.

A clever move after winning the ball back on the half-way line saw James Milner with space at the edge of the box, with the Reds midfielder unlucky not to see his curling effort hit the back of the net after another good save by Courtois.

But Madrid played themselves into the game and began to nullify the Reds' early threat with opportunities of their own. An Ozan Kabak deflection from Karim Benzema's attempted pull-back nearly found its way into the back of the net, only for the ball to crash against the post.

Mane could have nudged the Reds ahead during a lull in the game, with Trent Alexander-Arnold's inviting cross just a stretch too far for the Senegalese to make contact. 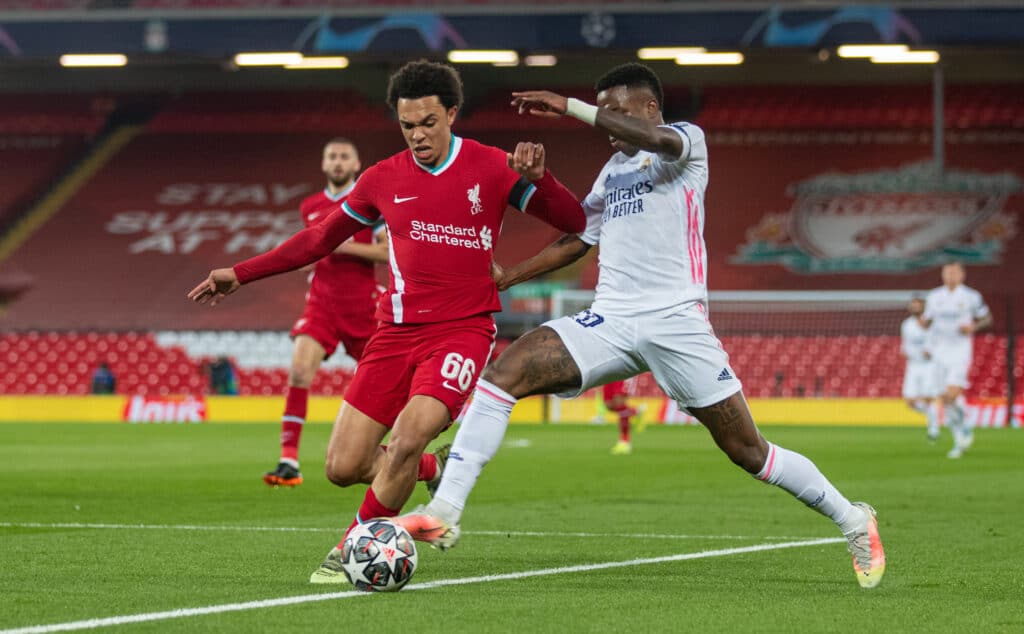 Liverpool's final ball was often lacking, with the Reds unable to take advantage of encouraging positions as Madrid looked to squeeze them into mistakes and launch into a counter-attack of their own.

The Reds should have scored at least one just before half-time but they spurned two glorious chances in quick succession through Salah and Gini Wijnaldum, with the duo both skying their efforts over the bar from inside the box.

Liverpool made another good start to the second half as Firmino turned his defender and found space before forcing Courtois into a good save. The Brazilian had another chance less than a minute later but was unable to turn the ball home.

The visitors delivered a warning a few minutes later as Vinicius nearly found Benzema inside the six-yard box, but Milner made a goal-saving interception to keep the Frenchman at bay. 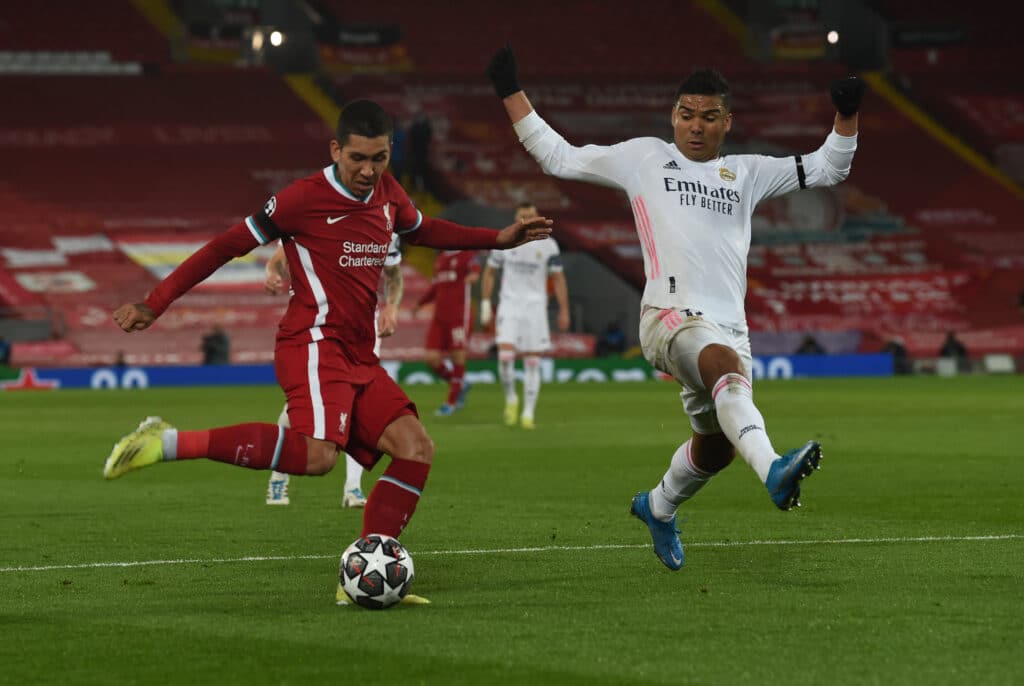 With a little over 30 minutes left, Milner and Kabak made way for Thiago and Diogo Jota, with Fabinho shifting into defence alongside Nathaniel Phillips and Firmino moving into midfield.

A punt over the top by Valverde played Vinicius through on goal, but Alisson came out of his goal and smothered his fellow countryman before falling at the feet of Benzema to deny the rebound.

The Reds rued another missed chance a few seconds later as the ball broke to a free Salah inside the box, but the Reds forward took too long on the ball as his shot was blocked.

The opportunities kept coming but the Reds' lack of clinical finishing continued to haunt them as Firmino and Jota both saw their efforts diverted away from goal.

Alex Oxlade-Chamberlain and Xherdan Shaqiri replaced Mane and Firmino as Klopp's final roll of the dice, with the Reds desperately needing a moment of magic to get themselves back in the tie with less than ten minutes left.