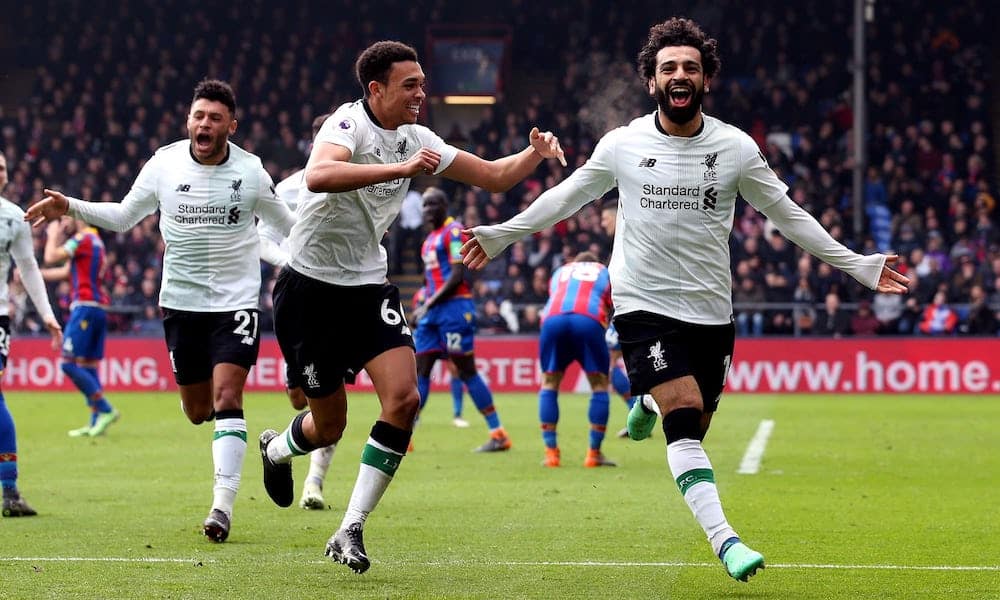 Watch the goals below.

Mohamed Salah scored his 37th goal of the season as Jurgen Klopp's side came from behind to record a 2-1 win over Roy Hodgson's Crystal Palace.

Luka Milivojevic sent Palace ahead from the penalty spot in the 13th minute, however Sadio Mane levelled early in the second half before Salah came up with an 84th-minute winner for the away side.

Liverpool move above Manchester United into second position, with their rivals set to face Swansea City during the later 3pm kick-off.

Trent Alexander-Arnold replaced the injured Joe Gomez at right-back, whilst James Milner was back in the starting eleven alongside Georginio Wijnaldum and Jordan Henderson in the middle of the park.

Palace did not have to wait long to make the breakthrough, with in-form midfielder Milivojevic scoring from the penalty spot in the 12th minute after Loris Karius had brought down Wilfried Zaha - who had raced onto a flick from former Liverpool striker Christian Benteke.

Jurgen Klopp wanted a penalty of his own when Mane went down under a challenge from James McArthur, however the Senegalese attacker was controversially booked for simulation.

Mane then nodded home from close range after a corner in the 30th minute, only for the offside flag to cut Liverpool's celebrations short.

Liverpool were off-colour in the opening 45 minutes as the Eagles entered the half-time break with a deserved one-goal lead.

The Reds, however, levelled just three minutes into the second period, when the ever-present Mane turned a low James Milner cross into the bottom corner of the net.

Liverpool dominated the ball for a short spell following their breakthrough, and only a brilliant block from Mamadou Sakho prevented Salah from finishing past Hennessey in the 54th minute.

Benteke had the two biggest chances of the day to send Palace back ahead just before the hour, however the Belgian skewed his first effort wide of the post before firing over the crossbar again.

Mane was then fortunate to escape a second yellow after deliberately handling the ball just outside the Palace box. Karius was called upon to make make a solid save to deny Patrick Van Aanholt from the resulting free-kick.

Adam Lallana had to be taken off just six minutes after entering as a substitute in the 70th minute, which will be a cause for concern for Klopp and his coaching team.

Both sides were pressing for a winner in the latter stages, Salah proved to be the match-winner once again, as the Egypt international fired an Andrew Robertson cross past Hennessey in the 84th minute to break Palace hearts.