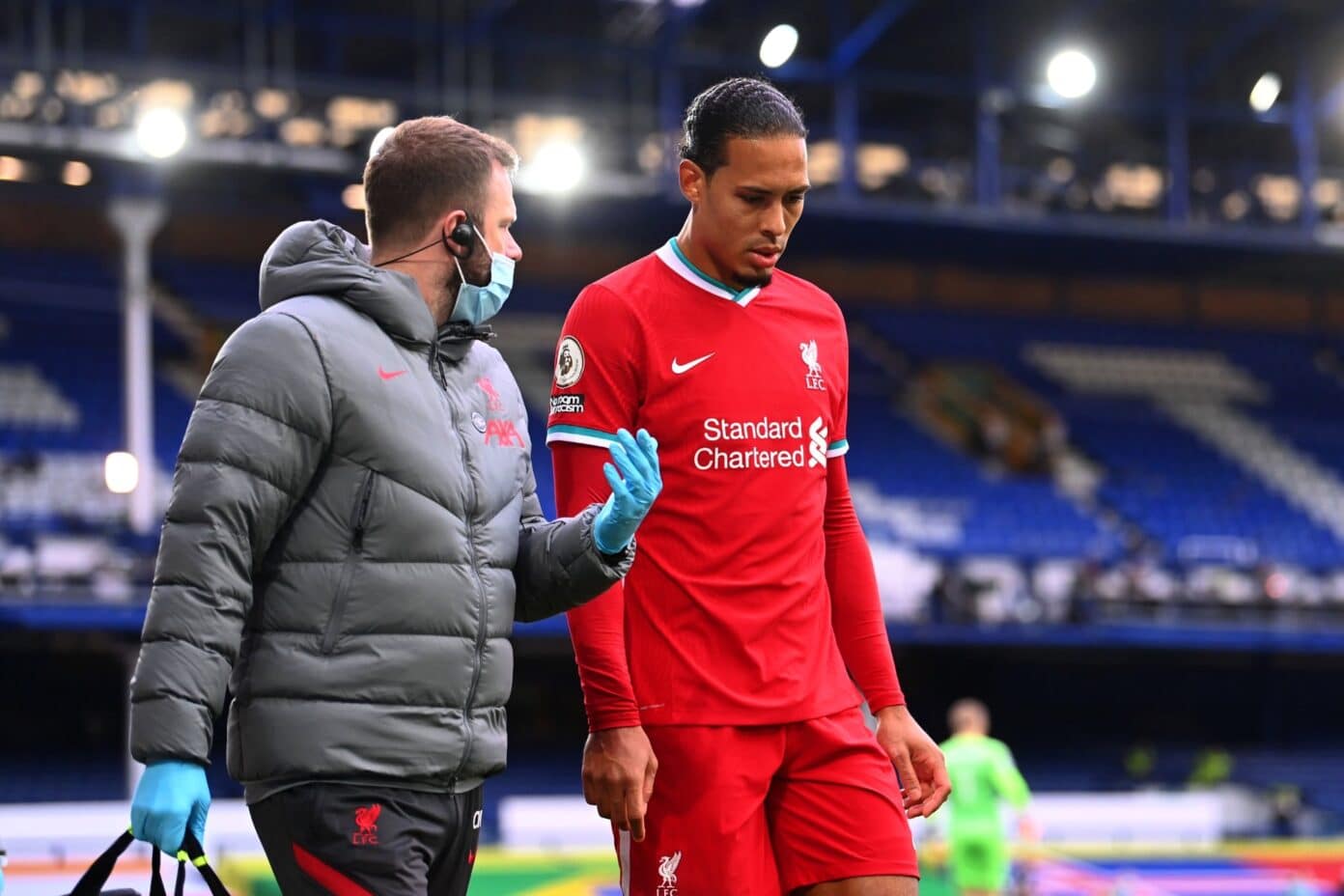 Liverpool are sweating over the fitness of Virgil van Dijk, who is reported to have suffered an anterior cruciate ligament injury.

The Dutchman was withdrawn just ten minutes into Saturday's Merseyside derby draw as Jordan Pickford took him out with what has been described as a potential 'career-ending tackle.'

Van Dijk was in visible discomfort from the moment of impact as he received treatment from the Liverpool physios before gingerly walking off the pitch.

The 29-year-old is so rarely injured but Klopp's comments after the game did little to reassure supporters as he admitted it "doesn't look good."

Van Dijk was pictured leaving hospital on crutches after his scans on Saturday evening, adding further worry to the situation.

During half-time of Manchester City's clash against Arsenal, broadcaster beIN Sports' Richard Keys stated on air that Van Dijk has "done his ACL", according to their sources.

"Information that we're receiving is that he's done his anterior cruciate ligament. If that is the case, he will be out for the best part of 7-8 months," Keys said.

While further news is expected within the next 24 hours, the early signs are ominous for the Reds.

An injury of this magnitude would be a huge blow for Liverpool and Van Dijk, with a timeline of 7-8 months effectively ruling him out for the rest of the 2020/21 season.

There are also growing concerns over the fitness of Thiago Alcantara, who joined Van Dijk in hospital for scans after being on the receiving end of Richarlison's wild tackle, which saw the Brazilian sent off.

Thiago finished the rest of the game but Klopp confirmed later the Spaniard had suffered an injury after informing him he felt something was amiss after the tackle.

The Reds midfielder is believed to have swollen leg after the game, which is likely to see him miss Wednesday's trip to Ajax, even if he hasn't suffered any long-term damage.

The club is expected to confirm the prognosis for both players on Sunday, with an absence of any duration a huge setback to Klopp's plans.

The 237th Merseyside derby finished 2-2, with Jordan Henderson seeing his injury-time winner seemingly incorrectly ruled out for offside by VAR.

Sadio Mane had put Liverpool ahead just three minutes in, before Michael Keane levelled midway through the first half.

Mohamed Salah scored his 100th Liverpool goal to make it 2-1, but Dominic Calvert-Lewin headed past Adrian to even the scores not long after.

Richarlison's lunge on Thiago saw the Blues forward sent off, minutes before Henderson's goal was chalked off for offside.