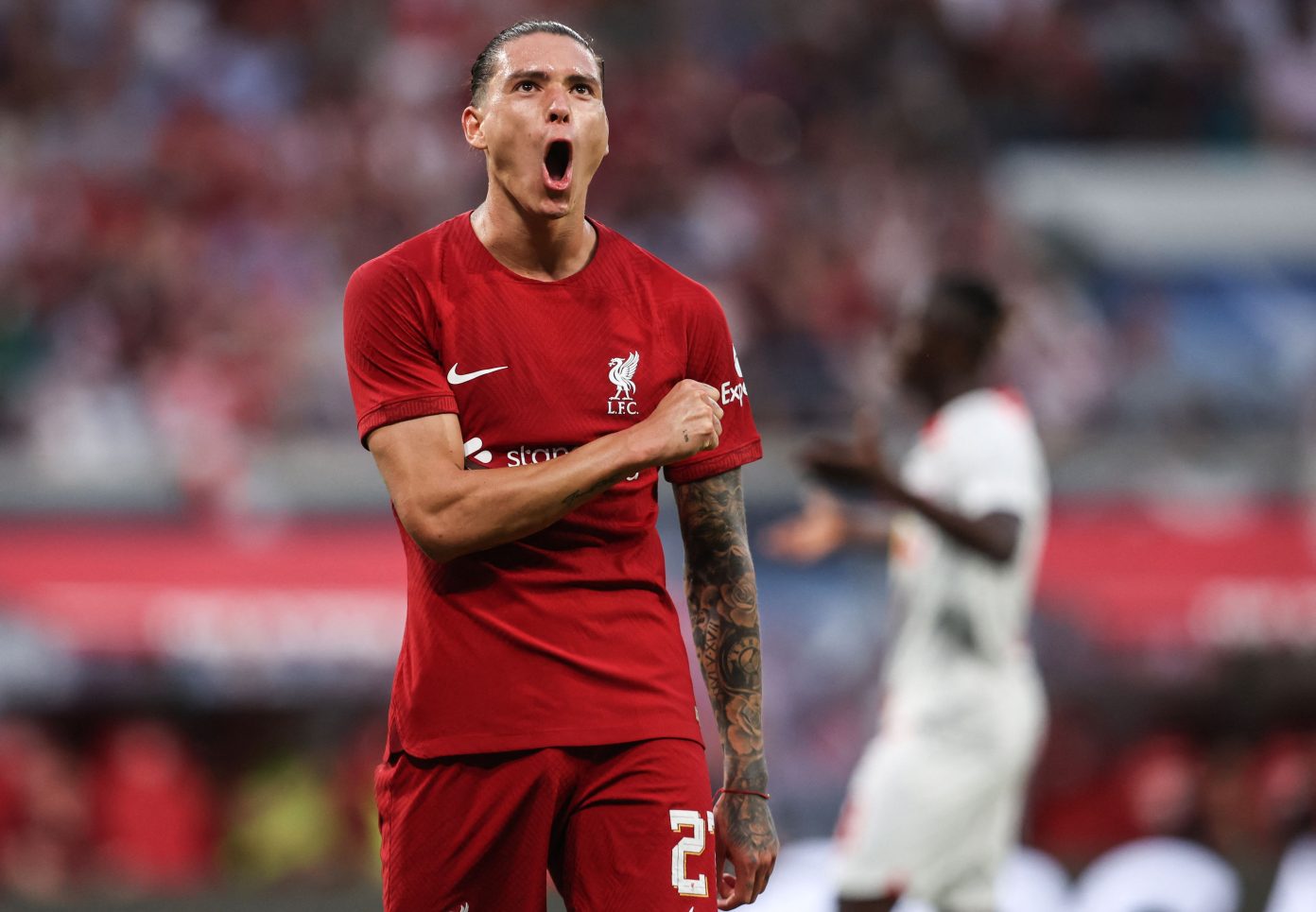 Facing their first true road test of the season against RB Leipzig inside a soldout Red Bull Arena in Germany, Liverpool passed with flying colors. Darwin Núñez silenced his critics, coming off the bench  after the halftime break to score four goals in the final 45 minutes of play. Núñez becomes the first Liverpool player to bag four goals in a single contest since Mohamed Salah turned the trick vs Watford in 2018.

The Reds started the match on the front foot as Salah threatened with a long run toward the Red Bull goal in the opening three minutes. The ball fell to him inside the box in the 8th minute and he slotted a shot past RB Leipzig goalie Peter Gulacsi for a 1-0 Liverpool lead.

After the goal, the home side began to settle into the game, enjoying a long spell of possession. As a result, they earned a corner kick in the 20th minute, but the chance was cleared by the Reds’ defense.

Liverpool also earned a corner in the 35th minute and a cross fell to Thiago Alcantara, but he mishit the resulting shot and it sailed over the bar. Angelino nearly equalized with a strike from outside the box in the 40th minute, but the chance was cleared. Adrian was called into action late in the half as Leipzig star striker Christopher Nkunku had a one-on-one opportunity, but the Reds keeper came away with the save to keep his team in the lead, 1-0 at the half.

Luis Diaz was fouled in the box by the backup Red Bull keeper in the 48th minute. Núñez took the resulting penalty and buried it for his first tally in a Liverpool shirt, putting the Reds up 2-0 in the process. Three minutes later,  Núñez struck again with a quality finish close to goal as Liverpool led 3-0.

Núñez was far from finished, however, completing his hat trick in the 68th minute when he put a cross in the back of the net for a 4-0 lead. Núñez capped off his day with another strike on the final touch of the game in the 90th minute to seal the 5-0 win.

As impressive as the final score was it could have been even more lopsided. Liverpool peppered the Red Bull goal with 14 shots, putting 7 on frame.

Liverpool returns to Red Bull Arena for thier next preseason fixture as they face RB Salzburg on July 27th at 19:00 BST.

Man of the Match - Darwin  Núñez

This is an easy choice. A hat trick is rare in club football, no matter the type of match, friendly or otherwise. Scoring four goals raises the performance to legendary status as it has only occured a handful of times in the past decade. After receiving criticism for failing to scratch the score sheet in his first two outings, they have turned to cheers and Núñez  has yet to play in an EPL match.

As a supporter, player or manager, you never want to read too much into a pre-season fixture, but after the Reds dominate performance and 5-0 win, its hard not to. Yes, Nunez was the star of the show and deservedly so, but strong play from the supporting cast makes it hard to find falt with any aspect of Liverpool’s play on the pitch.