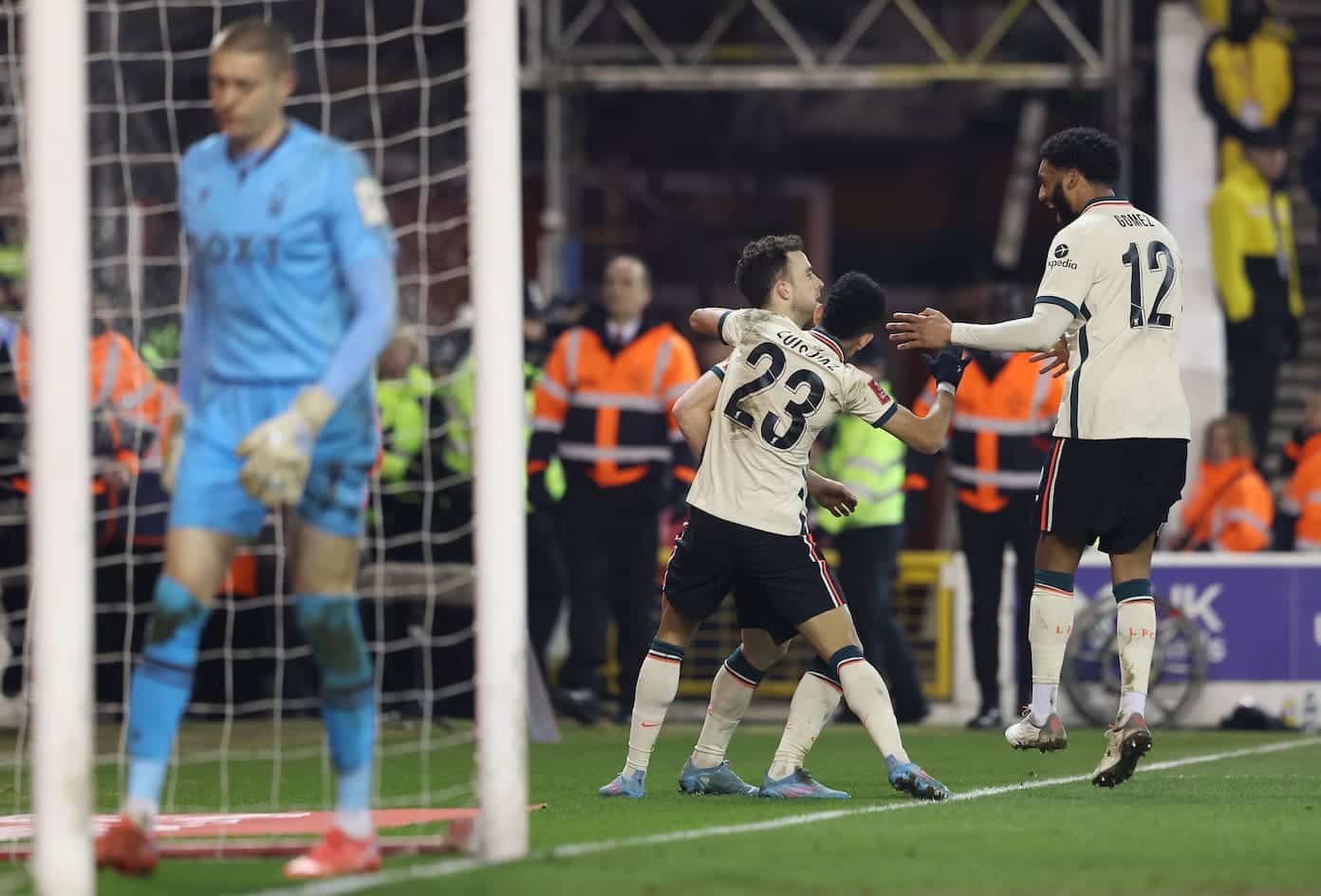 Liverpool overcame Championship side Nottingham Forest 1-0 thanks to a late effort by Diogo Jota as they booked their place in the FA Cup semi-finals next month.

It was a lively opening 45 minutes at the City Ground as Liverpool dominated proceedings, but the Reds were unable to make their possession count as the two sides went into the break on level terms.

Liverpool continued to find it tough to find the breakthrough in the second half, with Nottingham Forest having chances of their own, notably through Philip Zinckernagel, who was unable to find the back of the net following a quick counter attack.

But Diogo Jota poked home from close range from Kostas Tsimikas' cross to give Liverpool a late victory as Jurgen Klopp's side set up a semi-final clash against Manchester City at Wembley next month. 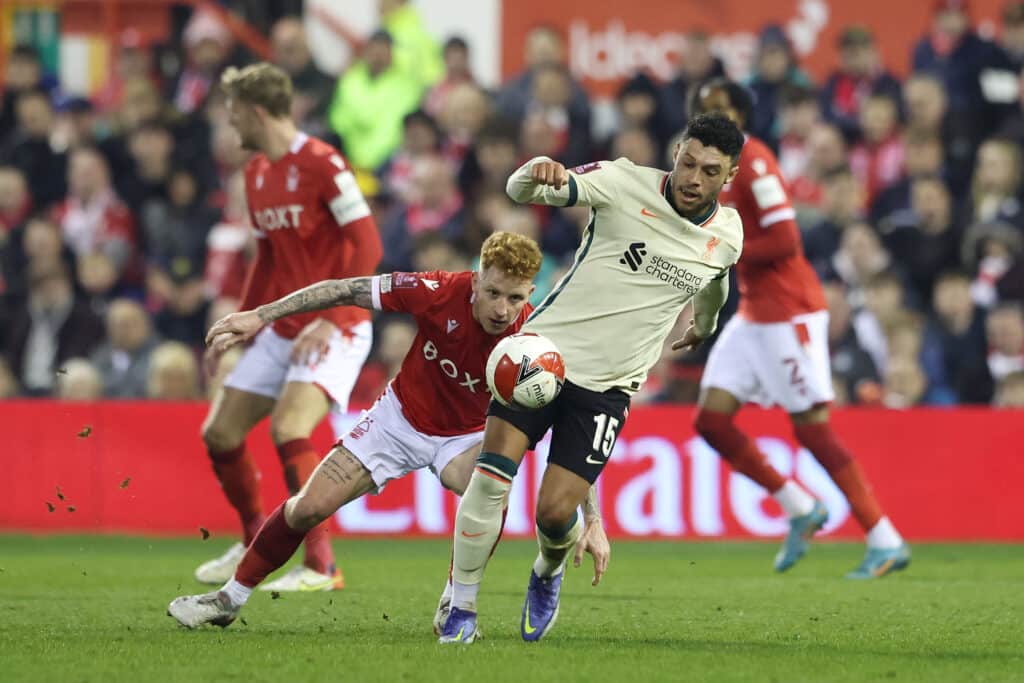 The boss made seven changes from the side that beat Arsenal in midweek, with the likes of Joe Gomez, Ibrahima Konate and Kostas Tsimikas coming into the backline. Naby Keita and Alex Oxlade-Chamerbalin started in midfield, whilst Harvey Elliott and Roberto Firmino joined Diogo Jota in attack.

Liverpool dominated the ball in the early proceedings in front of a raucous City Ground crowd but the hosts did well to thwart any promising attacks from imposing into their penalty area.

Jota opted to let the ball run instead of shooting from close range following Gomez's pullback on the rare occasion the Reds got in behind, whilst Tsimikas went for the spectacular from outside the box, but the Greek international's half-volley sailed over the crossbar.

An error by Forest defender Jack Colback allowed Firmino the chance to run through on goal, with Jota in support of him, but the Brazilian's chipped effort was kept out by goalkeeper Ethan Horvath, who denied him again with his follow-up header.

It was frenetic at times as the Reds penned Steve Cooper's side inside their own half, but goalscoring opportunities remained far and few between. Gomez had a half-chance as he latched on to a bouncing ball inside the area, but the makeshift right-back was unable to keep his effort down as it fired over the crossbar. 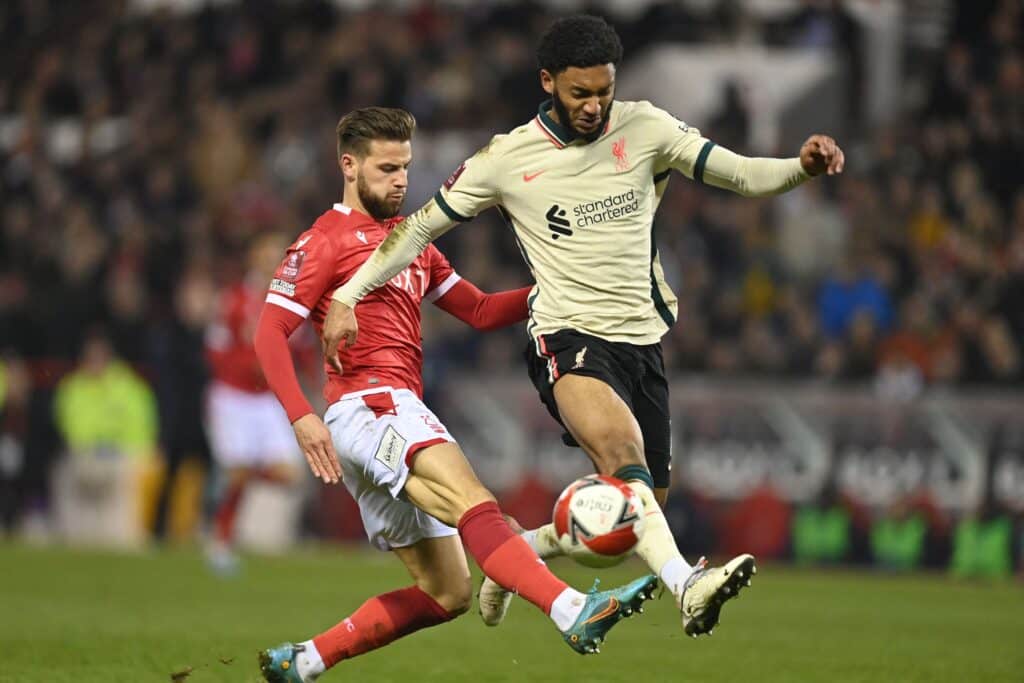 The hosts had early moments of encouragement at the start of the second half which provided renewed energy for the home crowd to feed on, although two strikes in quick succession by Jota and Oxlade-Chamberlain could have given Klopp's side the lead.

With the game remaining at a stalemate at the hour mark, the boss made a quadruple change to bring on Thiago, Jordan Henderson, Luis Diaz and Takumi Minamino in place of Fabinho, Oxlade-Chamberlain, Keita and Elliott.

An incisive ball by Firmino nearly played Diaz through on goal within minutes of coming on, but his pass was a touch overcooked as the goalkeeper rushed out to deny the Colombian from reaching the ball.

Liverpool breathed a huge sigh of relief as a quick counter-attack saw Forest break down the right and Brennan Johnson's cross finding midfielder Philip Zinckernagel, who was unable to steer his effort at goal.

The Reds finally broke the deadlock through Jota, who snuck in at the far post and latched onto Tsimikas' in-swinging cross after the left-back had checked inside, with the Portuguese international poking the ball home to make it 1-0. 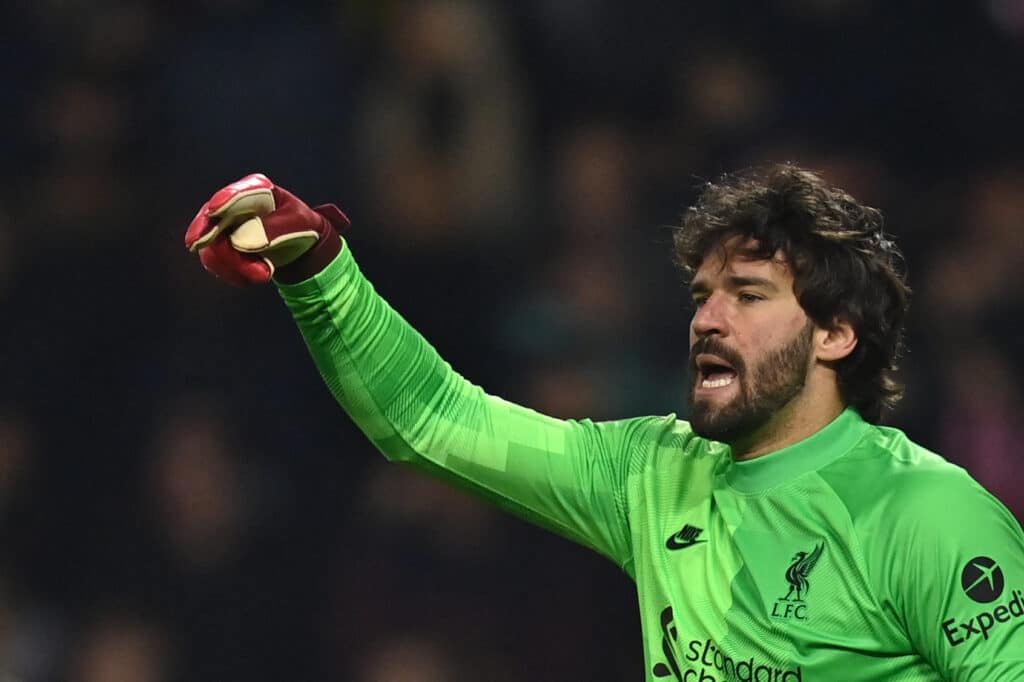 A challenge by Alisson, who had rushed out of his goal, on midfielder Ryan Yates saw the home crowd in an uproar before it was reviewed by VAR, but no further action was taken much to Liverpool's relief.

Yates was on the end of Johnson's cross minutes later as he found space behind Konate and directed a header towards goal, but the ball looped safely into the arms of Alisson who calmly collected without consequence.

A long ball evaded the Reds' defence as substitute Cafu got in behind van Dijk and chested the ball down before firing at goal, but his strike fired over the crossbar as the hosts wasted yet another opportunity.

It ultimately finished 1-0 to Liverpool, despite Cooper's side's best efforts, with the Reds now jetting away on international duty for a fortnight before entering the final weeks of the season, which will now include a trip to Wembley to face Man City in the FA Cup semi-finals.