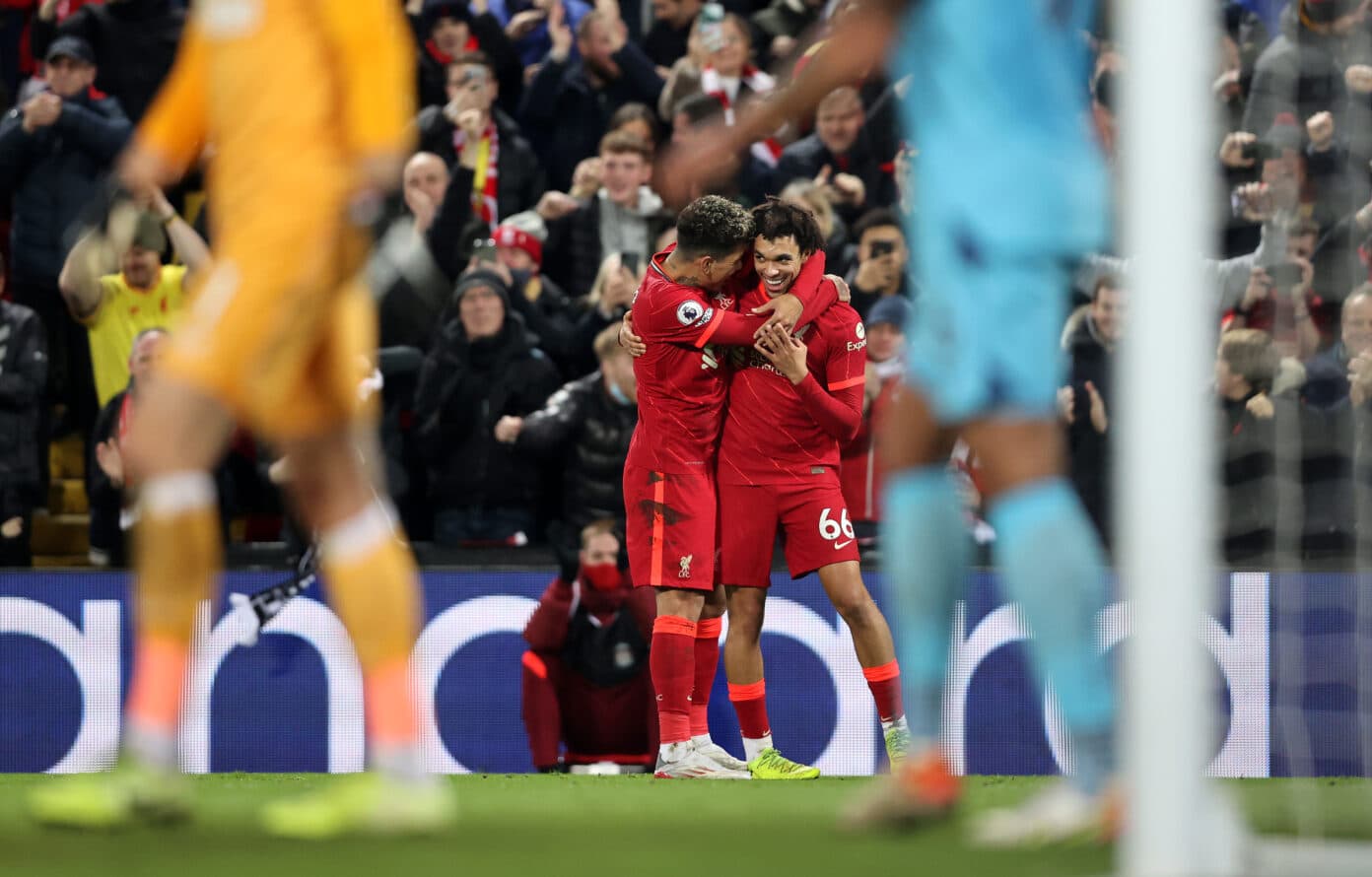 Goals from Diogo Jota, Mohamed Salah and Trent Alexander-Arnold saw Liverpool come from behind to beat Newcastle United 3-1 at Anfield on Thursday night.

Jonjo Shelvey gave Newcastle a surprise lead inside the opening ten minutes from a strike from the edge of the box but goals from Jota and Salah gave Liverpool the lead at halftime.

It was far from vintage Liverpool in the second half as the visitors dug in deep and restricted Jurgen Klopp's side from creating any clear-cut chances, but a Trent Alexander-Arnold rocket in the closing stages handed the Reds a 3-1 win.

The result sees Liverpool stay within one point of league-leaders Man City, whilst they sit three points ahead of third-placed Chelsea, who dropped points at home to Everton in the other fixture of the night. 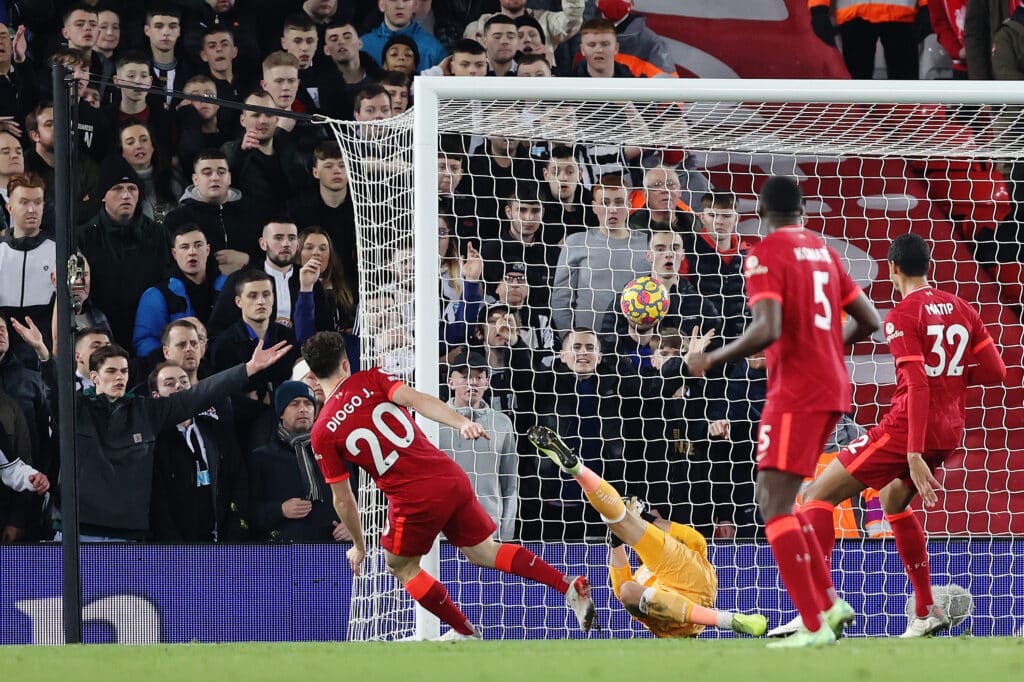 Virgil van Dijk, Fabinho and Curtis Jones were not involved after the trio were suspected COVID-19 positive, with Ibrahima Konate and Diogo Jota coming into the side and Alex Oxlade-Chamberlain slotting back into midfield.

Liverpool dominated the ball in the early stages with Mohamed Salah looking particularly threatening down the right and Jota having the first strike at goal inside the opening six minutes, forcing Martin Dubravka into a good low save.

But Newcastle took an unexpected lead just seconds later as Thiago's clearance fell to Jonjo Shelvey at the edge of the box, with the former Reds midfielder calmly whipping the ball past Alisson and inside the far post to make it 1-0 to the visitors.

Liverpool looked for an immediate response as a well-worked move saw Sadio Mane hit the post from close range after being found by an incisive Salah pass, but the linesman had flagged for offside nonetheless.

Konate should have arguably done better from Trent Alexander-Arnold's out-swinging corner, with the Frenchman left unmarked inside the box, but he was unable to keep his header on target. 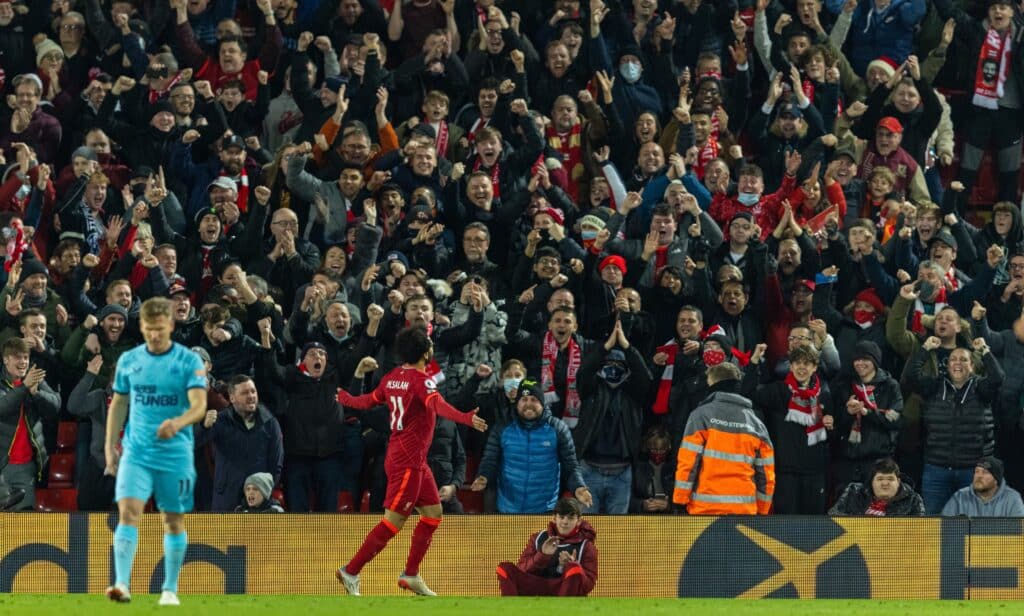 A powerful run forward by Jota saw him evade the Newcastle midfield and burst into the box before drilling a low shot at goal, but his effort went inches wide of the near post.

But the Portuguese forward had the ball in the back of the net seconds later as his initial header was saved well by Dubravka before he capitalised on the rebound to turn the ball home and equalise for the Reds.

A mistake by Thiago saw him give the ball away and allow Allan Saint-Maximin the chance to go through on goal and put the visitors back in front, but Alisson got down well to make the save before Matip cleared the danger.

The Reds then went ahead as Shelvey's blind backpass was pounced upon by Mane, who rode a challenge by Fabian Schar before prodding the ball at goal. Dubravka parried the effort into Salah's path, who made no mistake as he smashed the ball home to give Liverpool the lead.

A first-time cross from the outside of his foot by Salah was nearly inch-perfect and ready to be turned home by Mane inside the six-yard box, but Schar made a crucial interception to thwart the danger. 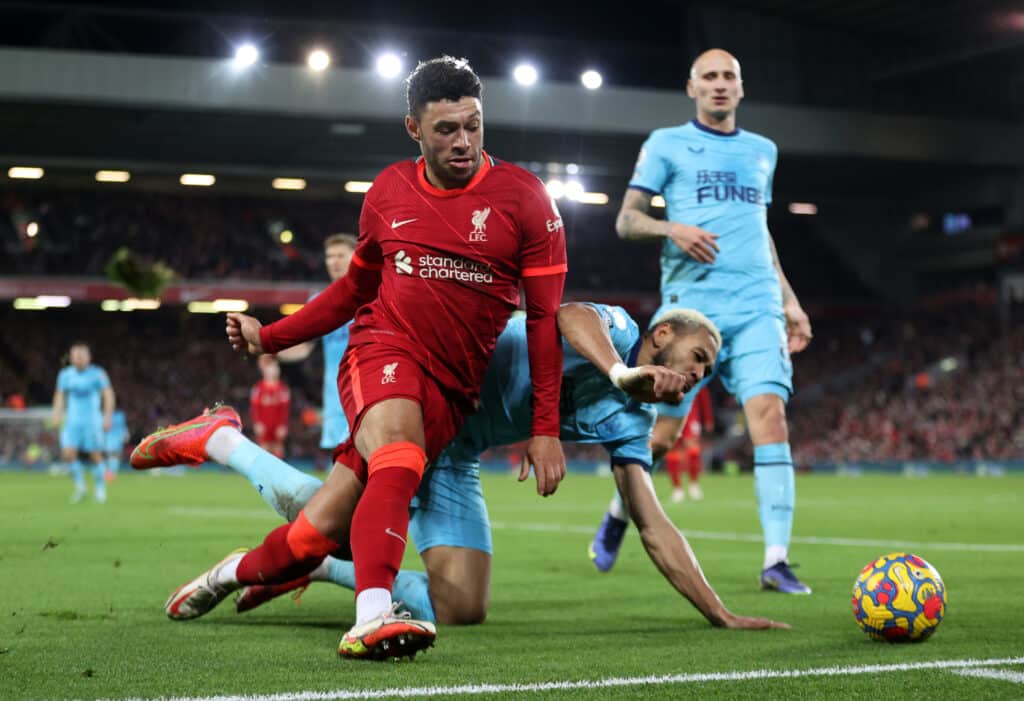 Salah should have made it three as Alexander-Arnold's lofted ball over the top was run on to by Salah, who beat his defender and looked to roll the ball into the back of the net with his right foot, but his finish untypically went wide of the far post.

Eddie Howe's side made it more challenging for the Reds to find any openings at the start of the second half, with the Reds dominating possession but unable to create any chances of note.

Dubravka made an important intervention to deny Jota the chance to convert from Mane's pull-back before Jacob Murphy went close at the other end with a shot from distance that ultimately failed to hit the target.

With the Reds struggling to get going for the majority of the second half, Roberto Firmino made his return from a hamstring injury as the Brazilian came on alongside Naby Keita, with the duo replacing Salah and Oxlade-Chamberlain.

Mane latched on to a through-ball by Keita as he nearly prodded the ball home, but for a save by Dubravka, before Jota was denied a second goal as Isaac Hayden cleared the ball off the line.

Liverpool clinched the three points in the closing stages as Alexander-Arnold picked the ball up from 25 yards out and unleashed a powerful strike into the top corner, leaving Dubravka with no chance as the Reds made it 3-1.

It was far from straightforward in the second half, but it's job done for the Reds, who now turn their focus to Sunday's trip to the capital to take on Tottenham.