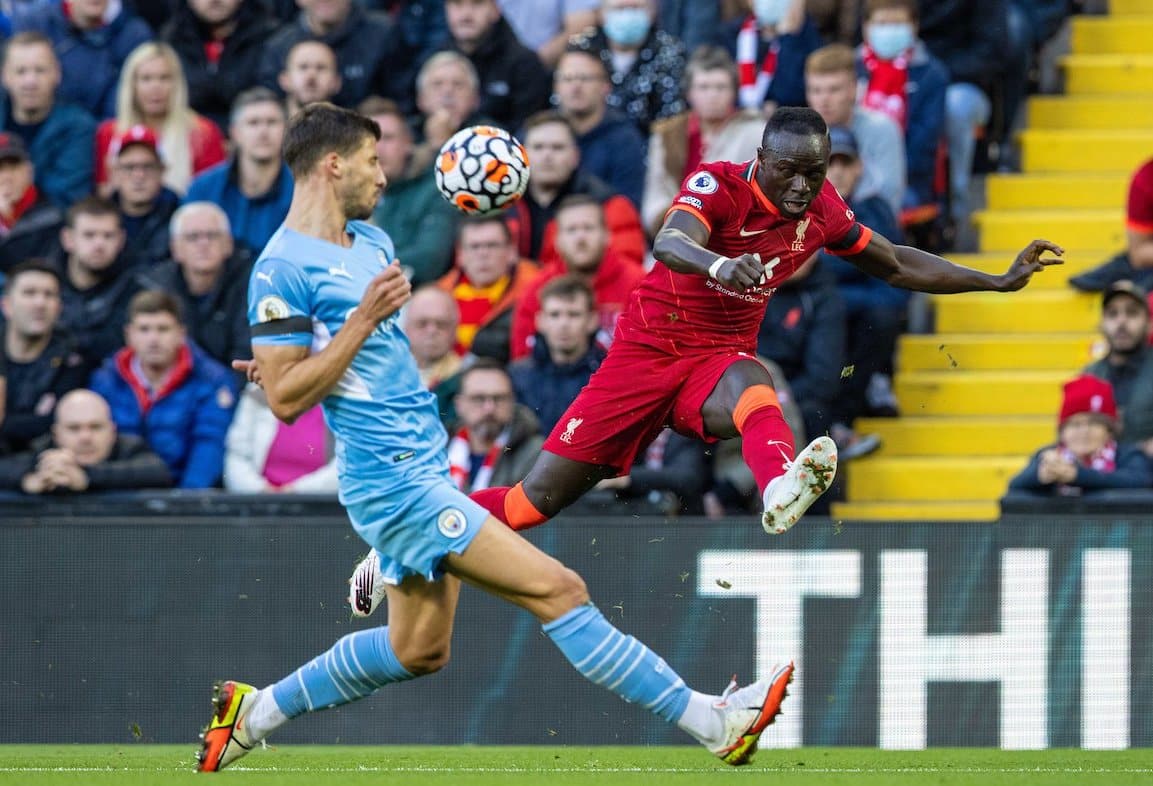 It finished all level at Anfield on Sunday afternoon as Liverpool and Manchester City played out a thrilling 2-2 draw before heading into the international break.

Liverpool were lucky to go into the break on level terms after Manchester City dominated large spells of the first half, with Alisson producing a couple of key moments to keep the score at 0-0.

The Reds nudged ahead before the hour mark through a well-worked Sadio Mane strike, but the goal was cancelled out by Phil Foden's low finish at the Kop end to make it 1-1.

Mohamed Salah scored a supreme goal as the Reds nudged ahead once again but a deflected Kevin de Bruyne strike secured a point for the hosts as it finished two goals apiece after a chaotic second half. 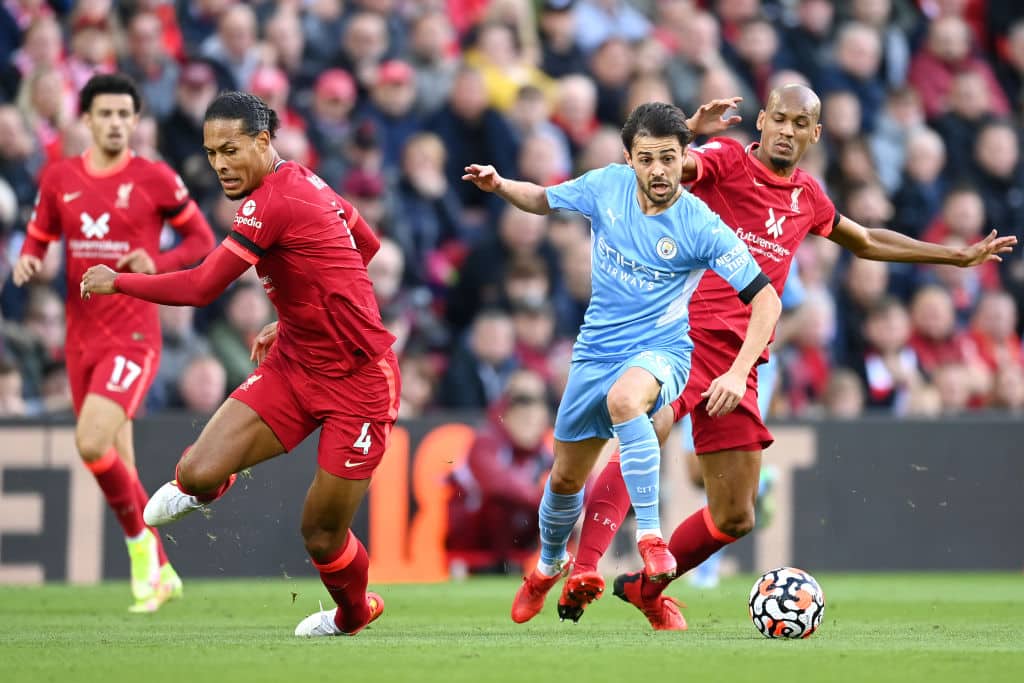 Jurgen Klopp named an unchanged starting eleven from midweek as James Milner continued at right-back and Curtis Jones retained his place in midfield.

Chances were far and few between in the opening stages of the first half, despite Liverpool pushing up high in order to set the agenda and impose their game on the visitors.

There was an unwanted flashback to February's 4-1 defeat as a poor clearance by Alisson gifted the ball away to Bernardo Silva, who played in Gabriel Jesus, but Joel Matip was on hand to save to Alisson's blushes by putting the ball behind.

Another mistake, this time by Jordan Henderson, saw Bernardo capitalise and power his way through midfield before laying the ball off for Phil Foden, but Alisson produced a solid low save to deny the youngster and keep the scores level.

The Anfield crowd's initial enthusiasm had been wavered somewhat by the antics from the opening 20 minutes, with Pep Guardiola's side growing in the game and looking likelier of the two sides to take the lead. 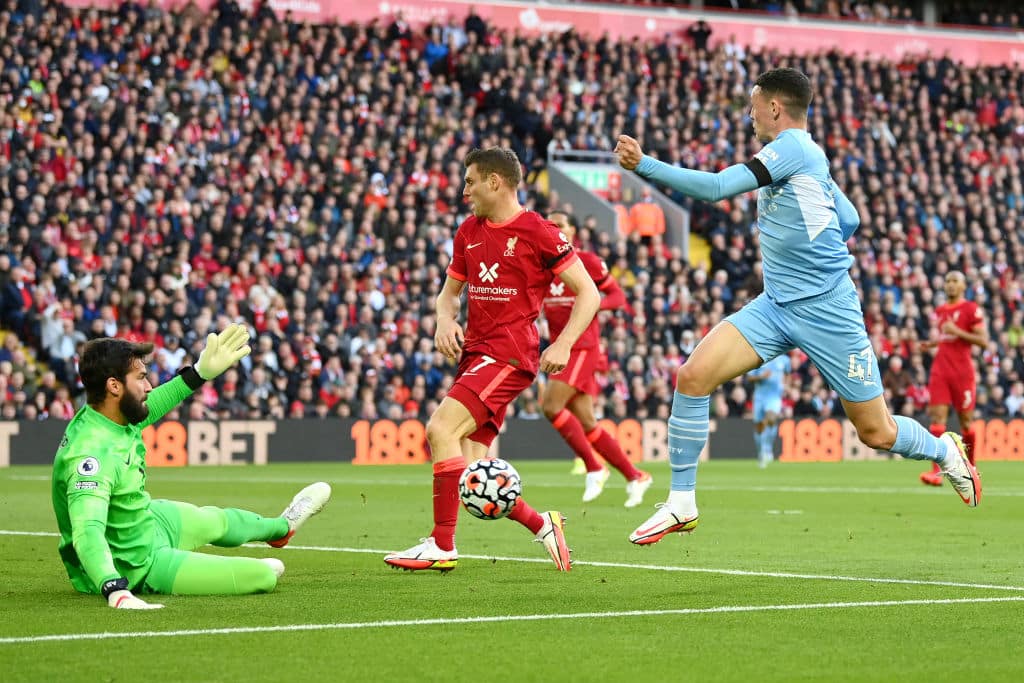 Liverpool looked to tip the momentum back in their favour as they circulated the ball down the right, but there seemed to be a lack of belief going forwards against a well-drilled City defence.

Milner's tackle on Foden at the edge of the box saw the City forward have an appeal for a penalty turned down by referee Paul Tierney before an unmarked Kevin de Bruyne blazed over the crossbar with an overcooked header.

Liverpool found it impossible to clear their lines at times in the latter stages of the first half, with clearances to Mane, Mohamed Salah and Diogo Jota not seeing the ball stick as City kept unleashing waves of attack.

A long ball by Ederson soared over the head of Milner, who was on a yellow card, with Foden getting on the end of it and looking favourite to take the ball past Alisson, only for the Reds goalkeeper to stick a hand out and keep the scores level at half-time.

Liverpool looked to make a fast start in the second half and they were encouraged by a Jota turn and shot at the edge of the box after an incisive pass through the lines by Joel Matip, which forced Ederson into a low save. 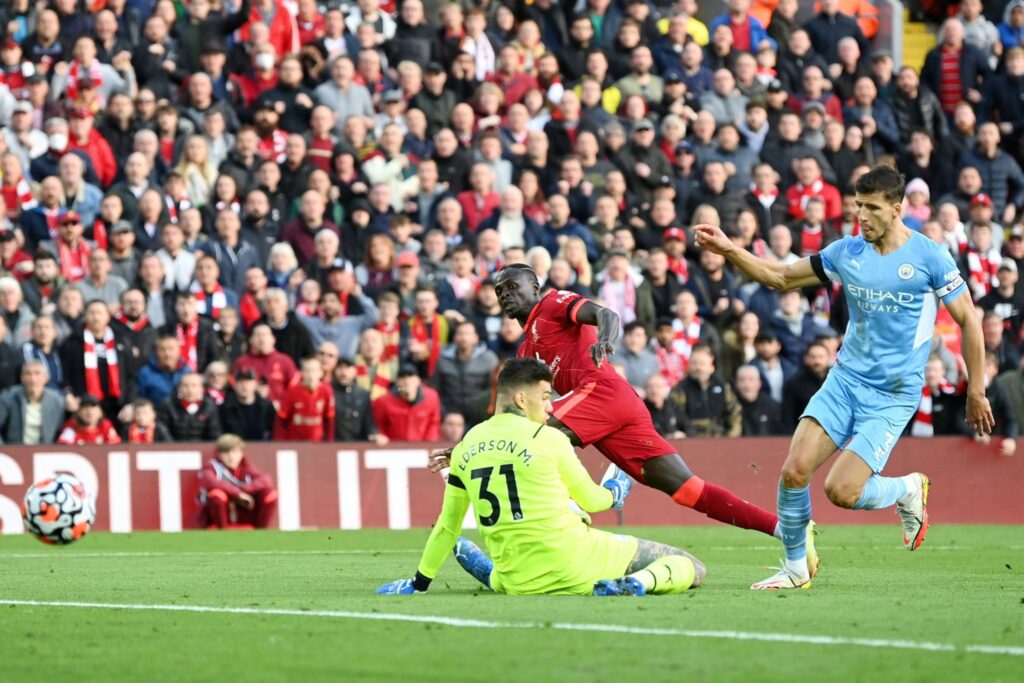 Liverpool finally clicked into gear just before the stroke of the hour mark as Salah drove forward down the right and slid Mane through on goal, with the Senegal international making no mistake with his finish to put the Reds 1-0 up.

The Reds looked energised following the goal as they looked to make the most of Anfield's renewed vigour, with Roberto Firmino soon replacing Jota as Klopp looked for another dimension to his side.

But City responded within a matter of seconds following the change, with Jesus finding Joden inside the box, who found the bottom corner past Alisson with a powerful finish to make it 1-1.

But a majestic burst by Salah, who eluded three City defenders before going around Aymeric Laporte, restored Liverpool's lead with a fantastic right-footed finish to make it 2-1 and put the Reds ahead with a little under fifteen minutes left on the clock. 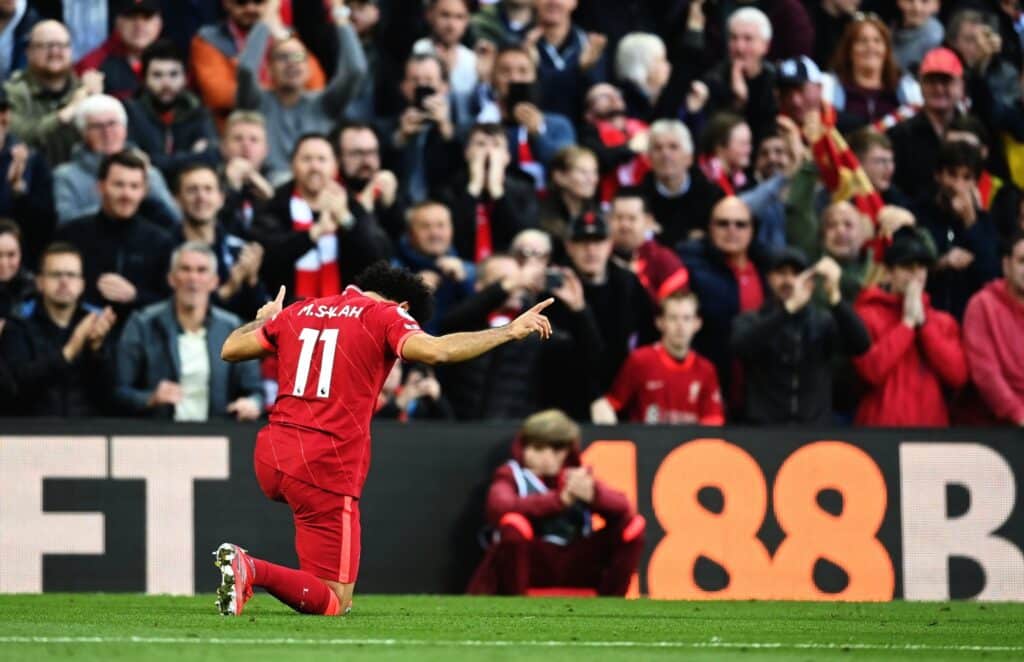 Joe Gomez replaced Milner at right-back soon after the goal, with the Reds' vice-captain perhaps somewhat fortunate to still be on the pitch after making a cynical tackle earlier in the half.

The topsy-turvy nature of the second half continued in the latter stages as the Reds conceded their lead to an excellent strike by De Bruyne, which found the back of the net after clipping Matip on the way in.

Fabinho had a glorious opportunity from a set-piece after the ball fell to the Brazilian in front of an empty goal, but he was denied by a crucial last-ditch tackle by Rodri to save a certain Reds winner.

Both sides looked for a late winner but it wasn't to be as they were forced to share a point, with the Reds sitting in second - a point ahead of City - as they head into the October international break.