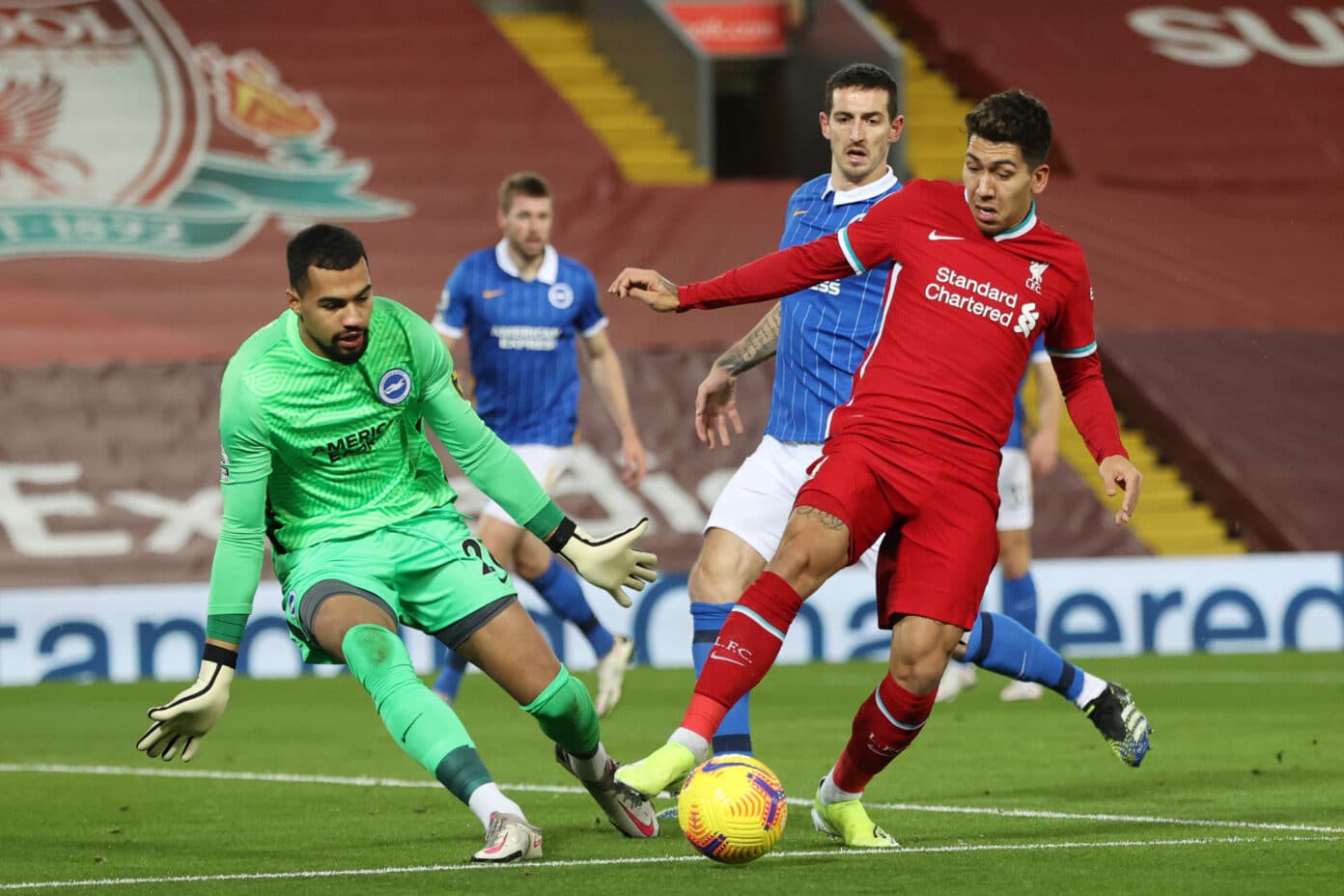 Liverpool's recent revival ground to a halt as Brighton and Hove Albion inflicted a 1-0 defeat on the champions at Anfield on Wednesday night.

Liverpool dominated the ball in the first half but they were lacklustre with it as they failed to create anything of note and went into the break level.

Brighton, who defended superbly, took a surprise lead at the start of the second half through Steven Alzate and Jurgen Klopp's side failed to respond as they fell to a shock 1-0 defeat.

The result is another blow to Liverpool's title challenge ahead of this weekend's clash against Manchester City, with the reigning Premier League champions now seven points behind Pep Guardiola's side, who also have a game in hand. 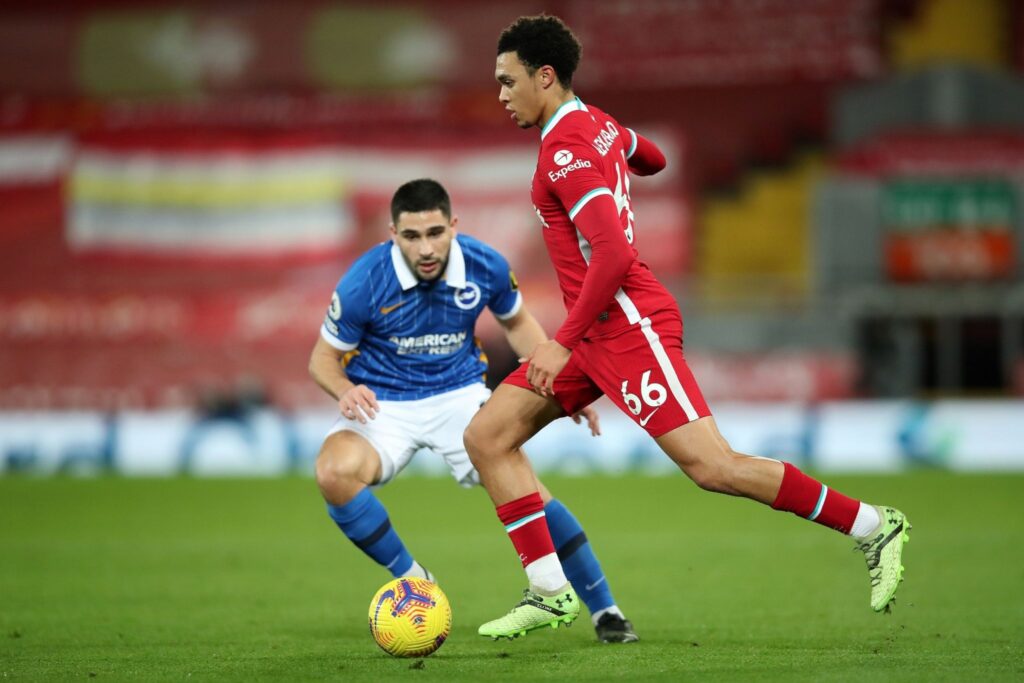 Klopp made two changes to the side that beat West Ham as Caoimhin Kelleher came in for Alisson, who missed out due to illness, whilst Roberto Firmino replaced Divock Origi in attack.

Mohamed Salah had a fantastic chance inside the opening three minutes as he beat the offside trap and latched on to Jordan Henderson's lofted pass, but the Egyptian sent his effort over the crossbar.

Salah started sharp as the Reds looked to release him down the right, but Brighton did well to keep him at bay as their back three looked comfortable despite Liverpool's probing.

The Reds had much of the ball but they were met by a wall of blue on every attack, with Graham Potter's side showcasing their defensive prowess and protecting goalkeeper Robert Sanchez, who had virtually nothing to do in the first half.

Brighton should have taken the lead when Neal Maupay got the better of Henderson and James Milner before getting a shot off at goal. The ball deflected into the path of Dan Burn, but the left-back fluffed his lines and skied over from close range.

The Seagulls looked threatening from set-pieces, with the Reds at a clear height disadvantage against their counterparts. But Nathaniel Phillips made a couple of crucial interceptions to nullify their chances. 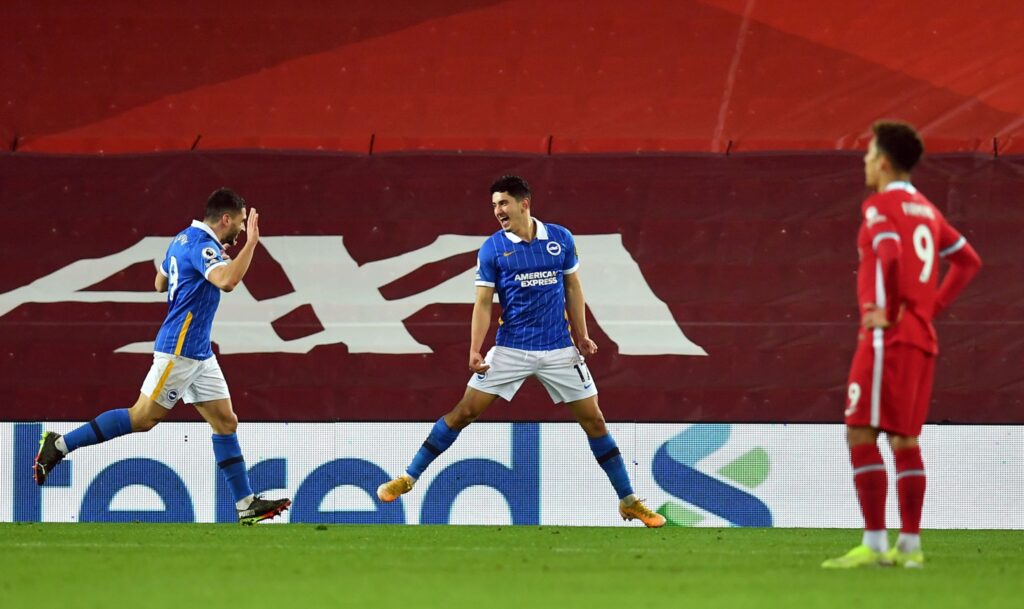 Liverpool had it all to do in the second half and they made a strong start as Firmino came close on two occasions, but it wasn't to be for the Reds as Brighton took a shock lead instead.

Burn crept in at the far post and headed back across goal towards Steven Alzate, who got a decisive touch goalwards to put the visitors 1-0 up a little over ten minutes into the second half.

Liverpool finally quickened their play and nearly grabbed an equaliser through Salah, who was found by Trent Alexander-Arnold's drilled ball into the box, but the Reds forward couldn't divert the ball on target. Brighton nearly doubled their lead as Pascal Gross drew a good save out of Kelleher before Ben White nearly tapped in from the rebound, but Henderson thwarted him just in time.

Despite Liverpool needing a goal, it was Brighton who looked likelier of the two sides to score as Kelleher produced a few crucial saves to keep it at 1-0, with the game fizzling out and Liverpool dropping three points at home.

The result means this is the first time in nine years Liverpool have lost two consecutive games at Anfield, with the Reds now in dire need of a win against title rivals Man City this weekend.