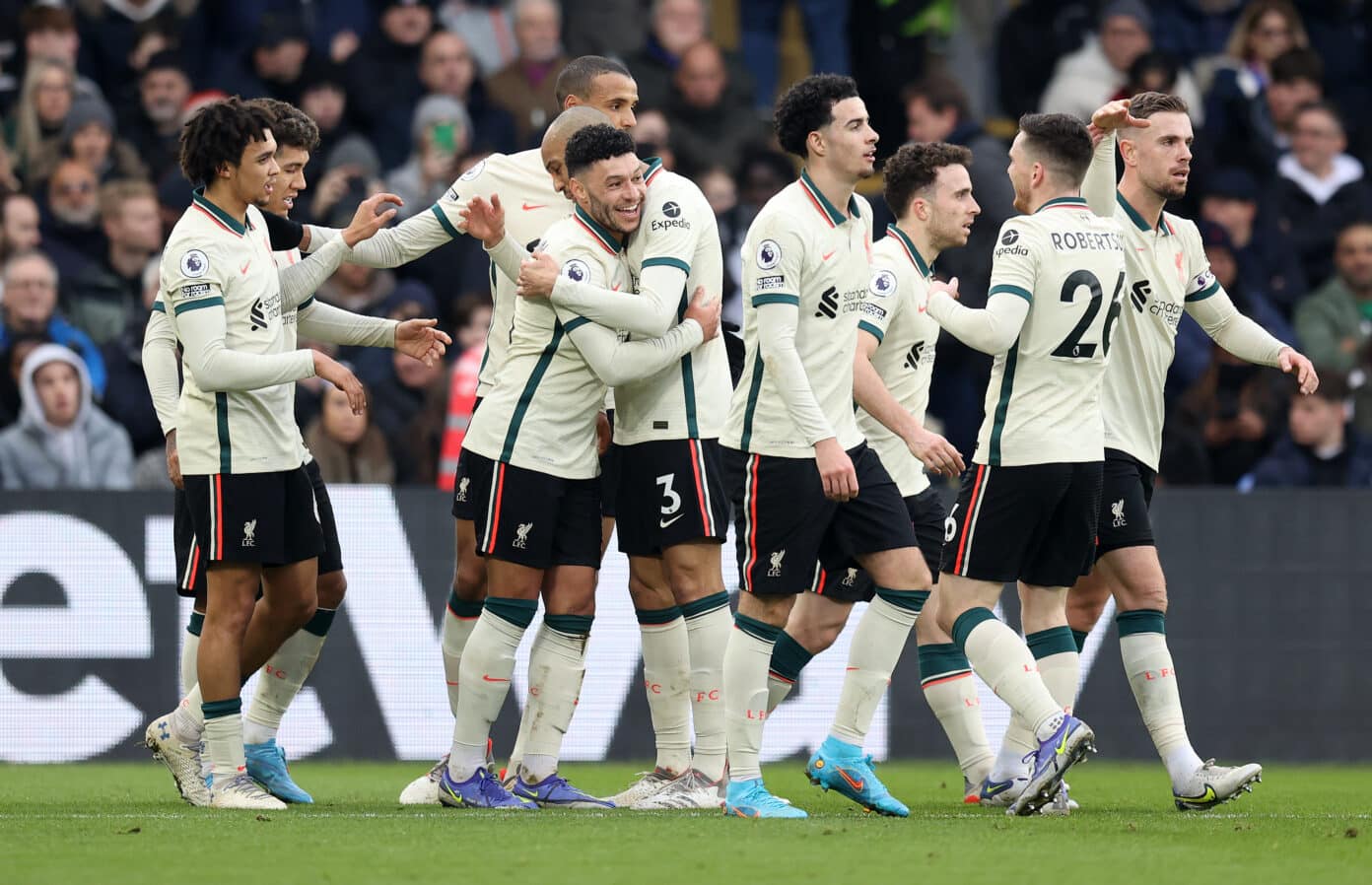 Liverpool survived a second-half scare as they beat Crystal Palace 3-1 at Selhurst Park to cut the deficit at the top of the Premier League table to nine points, with a game to spare.

Goals from Virgil van Dijk and Alex Oxlade-Chamberlain gave Liverpool a commanding 2-0 lead at half-time after an impressive display, although Patrick Vieira's side began to threaten just before the interval, with Alisson called into action more than once.

The hosts picked up from where they left off at the start of the second half and they reduced the Reds' lead through Oddsone Edouard a little less than ten minutes after the break, putting the onus on the Reds to deal with their pressure in front of a spirited Selhurst Park crowd.

But Liverpool secured all three points thanks to a controversial penalty decision in their favour by VAR after a foul on Diogo Jota by goalkeeper Vicente Guaita, with Fabinho slotting home from the spot to complete a 3-1 win. 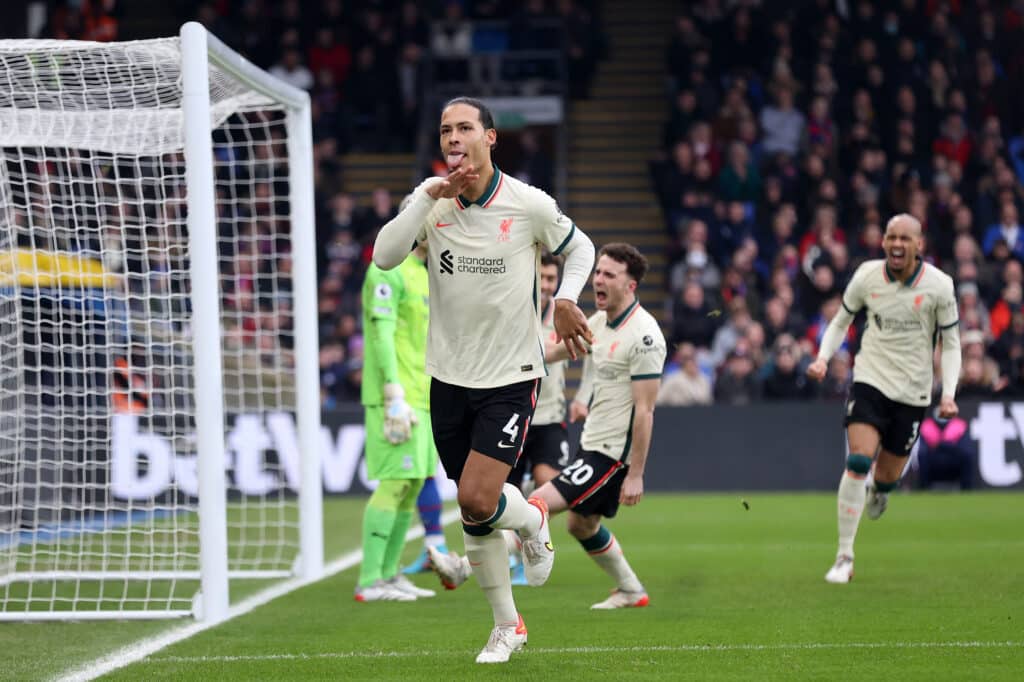 There were two changes to the side that beat Arsenal in the Carabao Cup semi-finals in midweek, with Alisson and Alex Oxlade-Chamberlain replacing Caoimhin Kelleher and Kaide Gordon in the starting eleven.

Liverpool started brightly as they looked to nudge ahead in the early stages, with Andy Robertson and Diogo Jota going close before Jordan Henderson forced goalkeeper Guaita into a good low save.

It didn't take long for the Reds to capitalise on their dominance as Robertson's out-swinging corner was met by Virgil van Dijk, who connected with a bullet header to put Liverpool 1-0 up inside the opening eight minutes.

Liverpool enjoyed the large share of possession as they continued to stream forward and had the hosts pinned deep inside their own half as they went in search of a second, with Oxlade-Chamberlain hitting the side-netting after Robertson's cross towards the back-post.

Patrick Vieira's side began to play themselves into the game and forced Alisson into a reflex save from point-blank range from Jean-Philippe Mateta's strike, although the linesman eventually flagged for offside in the build-up. 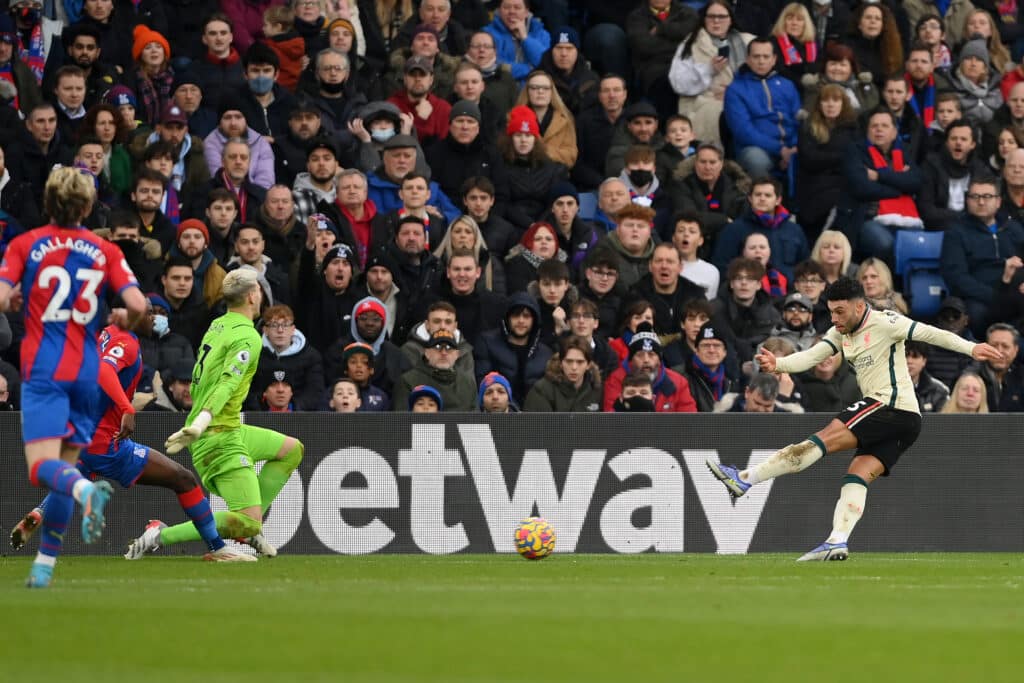 Good play down the left from Firmino saw him cut the ball back for Jota, who in turn set Fabinho up for a strike from just inside the box, but the Brazilian was unable to control his side-footed effort as the ball blazed over the crossbar.

Liverpool doubled their advantage just after the half-hour mark as an exquisite Liverpool passing move was capped by Oxlade-Chamberlain, who controlled Robertson's cross at the far post before finding the back of the net with an excellent left-footed finish past Guaita.

A sloppy pass across the back four by Joel Matip allowed Palace forward Michael Olise the chance to pull one back, but the Frenchman's effort went straight at Alisson, who was called into action again just moments later.

Olise was involved again as another error - this time by Firmino - provided him with the ball before he looked up and slid Mateta through on goal. Alisson came out and got his fingertips on the striker's effort, which ultimately flashed across the face of the goal and behind.

Palace started the second half strongly as Conor Gallagher, who made a run from deep, connected with an Olise pass and headed just wide of the far post before Alisson made a fantastic low save from Odsonne Edouard's attempted backheel from close range. The home side continued to impose themselves on the Reds and they halved the deficit less than ten minutes after the restart as Mateta beat the offside trap and went through on goal before laying the ball off for Edouard, who had the easy task of rolling the ball into the back of the net to make it 2-1.

Liverpool were required to weather the storm in the following minutes as Crystal Palace pushed on, with Klopp responding by tweaking the system and bringing on Takumi Minamino in place of Oxlade-Chamberlain.

The Reds managed to stem the flow of chances but they were unable to keep hold of the ball for sustained periods or exert any sort of control on the game, with Vieria's side pushing up high and committing bodies forward.

Alisson came to Liverpool's rescue again as Olise beat the offside trap and looked to lob the Brazilian from distance, but the Reds goalkeeper reshuffled his feet and scrambled back before making a vital save to turn the ball behind.

Despite chances far and few between in the second half, the Reds managed to clinch all three points following VAR awarding them a penalty for a coming together between Guaita and Jota, with Fabinho stepping up to the spot and sending the goalkeeper the wrong way to make it 3-1.

Liverpool could perhaps count themselves somewhat lucky to come away with the win considering Palace's pressure in the second half, but Klopp's side now sit nine points behind league-leaders Man City with a game to hand.