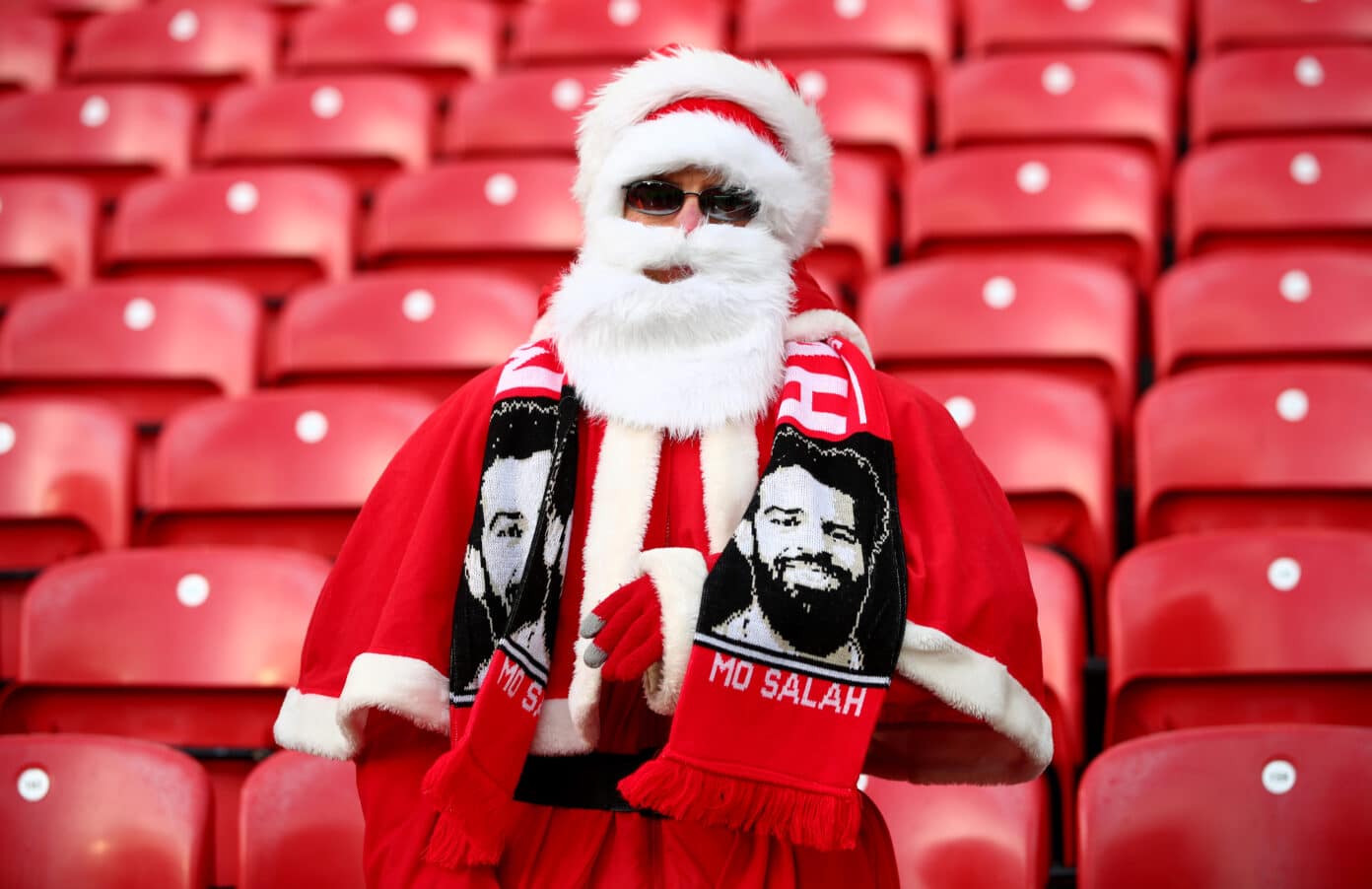 Earlier, we broke down the beginning of Liverpool’s 2022-23 Premier League schedule. It is key for the Reds to get off to a great start if they want to stay one of the EPL’s top teams. Of course, we can’t say for certain where Liverpool will be in the table after the first 3rd of the season.

The hope is that they will be in the mix for the top 4 and not far off the top of the table. They will certainly try their best, they’ll try everything they can.

Now, we’re going to move onto the middle part of the schedule, starting in late October through until late January. Out of the 38 season matches, these are the 5 most notable matches from the second part of the 2022/23 season.

In every previous Premier League season, the middle of the season is dictated by the onslaught of games leading up to Christmas. The old cliche is that most teams either make or break their season in the run-up to the Holidays. While that window is still important in the 2022-23 season, it is important for a whole other reason.

The 2022 World Cup has been moved from its traditional spot at the height of summer in the Northern Hemisphere. It will now be played from the middle of November until the middle of December, causing a pause in every major football league in the world. But, everything will be just fine.

The small country of Qatar is hosting the event and since it is a desert country, holding the World Cup during the summer would be impossible. Temperatures can reach well over 40ºC (~104ºF) in the summer months and heat that intense is potentially deadly.

So, instead of having a jam-packed schedule from November through the Christmas period, Liverpool will have about 6 weeks off. This has never happened before. For some players it will be a welcomed break but, for Liverpool’s best players they will be giving it all for their home countries.

This gap in the schedule will have a massive ripple effect on the rest of the season. It just takes some time to see what those effects will be.

This will be Liverpool’s first match against Nottingham Forest in the Premier League since 1999. Forest were one of the powerhouse teams in England for years and are one of the most respected old clubs in all of the English football pyramid. Liverpool vs. Nottingham Forest had their fair share of run-ins in the past, most notably over 3 years between 1977 and 1980.

It is also worth noting that Forest were the opponents at Hillsborough on that fateful day in April of 1989, often referred to as the Hillsborough disaster.  Nottingham Forest and their supporters are forever linked to Liverpool by witnessing the crash that killed 97 Liverpool supporters on the 15th of April 1989.

The Liverpool vs. Forest rivalry was the best in all of football for a short period in the late 70s and early 80s. Nottingham Forest were a world power under flamboyant manager, Brain Clough. The Reds were guided at the time by no-nonsense manager Bob Paisley.

The two teams battled it out 13 times over 3 years in the old First Division and domestic and European cup competitions. There is a lot of history between the clubs and this match should not be missed by those who have a reverence for football’s past.

Ordinarily, a mid-November match against Southampton wouldn’t be all that newsworthy at this point of the season. This is the last match before the much anticipated World Cup break.

Normally, the 2nd week of November would be the beginning of the holiday fixture list heating up. Instead, the whole thing is going to be put on hold for 6 weeks. Obviously, this will be the last time the Anfield faithful will get to see the Reds before Christmas.

Liverpool took all 6 points from the Saints last season, 2021/2022, including a 4-0 pounding at Anfield on the 27th of November. The hope is that they will continue their dominance over Southampton and go into the World Cup break on a high note.

It’s worth noting that after this match, Liverpool won’t play the return fixture of this match in Southampton until the very last day of the season. More on that in part 3 of this schedule breakdown…

So, hopefully, by Boxing Day, England will have recovered from winning the 2022 World Cup and it will be ready for a huge match to start the Premier League back up. Liverpool visit good old Steven Gerrard and Aston Villa to get their season going after the World Cup break.

Both teams are two of the absolute titans of English football and this will be a must-see match. The EPL schedule makers knew what they were doing with this one, and it will be the biggest game on arguably the biggest day on the domestic football calendar.

It will be interesting to see what kind of team Jürgen Klopp fields in this match. This will certainly be determined by how deep teams like England, Brazil, Egypt, and now Uruguay, go in the World Cup. Players like Jordan Henderson, Trent Alexander-Arnold, Alison, Roberto Firmino, Mo Salah, and Darwin Núñez will all be in contention to represent those clubs.

Villa at Villa Park is always a big match and Stevie G will be keen to show out versus the club where he is still beloved. The Reds did beat Villa both times they played in the Premier League last year but both matches were close. This match isn’t a traditional derby or even one of Liverpool’s fiercest rivals. But on Boxing Day, it will feel like both of those things.

This isn’t the first match for Liverpool in the Premier League for the calendar year 2023 but, it will be the biggest one to that point. It won’t be the first match against Chelsea either. The Reds will have already played the Blues at Anfield back in September.

Who knows what will have transpired in that match but, this match, similar to a match with Manchester City, is against one of the only other teams in realistic contention for the Premier League title. Chelsea are in a massive state of flux after their forced sale at the end of last year. However, they are still in that very top tier of EPL teams.

We will very much know what Liverpool are capable of by this point in the schedule. Chelsea and Liverpool drew both of their meetings in 2021/22. A 1-1 affair at Anfield in August of 2021 and a 2-2 meeting at the Bridge in the first match of the calendar year 2022 in January.

Like the City matches, one has to wonder if the Reds had been able to win just one of those matches against the Blues, could it have been enough to lift the Premier League trophy? Some of these draws against the elite teams must start turning into wins if they want to win it all.

Look, it’s the Merseyside Derby, again! In the beginning part of our look at the schedule, we had Everton and the Merseyside Derby as one of the biggest matches of the season. The second meeting is no less important in the hearts and minds of anyone from Liverpool or supporters of either side.

In fact, for the Reds, it means more because it’s the lone home match in the season of a rivalry that goes back to 1894. You could say that these derby matches mean more to anyone from the city of Liverpool than any other match on the calendar.

Liverpool vs. Everton is one of the biggest rivalries in English football, but it is also one of the most hyped matches in the North American market. Specifically in the United States, where there is huge Liverpool support and because of the number of American players that have played for Everton over the years.

The folks over at NBC have turned the Merseyside Derby into two of the biggest games of the season on the American soccer calendar. That should be a feather in the cap of both clubs.

The End of the Middle, Is the Beginning of The End

By February of 2023, the world might be a very different place. But one thing is all but certain, Liverpool will be in the hunt for trophies. At this point in the schedule the League Cup will be winding down and the FA Cup gearing up.

Hopefully, Liverpool will also be making noise in the Champions League again. Going deep in those competitions, along with maintaining Premier League excellence will be a challenge for everyone at the club.

Mathematically, you could argue that we aren’t quite at the 2/3rd point of the season yet. You’d be right but, the second Merseyside Derby feels like a natural point to stop for now.

Definitively, we’ve looked at the middle of the 2022/23 season. It will be dominated by huge matches and the World Cup break. Look for more coverage of that, and the effect that it will have on the Premier League and Liverpool, in the coming months. And also look for Part 3: The End, coming later this week.