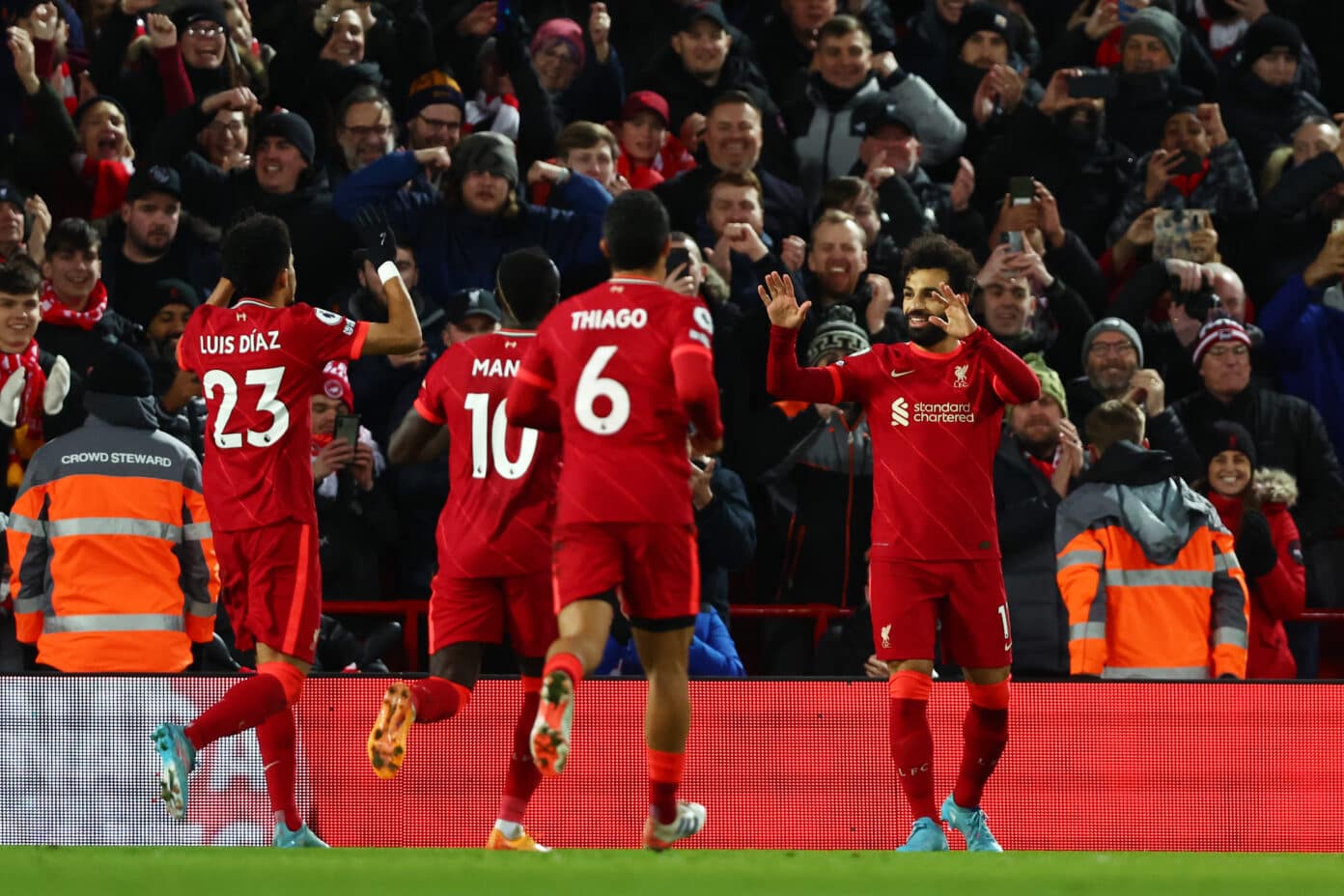 Liverpool thrashed Leeds United 6-0 at Anfield on Wednesday as they halved their deficit to Premier League leaders Man City to just three points.

Two penalties from Mohamed Salah, either side of Joel Matip's first goal of the season, gave the Reds a commanding 3-0 lead at the break.

The visitors managed to stem the flow in the second half but Sadio Mane netted twice inside the final ten minutes before Virgil van Dijk scored in injury time to secure a 6-0 victory.

All focus now turns to Sunday's Carabao Cup final against Chelsea, with the Reds in search of their first piece of silverware since winning the Premier League title in 2020. 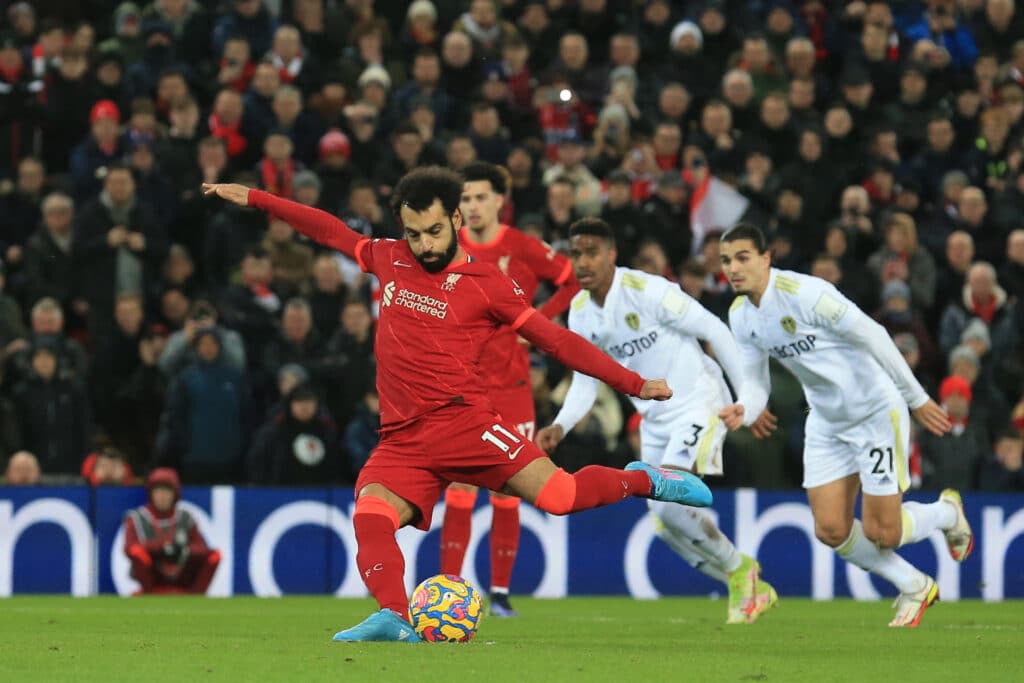 Klopp made five changes to the side that beat Norwich City 3-1 at the weekend as Trent Alexander-Arnold and Andy Robertson returned to the backline and a Fabinho, Thiago and Curtis Jones started in midfield.

Luis Diaz's goalbound effort was inadvertently blocked by Sadio Mane, who was playing through the middle, after the Colombian had freed himself down the left and initially looked destined to hit the top corner with a sharp strike.

Alisson was caught out by Daniel James' challenge as he looked to play out from the back, but Joel Matip got back to cover and clear the ball to safety before James could take advantage of the Brazilian's error.

Liverpool were awarded a penalty for a handball after Robertson's cross hit Stuart Dallas' arm, with Mohamed Salah stepping up to the spot and sending goalkeeper Illan Meslier the wrong way as he made it 1-0 to the Reds inside the opening fifteen minutes.

Diaz beat Luke Ayling down the left and raced into the box before firing towards the far corner, but his effort wasn't set out far enough as Meslier made a comfortable save at his near post. 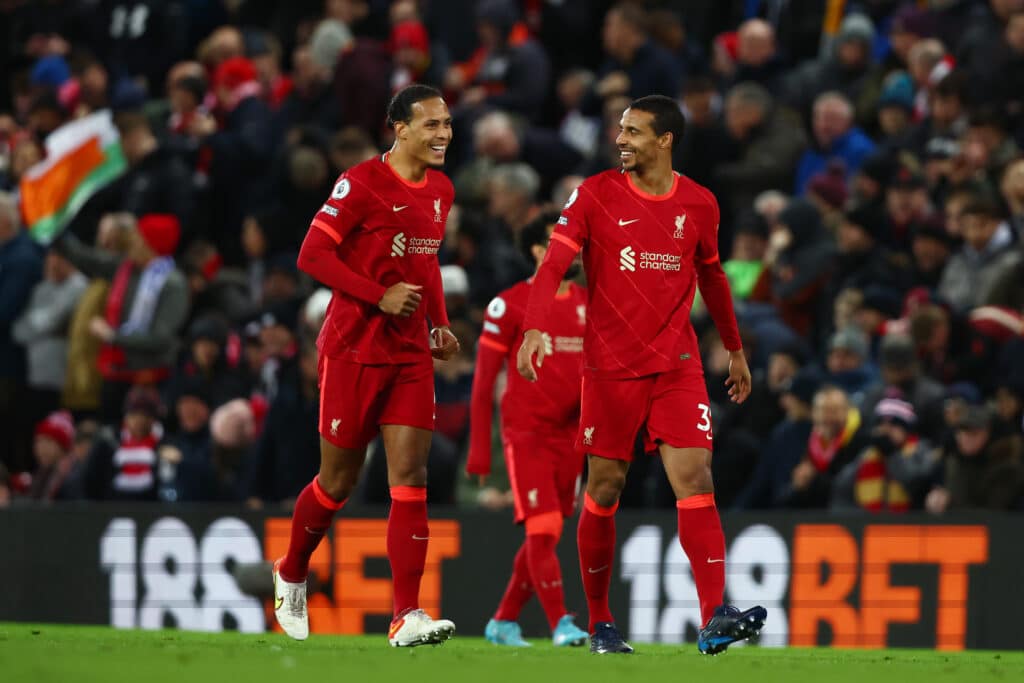 The visitors had the ball in the back of the net as Raphinha rounded off Jack Harrison's cross after Matip was initially caught out of position, but the linesman rightly flagged for offside.

The Reds doubled their advantage with an unlikely goalscorer getting in on the act as Matip strode forward from the back and combined with Salah before expertly turning the ball home to make it 2-0 with a composed finish.

Liverpool were awarded a second penalty in the game just minutes later and Salah stepped up again to produce the same result, with Salah finding the top corner and leaving Meslier with no chance to put the Reds in total control.

The Egyptian nearly bagged a first-half hat-trick as he beat the offside trap and lifted the ball over Meslier, but Junior Firpo was one of two defenders who got back in time before clearing off the line.

Leeds carried a threat in the second half but the final ball often let them down, with Raphinha nearly getting in behind early on before Virgil van Dijk got back to thwart the Brazilian. 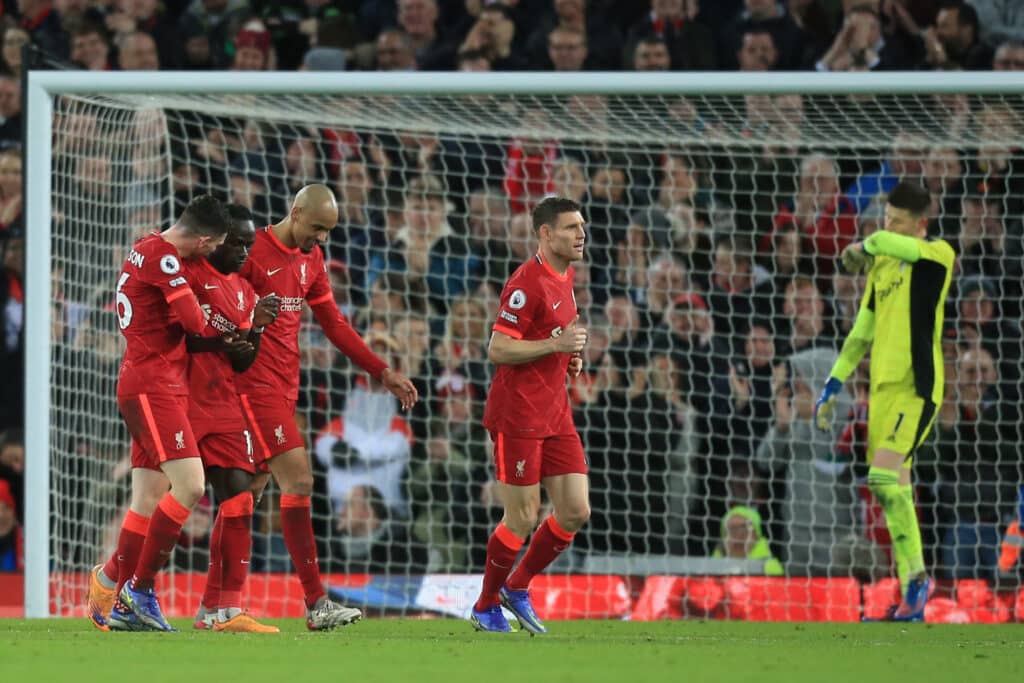 Salah continued to strive for a hat-trick goal as he combined with Alexander-Arnold before coming inside and curling a strike towards the top corner, but Meslier was up to the task as he kept the Reds forward out.

Jones found himself through on goal but opted to square the ball when shooting himself may have been the better option, with Salah skying his effort and squandering a glorious opportunity to make it four.

With one eye on Sunday's Carabao Cup final, Jordan Henderson came on to replace Thiago with a little over 20 minutes left on the clock - with the skipper immediately looking to get on the ball and re-take the initiative in midfield.

Jones then made way for former Leeds man James Milner before the Reds made it four through Mane after good work from Salah and Henderson saw the latter square the ball for the unmarked Senegal international, who made no mistake with his close-range finish.

Mane added another late on after the ball fell to him inside the box following good work from Divock Origi before Virgil van Dijk nodded home from Andy Robertson's cross in injury time to seal an emphatic 6-0 win.