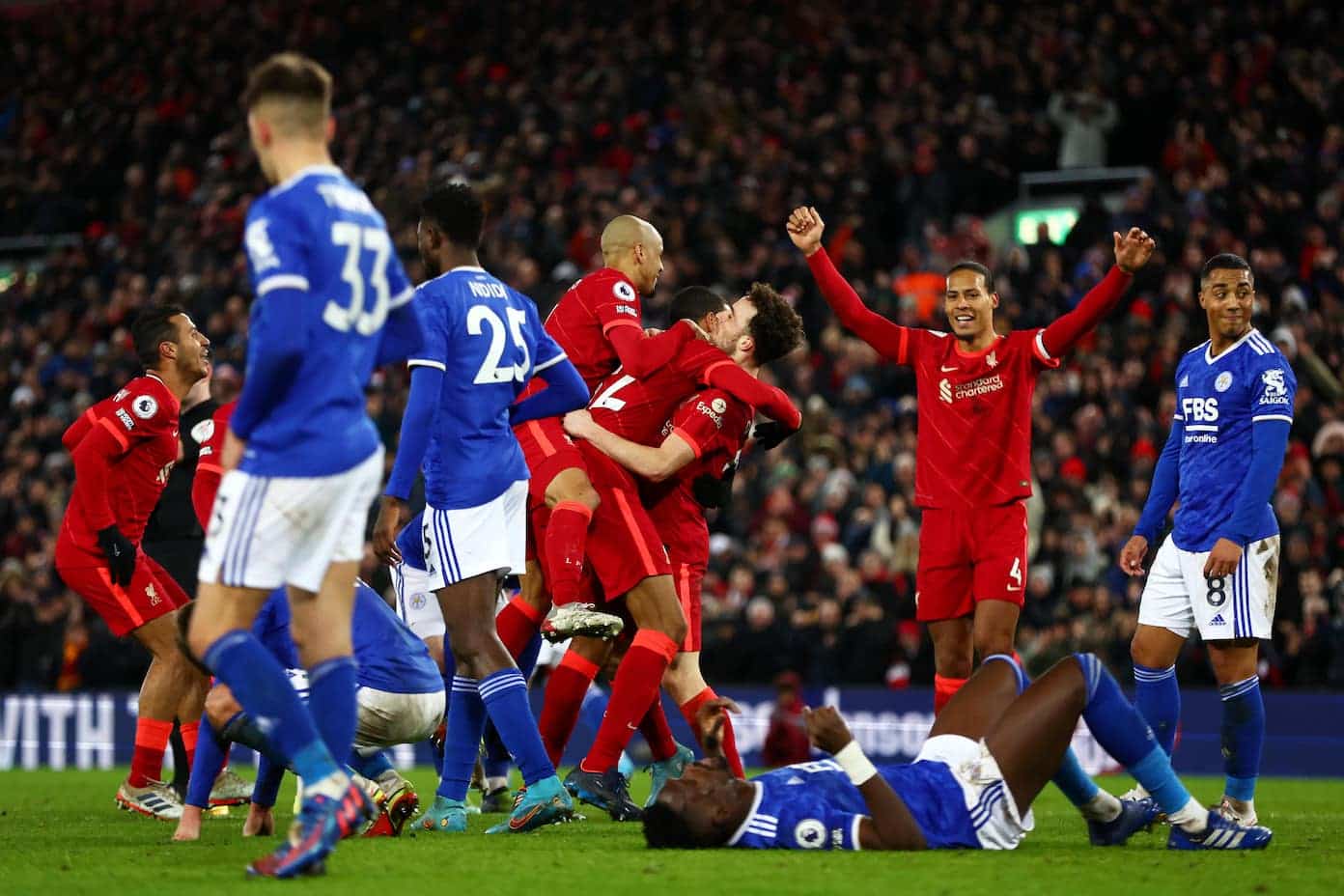 Liverpool beat Leicester City 2-0 thanks to a brace from Diogo Jota on a successful night for the Reds that saw Luis Diaz make his full debut and Mohamed Salah return from international duty.

Jota's first-half strike was the difference between the two sides at the break, with the Reds forward on hand to turn in from close-range following a Liverpool corner.

The Reds were impressive in the second half but it took until the final five minutes for them to put the game beyond the visitors, with Jota netting his second of the game and 17th of the season so far to seal a 2-0 win.

The result means Liverpool now sit 9 points behind league-leaders Manchester City, with a game in hand, with all focus now turning to this weekend's clash against Burnley at Turf Moor. 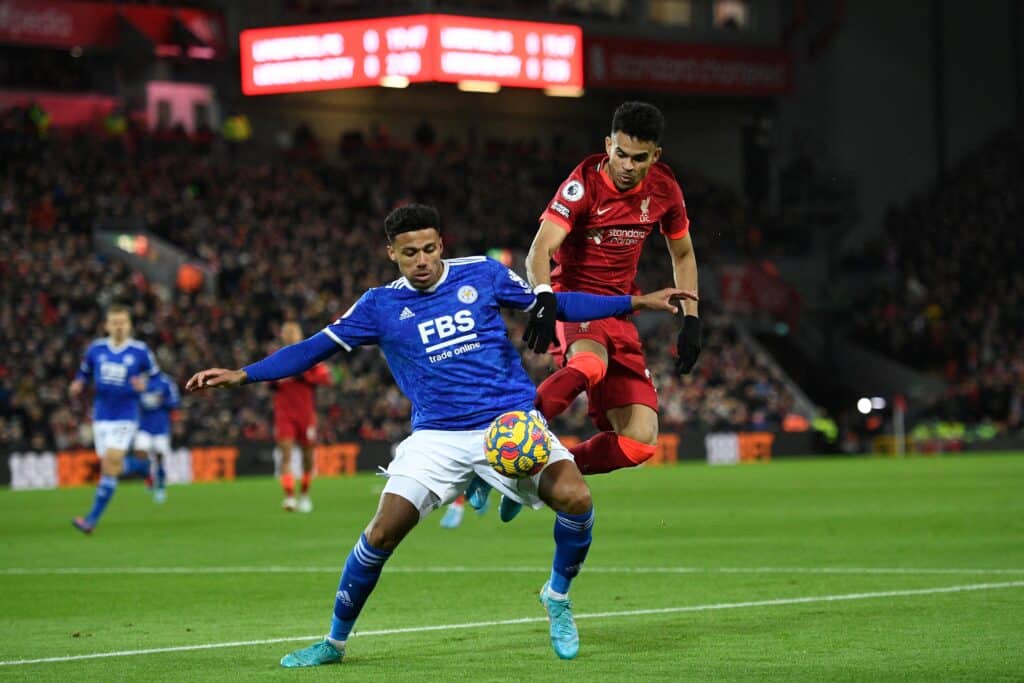 Luis Diaz made his first start in a Reds shirt, whilst Alisson, Joel Matip, Andy Robertson and Thiago also returned to the starting eleven. Mohamed Salah was named on the bench alongside youngster Harvey Elliott.

Diaz nearly snuck in behind the Foxes’ defence inside the opening 20 seconds after being found by an excellent Trent Alexander-Arnold pass, but the Colombian was thwarted by defender Daniel Amartey as he looked to cut inside.

Leicester had a couple of early encouraging signs as Patson Daka and James Maddison broke into the box, but the Reds were alert to the danger as they kept the duo at bay.

A sharp turn by Alexander-Arnold from the edge of the box saw him cut inside onto his left foot and get a powerful strike off at goal, but goalkeeper Kasper Schmeichel was behind it the whole way as he palmed the ball behind.

Liverpool made the breakthrough in the 34th minute as Virgil van Dijk’s powerful header from a corner was parried by Schmeichel, with Diogo Jota pouncing on the ball and slotting home to notch his 16th goal of the season. Thiago had an acrobatic effort at goal from the edge of the area but the ball went wide, with the Reds looking lively in attack in the final ten minutes of the first half, only for the Foxes to hold strong.

Liverpool failed to come out in the second half with the same attacking vigour, whilst Leicester continued to make things difficult as they kept their shape and countered effectively via the likes of Maddison.

Diaz and Andy Robertson combined down the left before the latter flashed a driven cross towards Roberto Firmino at the near post, but the Brazilian was unable to connect with the ball.

Van Dijk was a constant menace from set-pieces for the Foxes and the Dutchman's knockdown towards Jota from a corner was nearly turned home by the Portuguese forward, but the ball failed to hit the target.

Firmino and Curtis Jones made way for Mohamed Salah and Harvey Elliott with a little over 30 minutes left on the clock, whilst Brendan Rodgers responded with the introduction of Youri Tielemans and Kelechi Iheanacho. 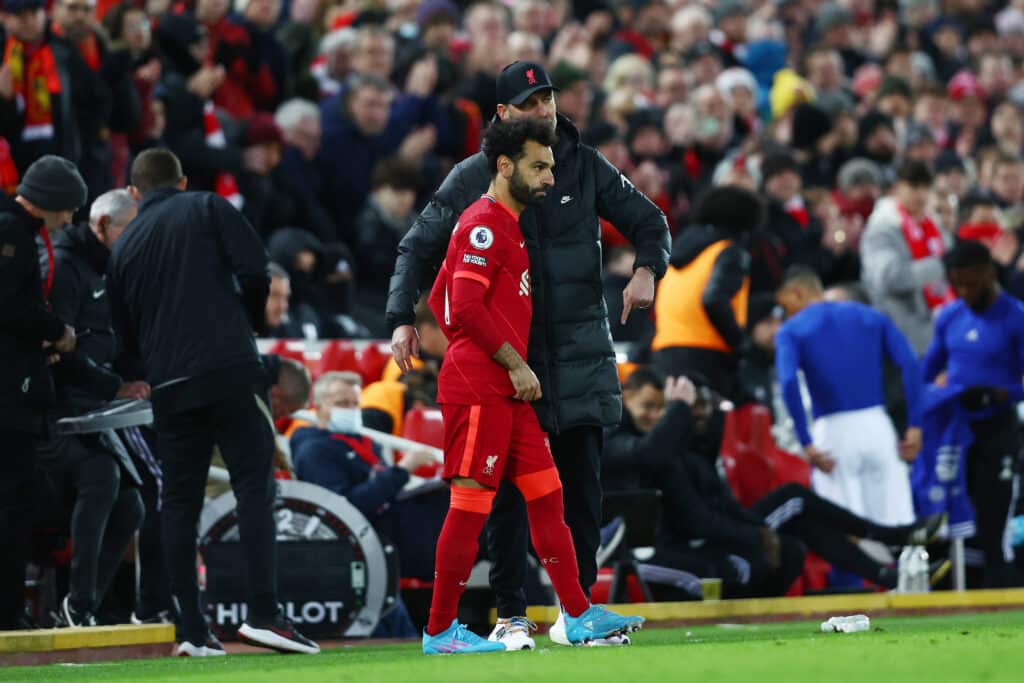 A quick Reds attack saw Jota feed the ball through to Diaz on the left, with the winger bursting into the box and getting a left-footed strike off, but the effort failed to trouble Schmeichel in goal.

Salah, who was desperate to get back to scoring ways on his return from AFCON duty, was denied twice in quick succession by Schmeichel before hitting the post with a curling effort that seemed destined for the top corner.

Diaz was also kept out by Schmeichel after cutting across the ball with power from outside the box, with the Reds looking increasingly likely to add a second goal in the latter stages.

The Colombian nearly netted after combining with Salah and latching onto his reverse ball, but Schmeichel was once again up to the task as he got his foot to the ball.

The Reds finally sealed the deal as Jota bagged his second of the game after finishing powerfully from just inside the box from Joel Matip's pass, with the Reds now turning all attention this weekend's clash against Burnley at Turf Moor.