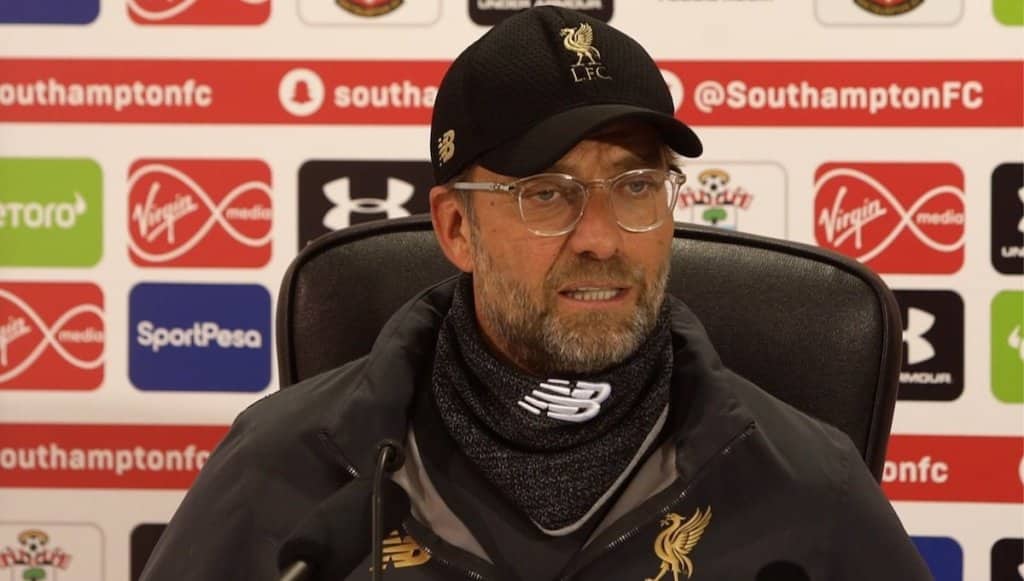 Jurgen Klopp spoke to reporters at St. Mary's after Liverpool defeated Southampton 3-1 on Friday night after a tense 90 minutes.

The Reds went a goal down in the opening ten minutes after Shane Long put the visitors ahead with a simple finish.

Naby Keita levelled the scores ahead of the break, however the game appeared to be heading for a draw with the Reds unable to unlock Saints' defence once more.

With just ten minutes to go, Mohamed Salah received the ball in his own half before starting a one-man counter and heading towards Southampton's penalty area.

The Egyptian slotted home with a precise finish from outside the box to put Liverpool ahead and score his 50th Premier League goal for the Reds.

Substitute Jordan Henderson made a huge impact on the game and his determination was rewarded in the final five minutes as he capped off the win with Liverpool's third.

Speaking after the game, Klopp insisted he was incredibly proud of his players, whilst praising Henderson for his performance further up the field.

"We spoke about that, he played there for England and looked really good. But he’s played incredible games for us as a No.6; we have other players who can play that position," he said.

"How all midfielders are, they have to offer me things and then I make the line-up. How we did it today was fantastic.

"It was his first game for a while on that position and scoring a goal is a nice sign, absolutely."

The manager highlighted the Reds' mentality to persevere and lauded his side to come up with the goods in the second-half.

"The two goals we scored were simply world-class," he said. "Asuper goal from Mo, a super run, Bobby was so important to make the run – he couldn’t play it because the angle was not good but it was still important.

"A fantastic finish. And then Bobby again chasing the whole world pretty much, wins the ball, wins the one-on-one situation, super pass, 3-1.

"It was of course close, but that was clear from the first second, I would say. Everybody who comes here in the future will feel that. It makes it even more satisfying and brilliant that we could win it – it’s really big for us."

Liverpool are now back to the top of the Premier League table with 82 points, although they have played a game more than Manchester City, who are two points behind.