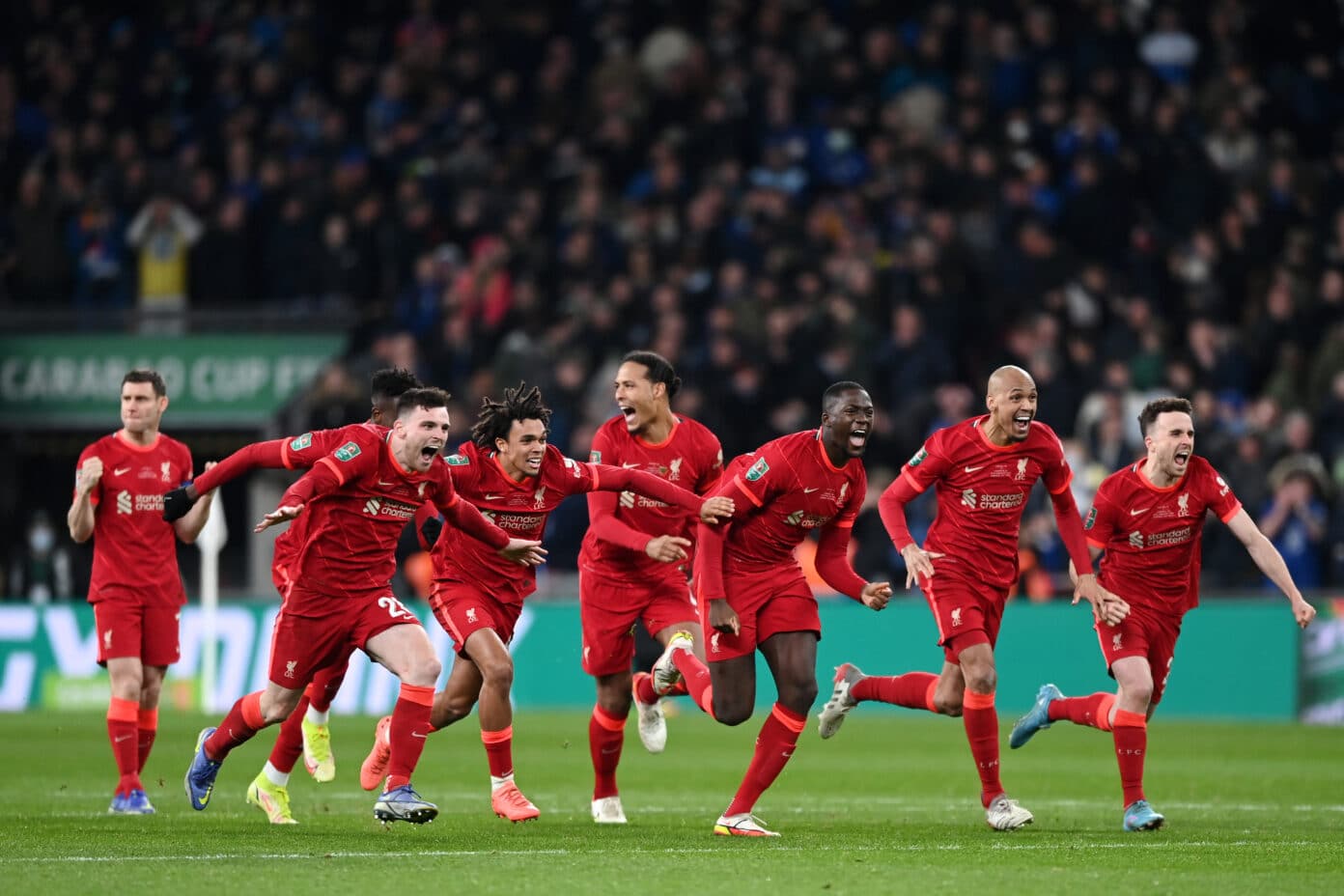 Liverpool beat Chelsea 11-10 on penalties to become Carabao Cup winners for a record ninth time, with Jurgen Klopp delivering his first piece of domestic cup silverware - and his fifth overall.

The Reds made a slow start to the encounter and could have gone behind only for a sharp Caoimhin Kelleher save, but they began to dominate as the half wore on, with Edouard Mendy making a double-save to keep Sadio Mane out as the two sides went into the break on level terms.

Both sides had goals ruled out in the second half, with Joel Matip and Kai Havertz seeing efforts chalked off for offside in the build-up. It finished goalless after 90 minutes as the two sides went into extra-time, with both Romelu Lukaku and Havertz again seeing efforts ruled out for offside.

The scoreline remained goalless after the additional period as the game went to penalties, with the Reds coming out on top 11-10 after a dramatic shootout that saw Kelleher score and substitute Kepa Arrizabalaga blaze over the crossbar in sudden death. 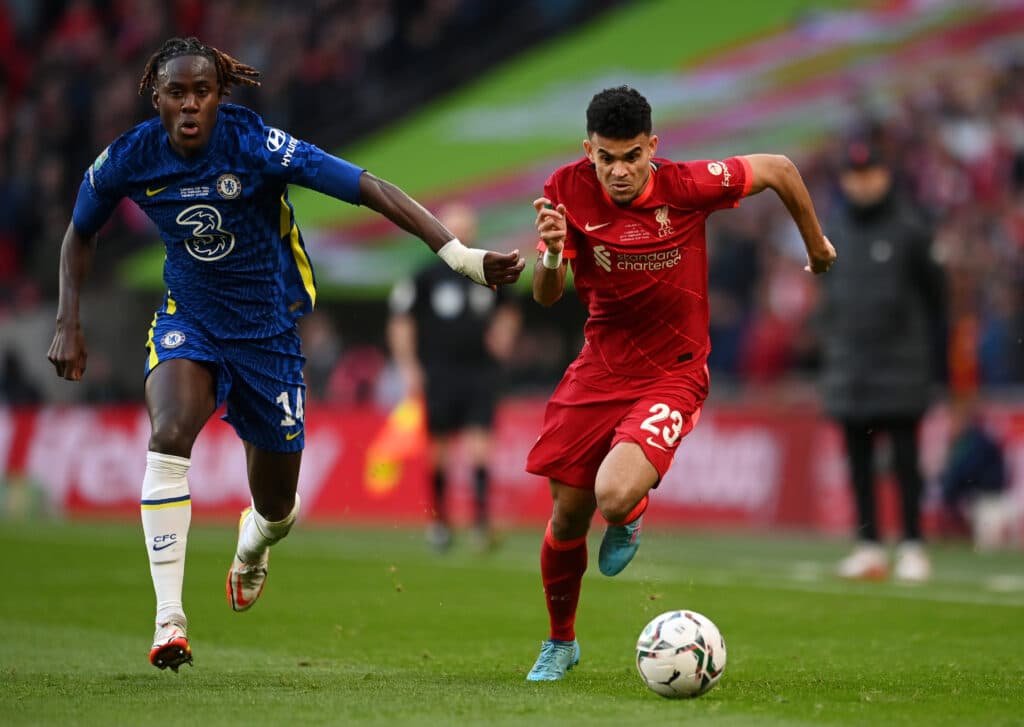 Klopp made two changes from midweek's 6-0 rout of Leeds, with Kelleher resuming League Cup duty between the sticks and Thiago replacing Curtis Jones in midfield. However, the Spaniard pulled up during the warm-up as Naby Keita came into the starting eleven on short notice.

Kelleher made a crucial save in the early stages as Christian Pulisic looked nailed on to tuck the ball into the back of the net from Cesar Azpilicueta's cross, but the Reds goalkeeper anticipated the shot and palmed the ball away.

Chelsea looked sharper of the two sides as Liverpool struggled to keep the ball, with Thomas Tuchel's side looking to push up high and get on the ball themselves in search of an early opener, with Kai Havertz proving to be a nuisance for the Reds defence.

Luis Diaz and Mane both isolated Trevoh Chalobah down the left on separate occasions but Chelsea's defence quickly nullified the threat, although Liverpool's best route to goal still appeared to be down that side.

Mason Mount was unable to squeeze his effort through Matip's legs after Havertz had found him inside the box with space, whilst Mane soon evaded the Blues defence and connected with a pinpoint Trent Alexander-Arnold ball into the box, but his header went way off target. 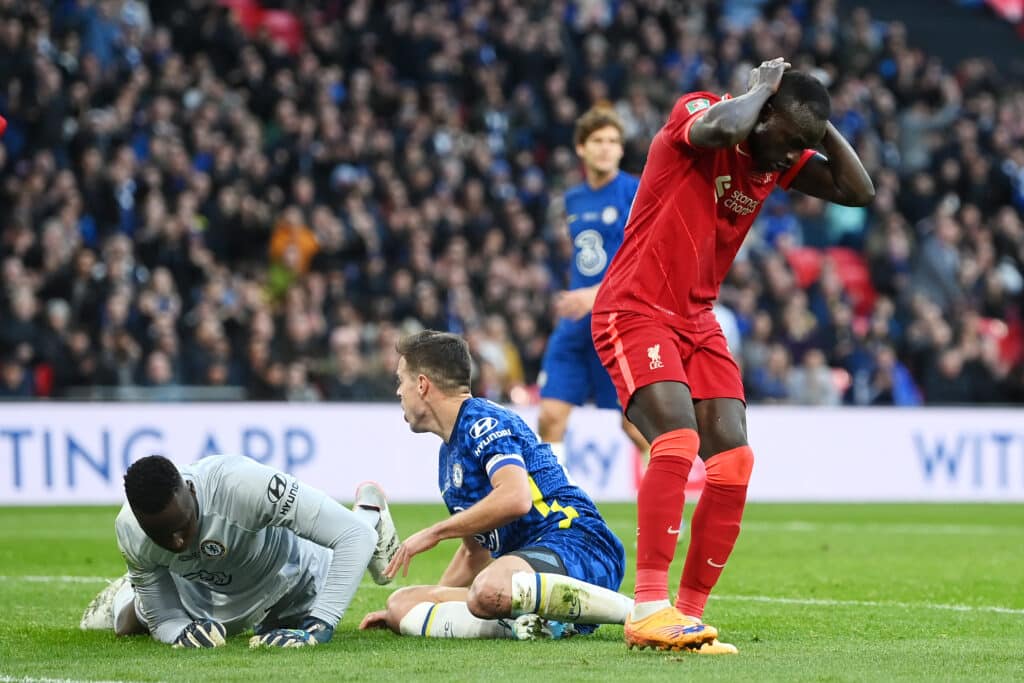 Liverpool began to come out on top as the half wore on as they put Chelsea under sustained pressure, with Diaz, Mane and Mohamed Salah having an increasing level of say in proceedings.

A powerful Keita strike from the edge of the box was palmed by Mendy into the path of Mane, who was favourite to turn the ball home on the follow-up, but his close-range effort was miraculously kept out by Mendy to keep the score level.

A quick break by Chelsea on the stroke of half-time saw Havertz find Mount's run into the box, but the midfielder was unable to hit the target with his side-footed finish as the Reds breathed a sigh of relief before the break.

Chelsea started the second half brightly as Havertz flashed a dangerous ball across the face of the goal before Mount snuck in behind and left Kelleher grounded before hitting the base of the post from 15 yards out in a real let-off for the Reds.

Havertz and Mount linked up before the latter got a powerful low strike on target, but Kelleher collected the ball well and avoided spilling it into danger to keep the score goalless. 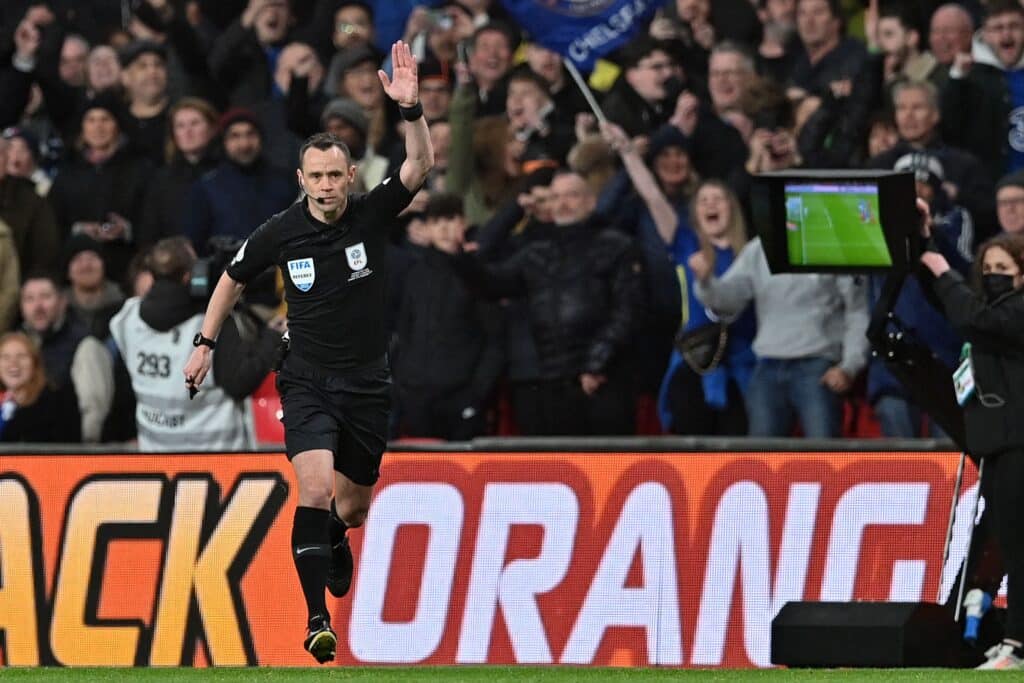 Salah was denied from Thiago Silva's goalline clearance after beating the offside trap and dinking the ball over Mendy, although the Egyptian's effort was likely fading away from goal regardless.

Liverpool broke the deadlock with 25 minutes left on the clock as a well-worked Alexander-Arnold set-piece was headed back across goal by Mane before Matip headed the ball into the roof of the net to make it 1-0.

But the goal was disallowed by Stuart Attwell after VAR's recommendation for the referee to determine whether van Dijk was interfering in play from a supposed offside position, much to the dismay of those in the red half of Wembley.

Excellent setup play by Diaz gave Keita the opportunity to turn the ball home from close range, but Mendy smothered the Guinean's effort as the ball ricocheted over the crossbar and behind.

Diaz was a livewire down the left and he paced into the Chelsea box and got a low strike off at goal, only for Mendy to be alive to the danger once again and keeping the ball out with his legs. 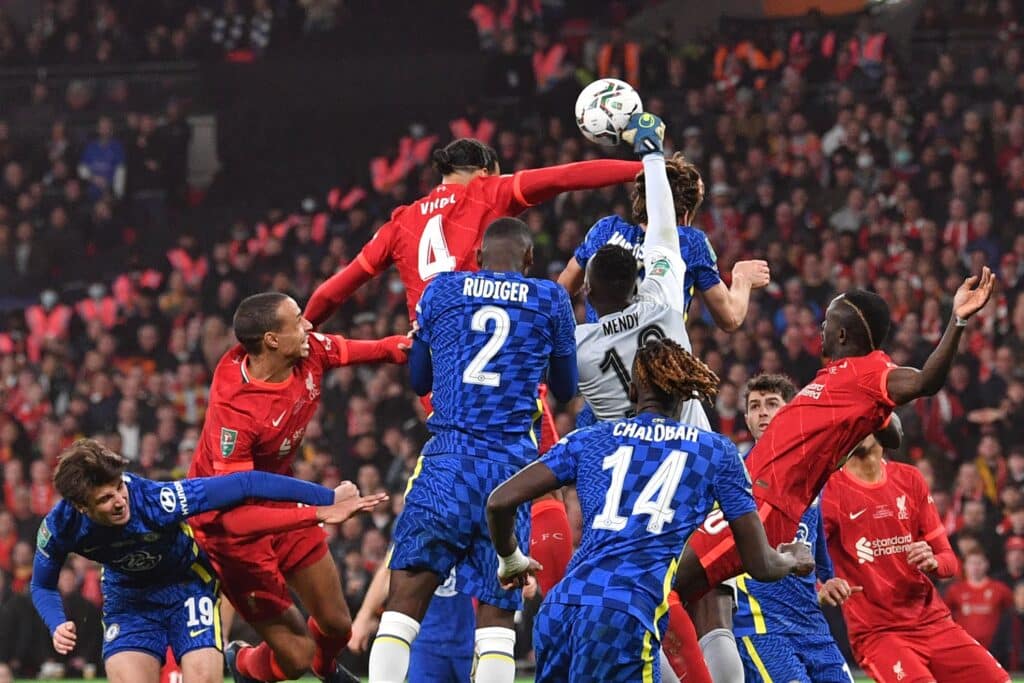 Havertz thought he had put Chelsea ahead after substitute Timo Werner had found the German forward at the far post, with Kelleher unable to keep the ball out despite getting a hand to the ball, but the linesman rightly flagged for offside.

The Reds made a triple substitution with a little over ten minutes left on the clock, with Harvey Elliott, James Milner and Diogo Jota coming on to replace Henderson, Keita and Mane.

A scramble from a corner saw Diaz's effort blocked before the ball was nearly forced in by Matip, but it eventually came to Andy Robertson, who was unable to get enough purchase on his strike as Chelsea cleared their lines.

Alexander-Arnold's out-swinging corner was met by a brilliant van Dijk run and header, but Mendy got a strong hand on the ball to deny the Dutchman's header aimed towards the bottom corner.

Liverpool were largely static as Marcos Alonso squeezed a cross in from the byline for substitute Lukaku, who redirected the ball towards goal, only for Kelleher to make an instinctive low save to keep the game at 0-0 and into extra time.

Ibrahima Konate came on to replace Joel Matip at the start of the additional period as Klopp looked for a new dynamic in his defence in response to the introduction of Werner and Lukaku. However, Chelsea had the better of proceedings in the early stages.

Werner cut inside and fired over the crossbar from the left before Lukaku found the back of the net after being played through on goal, only for both the linesman and VAR to rule the goal out for offside. 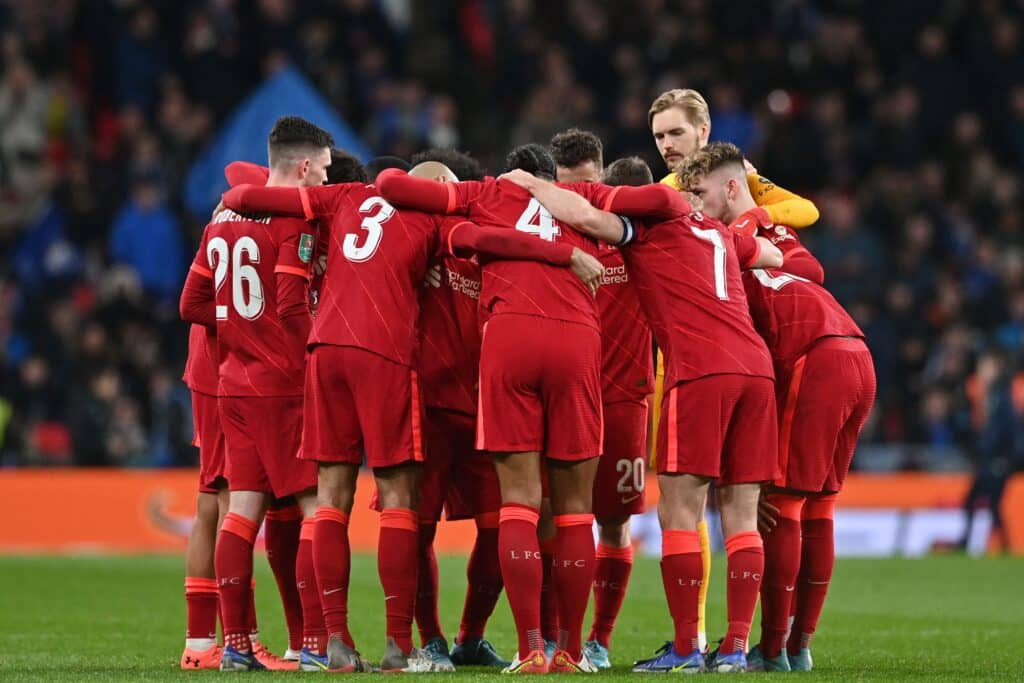 Diaz, who was Liverpool's standout player down the left, was withdrawn minutes after seemingly pulling up with a hamstring issue, with Divock Origi coming on to replace the Colombian.

Chelsea thought they'd notched the breakthrough again in extra time when Havertz got in behind and finished expertly past Kelleher in goal, only for the linesman to raise his flag for the fourth time to disallow the goal for offside.

It was end-to-end on occasion in the latter stages as Salah and then Lukaku both looked to break free and make a difference, but the defences of either side did just enough to smother the danger as the final went all the way to penalties, with Kepa Arrizabalaga coming on for the London side.

Milner, Fabinho, Van Dijk, Alexander-Arnold and Salah were exemplary from the spot, whilst Chelsea were equally flawless through Alonso, Lukaku, Havertz, Reece James and Jorginho, with the shootout going to sudden death.

Jota, Origi, Robertson, Elliott, Konate all slotted home before Rudiger, Kante, Werner, Silva, Chalobah did the same for Chelsea, leaving the goalkeepers to battle it out.

Kelleher stepped up to the mark and made no mistake with his finish before Kepa smashed his effort over the crossbar to hand Liverpool a remarkable late victory on penalties, with the Reds lifting their first domestic cup trophy since 2012.