Liverpool remain hot on the heels of league-leaders Man City as they beat Brighton and Hove Albion 2-0 thanks to goals from Luis Diaz and Mohamed Salah.

Brighton made a strong start to proceedings but Liverpool went into the break 1-0 up as Luis Diaz beat goalkeeper Robert Sanchez to Joel Matip's lofted pass to head the ball home, with Sanchez fortunate not to be sent off for dangerous play in his attempt to thwart the Colombian's first Premier League goal.

Liverpool remained on top despite moments of encouragement for the hosts and they doubled their advantage from the penalty spot through Mohamed Salah, who netted his 20th Premier League goal of the season before being withdrawn due to a suspected ankle injury.

The Reds were far from their best but they got the job done to clinch another three points on the road, with all focus now turning to midweek's trip to the Emirates as they take on Arsenal in another must-win clash. 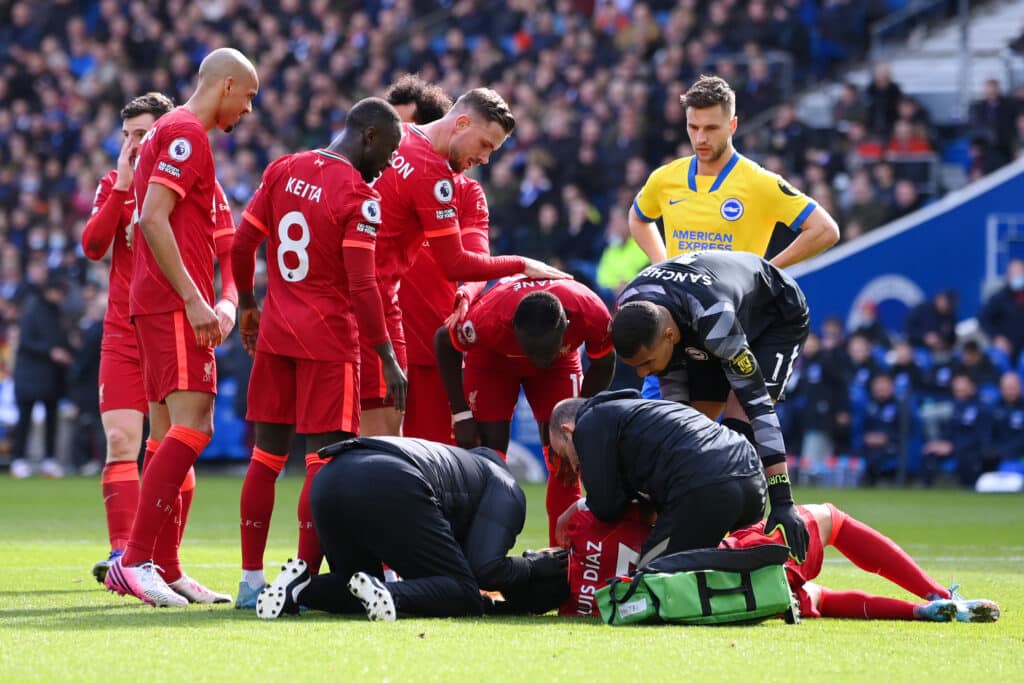 Jurgen Klopp made three changes to the side from midweek as skipper Jordan Henderson, Naby Keita and Luis Diaz returned to the starting eleven. Roberto Firmino returned from injury to start from the bench, alongside Thiago and Diogo Jota.

The Reds were stretched in the early stages as the hosts started with real attacking vigour by pushing up high and looking to impose their game on Liverpool, with Neal Maupay going inches wide of the woodwork inside the opening five minutes.

Liverpool began to settle as the half wore on and they took the lead through Diaz, who beat the offside trap and latched on to Joel Matip’s exquisite lofted ball to head the ball past onrushing goalkeeper Robert Sanchez and into the back of the net, with the Colombian avoiding serious injury after colliding with Sanchez in the process.

The Reds began to dominate proceedings following the opener, with Brighton struggling to find the same gaps they did in the early stages and Liverpool controlling the ball through the likes of Fabinho, Henderson and Keita.

Mane called Sanchez into action in quick succession after first meeting Trent Alexander-Arnold's cross and later beating Joel Veltman before striking at goal, but it was comfortable for the Brighton shot-stopper on both occasions. 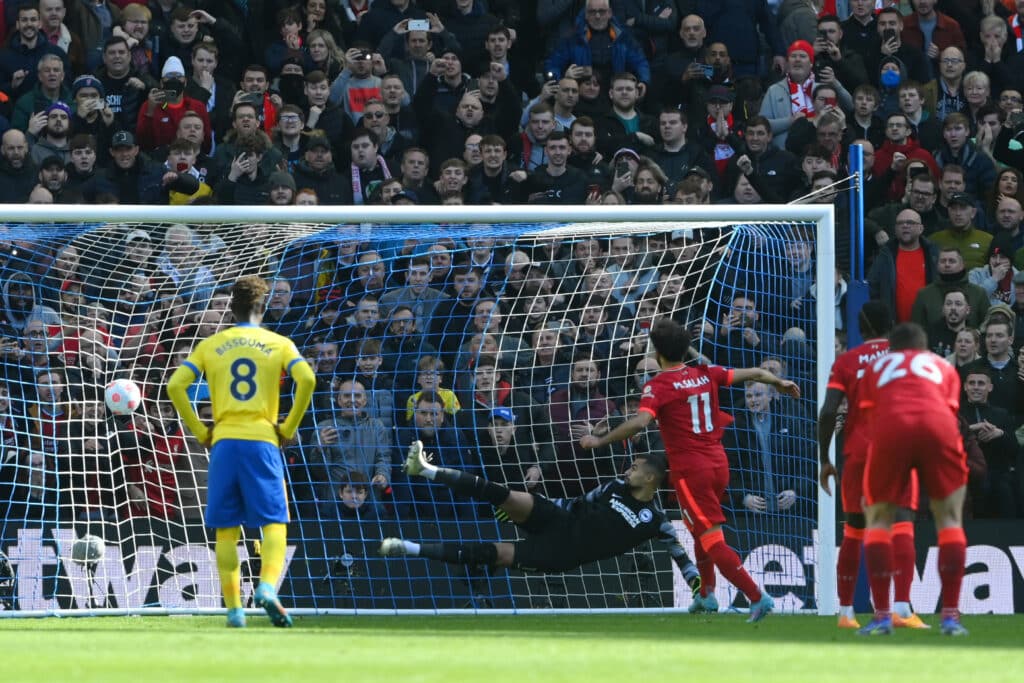 A well-worked move saw Alexander-Arnold combine with Mane before the right-back played a first-time ball in towards Mohamed Salah, who could only flick the ball on for Sanchez to collect despite having time to bring the ball down and turn.

Salah hit the crossbar on the second attempt after creating space inside the box, with his curling effort towards the far post taking a deflection and agonisingly looping onto the woodwork after leaving the goalkeeper with no chance.

An excellent run and set-up by Diaz saw him square the ball for Salah at the edge of the box, but the Egyptian dragged his shot wide of the near post in a real let-off for the hosts.

But a Keita strike from just inside the box was blocked by the outstretched arm of Yves Bissouma, with the referee duly pointing towards the penalty spot before Salah stepped up to make no mistake as he hammered the ball down the middle to double Liverpool's advantage.

But the Reds' goalscorer pulled up with an ankle issue just after the hour mark before he was withdrawn for Diogo Jota, with Thiago also coming on in place Keita, who took his place on the substitutes bench with an ice pack firmly on his head after a coming together minutes earlier. 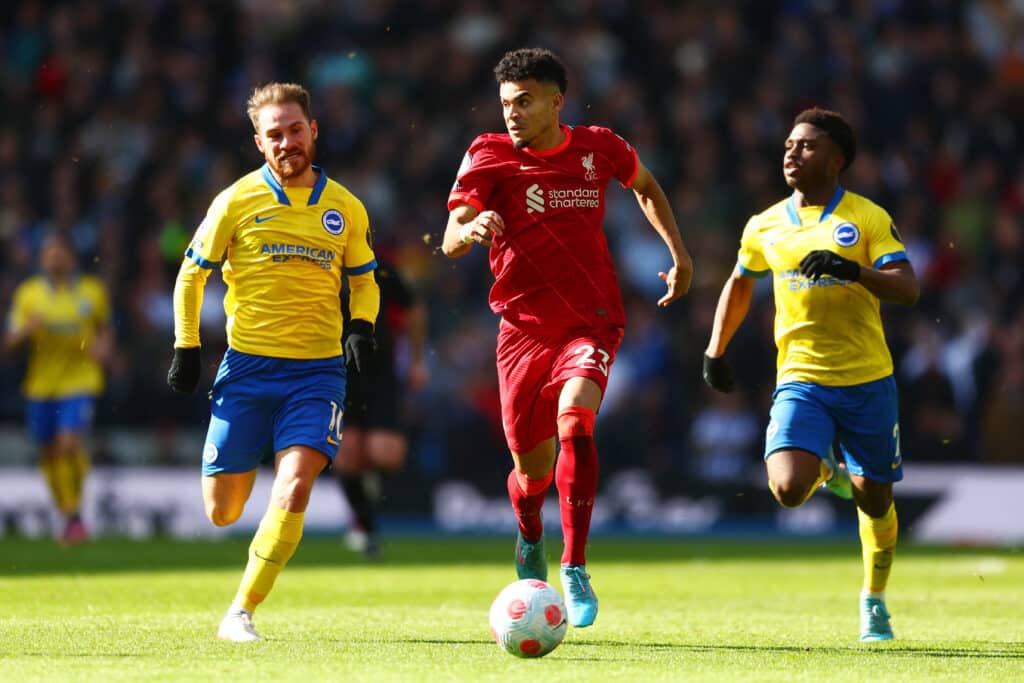 Alisson was barely called into action for much of the game but the Brazilian made a crucial intervention to tip substitute Danny Welbeck's header over the crossbar and keep the Reds' two-goal advantage.

A quick counter-attack from the resulting corner saw Diaz break free down the left and home in on goal, but Sanchez got down well to smother his effort, much to the frustration of the Reds boss on the sidelines.

Alisson made another important save to deny Solly March before Diaz did well to beat Tariq Lamptey and motor into the box, but his squared ball in search of Jota was intercepted well and put behind.

It ultimately finished 2-0 to the Reds, who now sit three points below league-leaders Manchester City before their trip to the Emirates to face Arsenal on Wednesday night.