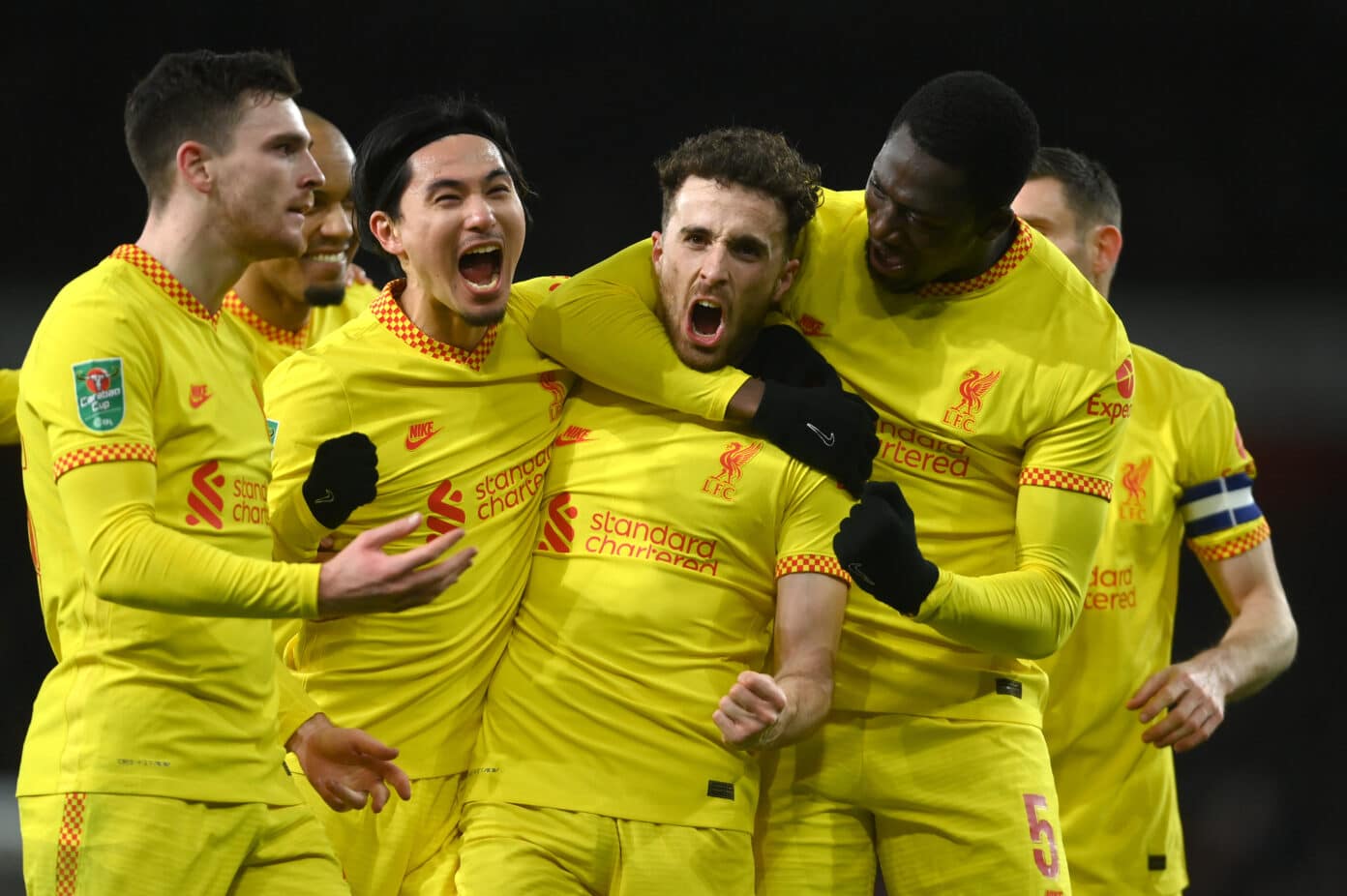 Liverpool will meet Chelsea in the Carabao Cup final after a Diogo Jota brace saw the Reds beat Arsenal 2-0 at the Emirates in the semi-final second leg on Thursday night.

It was somewhat of a slow start for Liverpool but they weathered the storm and went into the break 1-0 up after Jota's excellent solo run and finish midway through the first half.

The Reds continued to impress in the second half as they dominated proceedings and they took full control of the tie late on as Jota netted his second of the game with a dinked finish to make it 2-0.

Substitute Thomas Partey was sent off for two yellows as the Reds cruised in the final minutes and set up a Carabao Cup final meeting against Chelsea at Wembley on 27 February. 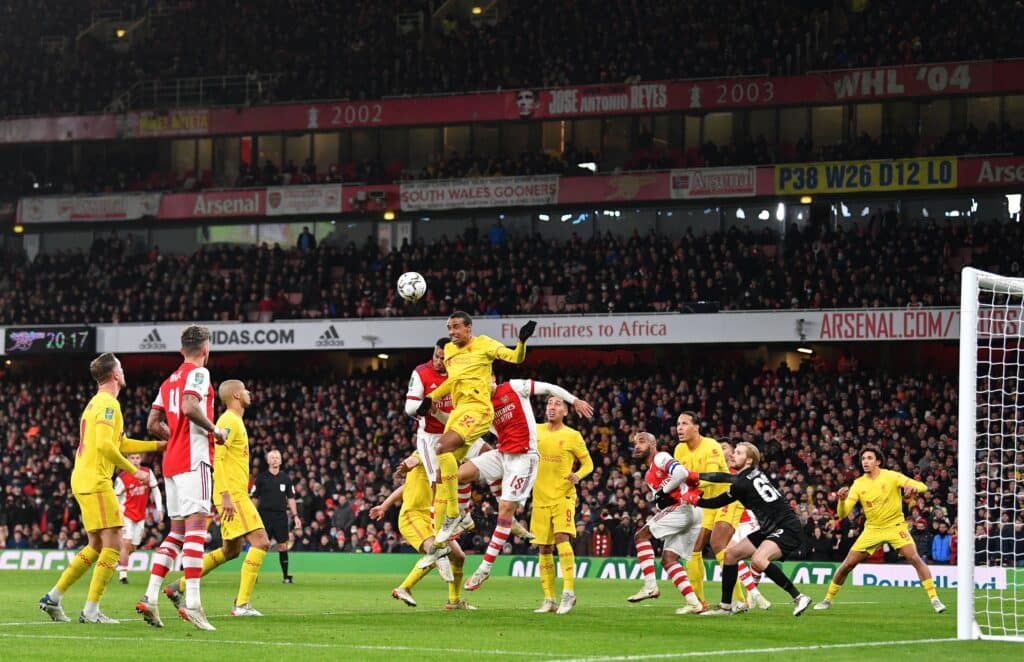 Jurgen Klopp made two changes to the side that beat Brentford at the weekend as Caoimhin Kelleher and Kaide Gordon replaced Alisson and the injured Alex Oxlade-Chamberlain in the starting eleven.

The hosts made a positive start to the game as they pressed high and put the Reds defence under the cosh, with an Alexandre Lacazette free-kick inside the opening five minutes seeing Kelleher tip the ball onto the crossbar.

The Reds began to play themselves into the game and they had the ball into the back of the net following an Andy Robertson corner which was nodded down by Fabinho, with Joel Matip getting on the end of the knockdown and turning home, but the linesman correctly raised his flag for offside.

Good work between Roberto Firmino and Trent Alexander-Arnold saw the latter release Diogo Jota down the left, with the Portuguese cutting inside and driving towards the Arsenal box before finding the bottom corner to put the Reds in the driving seat.

Chances were far and few between both sides thereafter, with much of the game being played without a rhythm in the middle of the park as both teams struggled to find the crucial final pass. 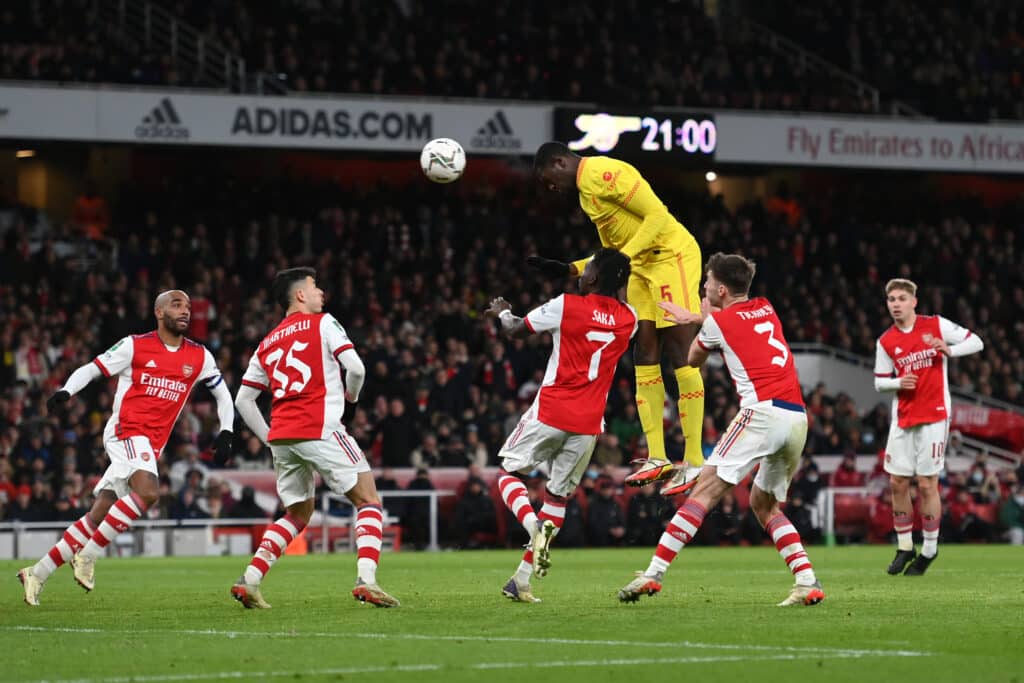 Matip made way for Ibrahima Konate at half-time in what appeared to be a fitness-related issue for the Cameroonian and Konate was tested early on as a spirited Gunners side looked to get at the Reds defence.

A clipped ball by Sambi Lokonga put Lacazette clear on goal but the Frenchman fired wildly over the crossbar with only Alisson to beat as an excellent opportunity went begging for Mikel Arteta's side.

The Reds should have doubled their advantage soon after as an incisive run by Jota down the left saw him give Ben White the slip before getting into the box and putting the ball on a plate for Gordon, but the youngster was unable to keep his cool as he blazed his shot over the crossbar.

Konate could have put Liverpool in full control of the tie after he rose above all and powerfully connected with Alexander-Arnold's out-swinging corner, but the ball crashed against the post before the linesman raised for offside against Jordan Henderson, whose follow-up went straight at goalkeeper Aaron Ramsdale.

Liverpool impressively went about their business as they limited Arsenal's time on the ball, particularly in the Reds' half, and put together some well-worked moves going the other way in search of another opening. 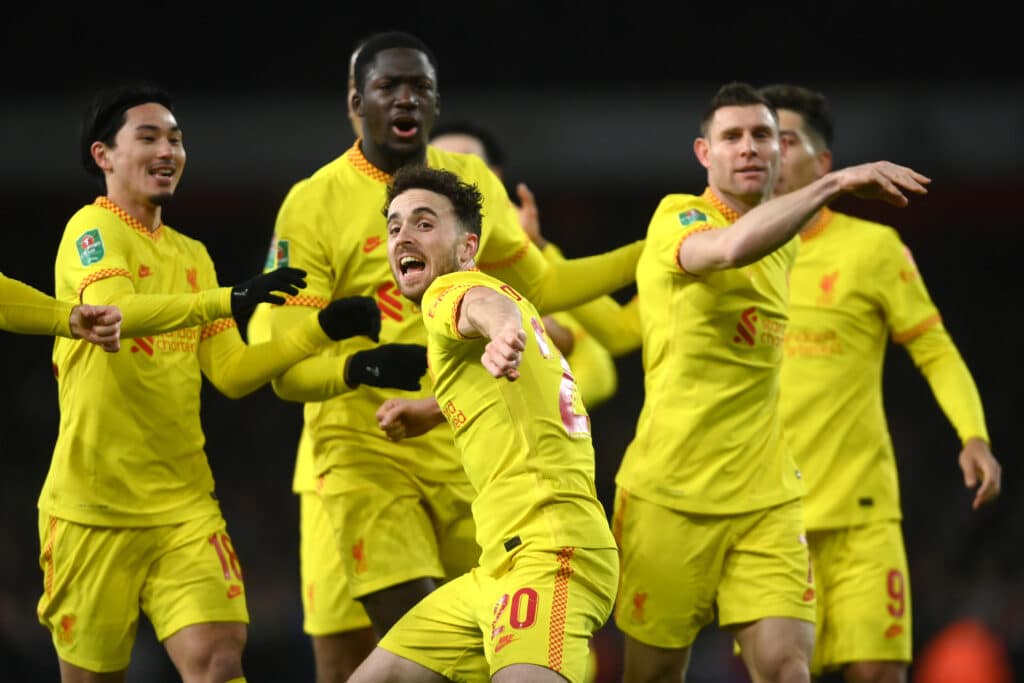 Gordon soon made way for Takumi Minamino as he slotted in just behind a front two of Firmino and Jota, with James Milner also coming on to replace Jordan Henderson for the final 15 minutes.

Liverpool continued to rack up the chances and they were rewarded for their attacking endeavours as Jota got in behind Arsenal's defence and controlled Alexander-Arnold's lofted pass before dinking the ball over Ramsdale and into the back of the net.

The linesman immediately flagged for offside but replays showed Gunners defender Gabriel was keeping him on, with VAR overturning the on-field decision and allowing the goal to put the Reds 2-0 up with ten minutes left on the clock.

Substitute Thomas Partey was booked twice in three minutes in the latter stages as Arsenal finished the game with ten men, with Liverpool ultimately cruising to victory without a bruise.