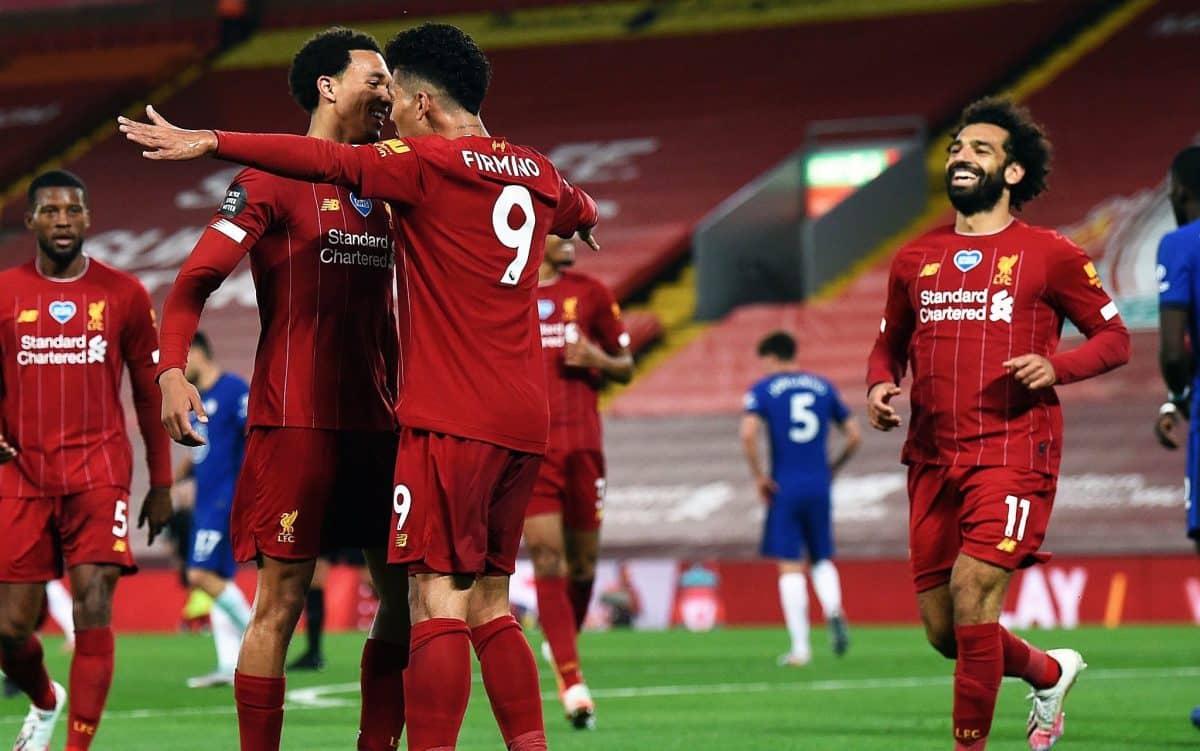 Liverpool beat Chelsea 5-3 on Wednesday night as they went on to finally lift the Premier League trophy at Anfield.

• As it happened →
• Title lift and celebrations →

Liverpool were crowned Premier League champions after an eventful ninety minutes at Anfield that saw them beat Frank Lampard's side 5-3.

It was a roller-coaster of a night culminating in the Reds lifting their first league title after 30 years, with Jordan Henderson doing the honours on the Kop. 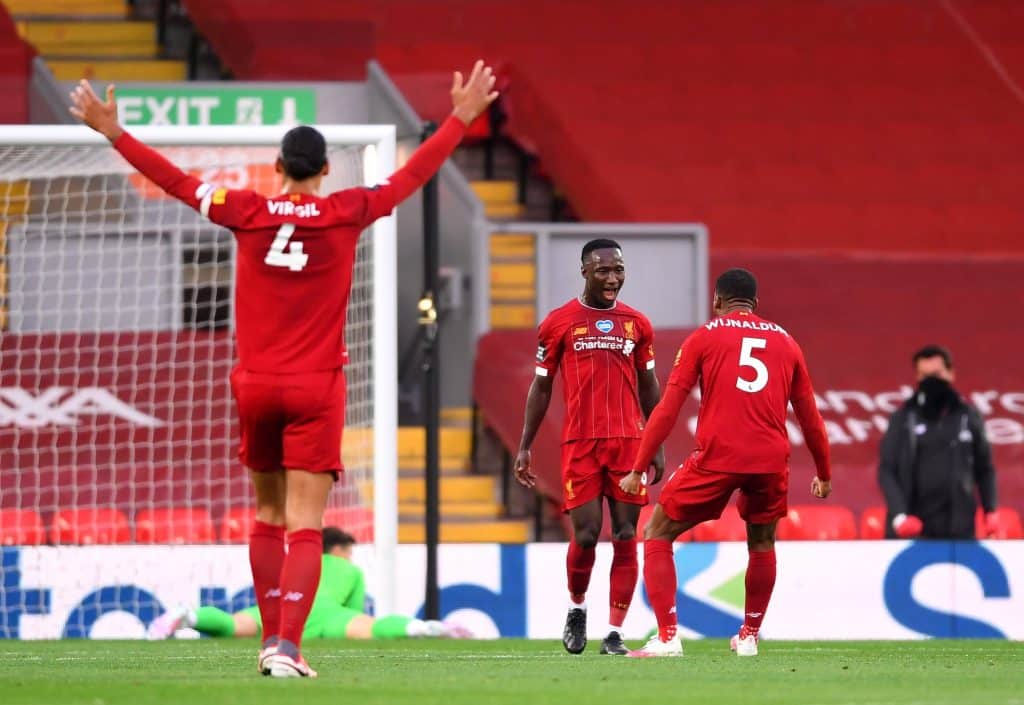 Chelsea missed a glaring chance inside the opening ten minutes as an unchallenged Mason Mount put his header from Reece James' cross over the crossbar.

Liverpool found it hard to contain Chelsea's wing-backs from marauding forwards, with James, in particular, driving down the Reds' right and causing issues in tandem with Willian.

It was an opening 20 minutes with few chances, but the Reds took the lead in emphatic fashion through Naby Keita.

A combination of Keita and Gini Wijnaldum won the ball in Chelsea's half, with Keita driving at the Blues defence and sending a rocket into the top-right corner, leaving Kepa Arrizabalaga with no chance in goal.

Mohamed Salah looked to be in the mood as Liverpool started to impose themselves on Frank Lampard's side. The Egyptian had the better of Antonio Rudiger several times as he got in behind the defence and threatened. 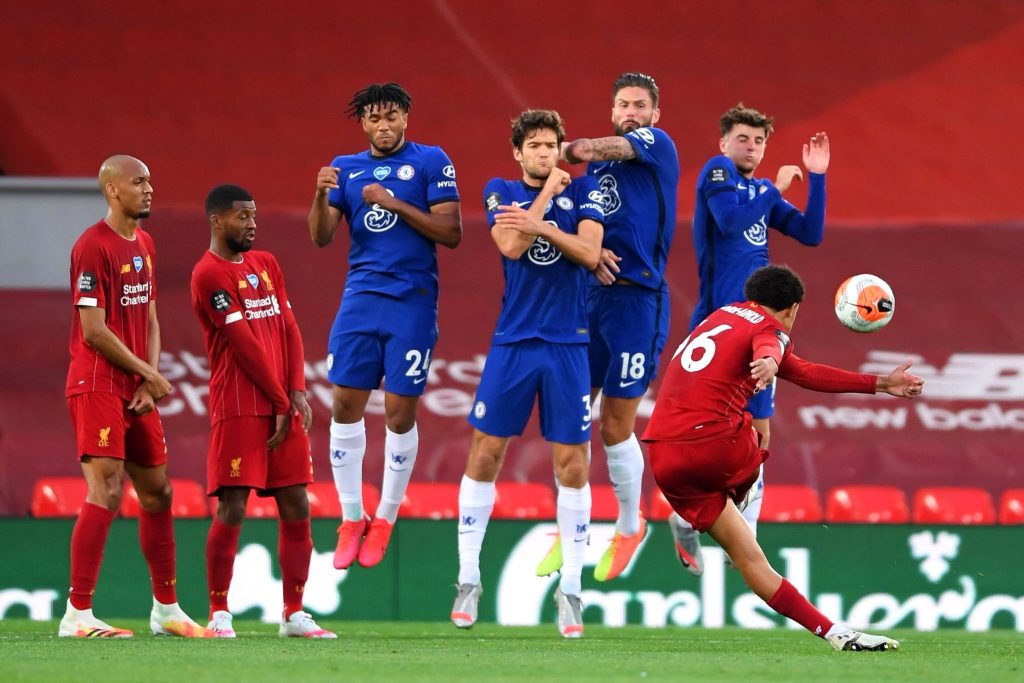 Chelsea, who fell off the pace after an impressive start, had the ball in the back of the net through Mount, but the youngster was rightly adjudged offside.

The champions doubled their lead in familiar fashion as Trent Alexander-Arnold repeated his free-kick antics against Chelsea and Crystal Palace this season.

The Reds right-back curled a powerful ball over the wall to score another world-class free-kick from distance to make it 2-0 to Jurgen Klopp's side.

It didn't take long for Liverpool to make it 3-0 as the ball fell to Wijnaldum from a corner, with the Dutchman smashing the ball into the back of the net from close range.

But Chelsea struck back on the stroke of half-time as Willian's shot was saved by Alisson, with the rebound falling to Olivier Giroud to turn home.

Salah had an excellent chance after the restart as he ran through on goal uncontested, but his strike from the outside of his left foot skewed horribly away from goal. 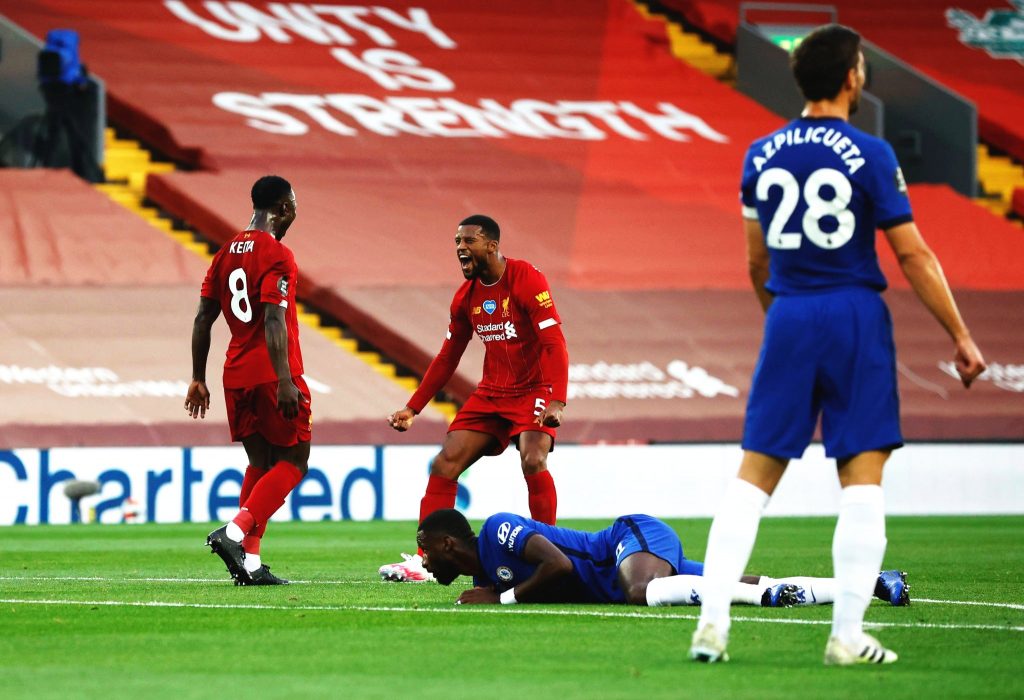 Roberto Firmino put an end to his Anfield drought as he headed home from Alexander-Arnold's pinpoint cross to make it 4-1. It was the Brazilian's first home league goal since March 2019, with relief on the face of both him and Klopp.

Salah had another couple of chances to put the Reds further ahead as he kept getting in behind Rudiger, but Liverpool's no. 11 wasn't at his clinical best on the night.

Substitutes Tammy Abraham and Christian Pulisic linked up to pull another back for the visitors, with Abraham side-footing the ball past Alisson from close-range.

Pulisic's influence on the game continued as he scored to make it 4-3, setting up a nervy final fifteen minutes.

But the Reds put the game to bed with a little over five minutes left as substitute Alex Oxlade-Chamberlain rounded off a vintage Liverpool counter-attack to seal a 5-3 victory.

Disclaimer: Liverpool vs Chelsea highlights, goals and full match videos are provided and hosted by external sources. We help you discover publicly available material and act as a search engine. We do not host or upload this material and are not responsible for the content.