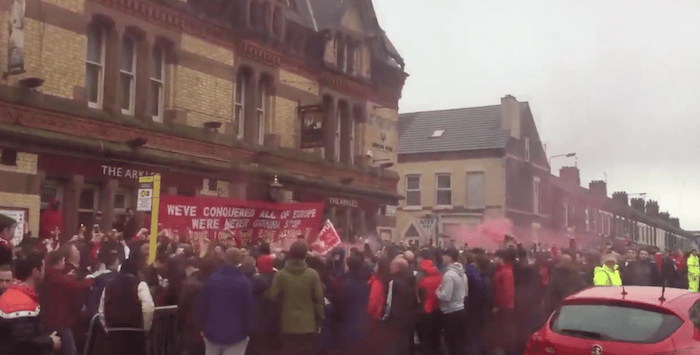 Liverpool fans gathered outside the Arkles Pub this afternoon, following a change of plans announced by the police, which redirected fans from the King Harry.

The atmosphere around Anfield has been building ahead of the tonight's crucial fixture against Manchester City and is only set to grow before this evening’s Champions League kick-off.

The atmosphere is building quite nicely. #LFC pic.twitter.com/ZQvGD7gjOu

Earlier, Merseyside police confirmed that both team buses would not be taking their usual route ‘due to building works and to ensure the safety of fans’.

Liverpool said in a statement: "Ensuring the health and safety of our fans and visitors is at the forefront of our all our procedures. The decision was therefore taken to redirect the team coaches via a new route following guidance from Merseyside Police.

"The club is working with the police and other key stakeholders to provide a safe environment for those supporters who wish to welcome the team ahead of the match against Manchester City.

"We have taken additional steps to make sure the area is as safe and secure as possible, whilst working with local residents to ensure that they remain unaffected by any potential fan activity.

"We ask that any supporters who do wish to gather to show their passion and support for the team, do so in a friendly, respectful and considerate manner."