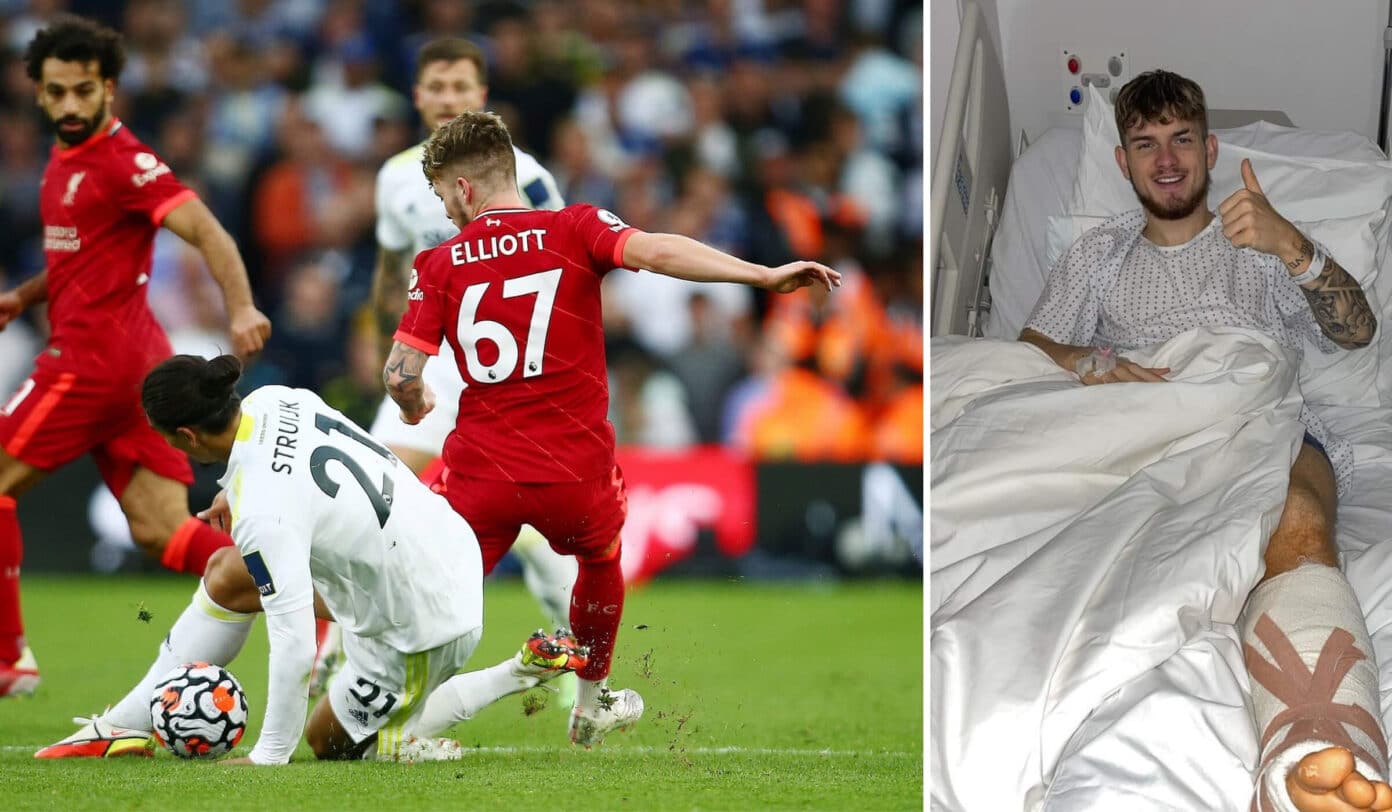 Liverpool have confirmed youngster Harvey Elliott has undergone a successful surgery today following the ankle injury he suffered against Leeds United at the weekend.

Jurgen Klopp's side ran out convincing 3-0 winners at Elland Road, but the victory was soured by the serious injury sustained by the 18-year-old, who was in visible pain following a tackle by Pascal Struijk in the second half.

Elliott suffered "a fracture-dislocation of the left joint" which requires extensive surgery to repair, with club doctor Dr Jim Moxon and physiotherapist Chris Morgan having initially popped his bone back in place before he was stretchered off the pitch on Sunday.

The club confirmed Elliott would "begin a rehabilitation programme" with Liverpool's medical department, while he is "expected to return to action later this season," despite the club not putting a specific timeline on his return.

Dr Moxon said: “Harvey sustained a fracture-dislocation of his left ankle during the game.

“We were able to reduce the dislocation immediately on the pitch and Harvey had surgery today to repair the fracture and ligaments damaged in the incident. The operation was a success so his comeback starts now.

“We won’t put pressure on him by setting a specific timeframe beyond being able to say with confidence we expect him to feature again later in the season following our rehab programme.”

After the surgery, Elliott shared a snap from his hospital bed, declaring the "road to recovery starts now."

"Operation was a success! Thank you so much to everyone for your amazing support. The road to recovery starts now. At the end of the storm there’s a golden sky," the youngster's caption read.

He also shared a longer message earlier on Monday, writing: "I’m of course absolutely devastated with what happened yesterday at Leeds, but have been totally overwhelmed by the love and support shown to me by the entire football world following the injury.

"Thank you so much to everyone who has reached out or sent messages to me and my family, it means so much to us. Also a massive thanks to everyone inside Elland Road for the reception you gave me immediately after it happened.

"I am now fully focused on my recovery and will give everything in my rehabilitation to be back out there as soon as I can. I know I have an incredible support network behind me at Liverpool and together we will get through this.

"To all of the Liverpool fans, your support means the world to me. I’m one of you and I can’t wait to be back faster, fitter and stronger to help the team in the future. You’ll Never Walk Alone!"

While it is hugely encouraging Liverpool's dazzling young star could be back in action by the end of the season, there's no doubt he faces a challenging road ahead, with this the first serious injury of his young career so far.

Nonetheless, the club will certainly take a pragmatic and sensible approach to his rehabilitation, with no need to rush him back into the fold ahead of time given his delicate age.

The hope is the injury will have no long-term repercussions or hold him back from what has otherwise been one of the most impressive entrances to the first team in years.