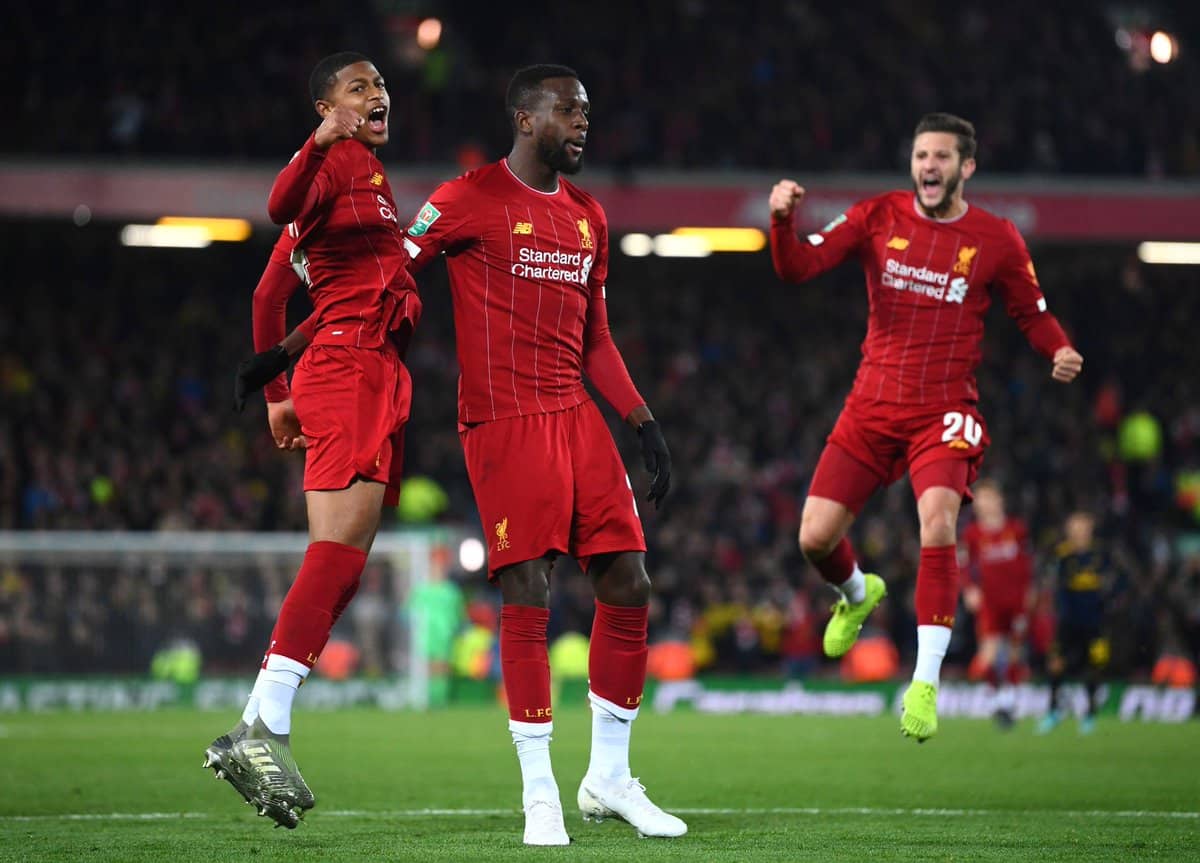 Liverpool vs Arsenal highlights - Liverpool beat Arsenal on penalties after a remarkable ten-goal thriller in the League Cup at Anfield.

With Liverpool’s priorities elsewhere this season, Jurgen Klopp continued his policy of heavy rotation in the League Cup this season as he made a full 11 changes to his side.

The young Reds got off to the perfect start after five minutes as Oxlade-Chamberlain's cross towards Brewster was diverted by Shkodran Mustafi into his own net. 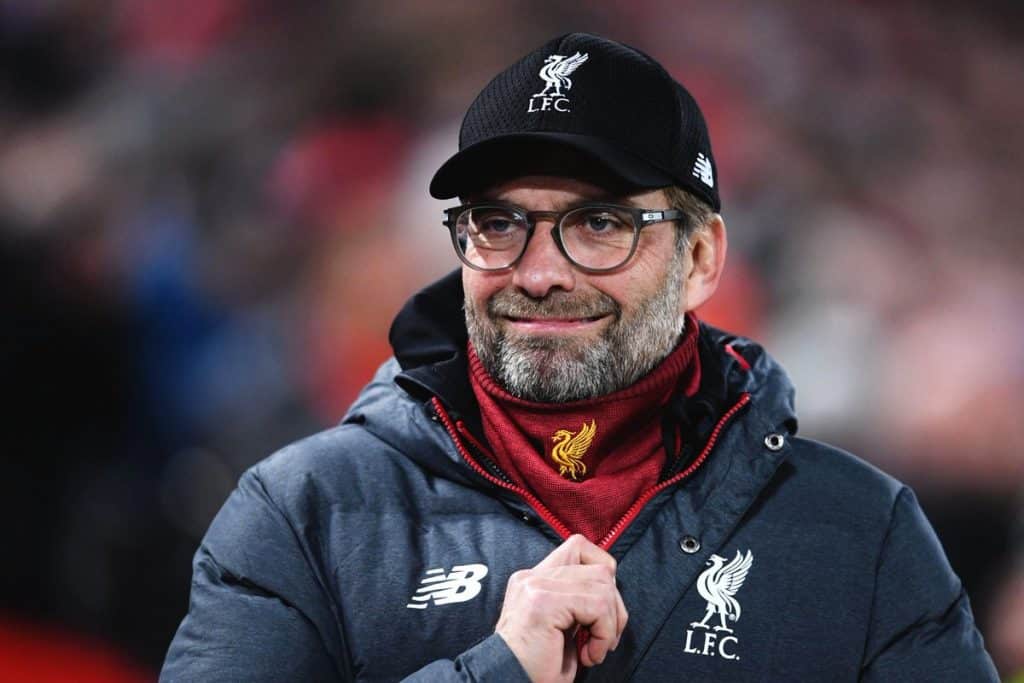 The visitors equalised just before the 20-minute mark as Mesut Ozil found an unmarked Bukayo Saka in the box. The youngster's attempt was saved by Kelleher, who could only push the ball out to Lucas Torreira, who tapped home with ease.

TV replays showed the Uruguayan was offside when Saka had his shot, however, with VAR not in use in the League Cup this season, the goal was allowed to stand.

They grabbed a second minutes later as the Reds' intensity appeared to drop. A quick free-kick saw Ainsley Maitland-Niles played through, with the right-back’s cross deflecting towards Kelleher, who made an excellent save.

However, striker Gabriel Martinelli continued his impressive goalscoring form as he was on hand to turn the rebound into the back of the net in front of a silenced Kop. 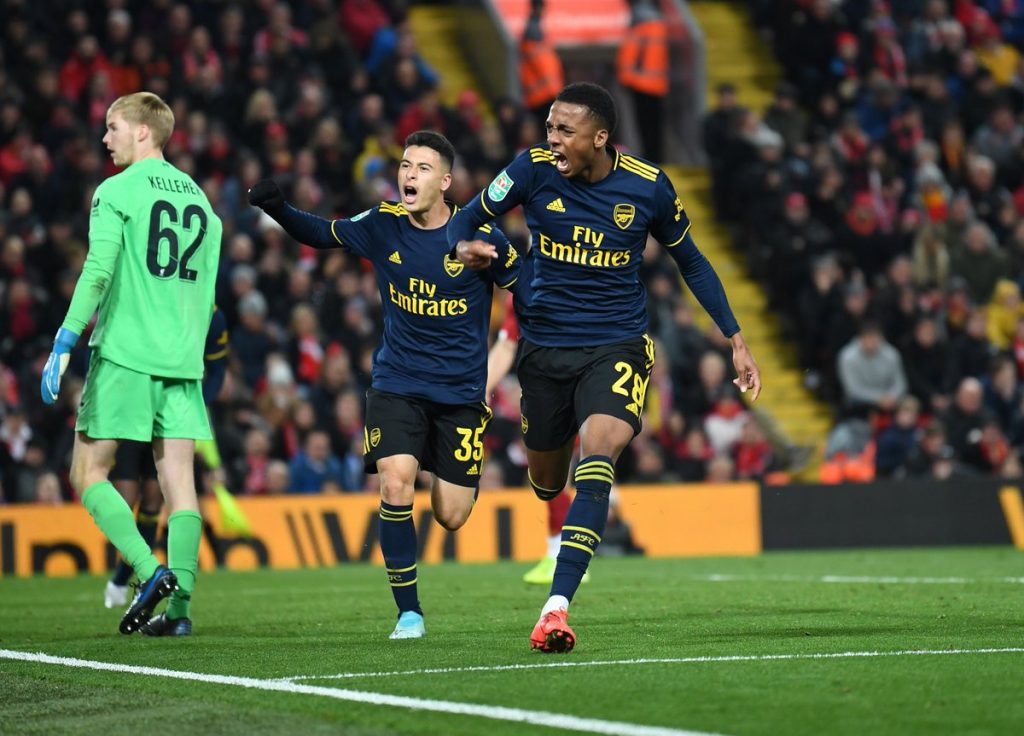 It got even worse for the Reds moments later as Elliot lost the ball in a dangerous area, with Saka squaring the ball for Martinelli, who made no mistake to score his second goal of the game.

Liverpool struggled to get a hold of the ball for long periods of the first-half, with Unai Emery’s side showing their superior experience in midfield to create several in-roads behind the Reds defence.

Liverpool found their way back into the game as Elliot was brought down in the box by Martinelli with a little under five minutes to go. The ever-reliable James Milner, who captained the side on the night, slotted the ball home with ease to make it 3-2.

Arsenal grabbed a fourth less than ten minutes after the restart as Milner’s back-pass to Kelleher lacked the distance. Maitland-Niles intercepted and knocked it wide, with Ozil keeping it in and finding the right-back who rolled it home from inches out. 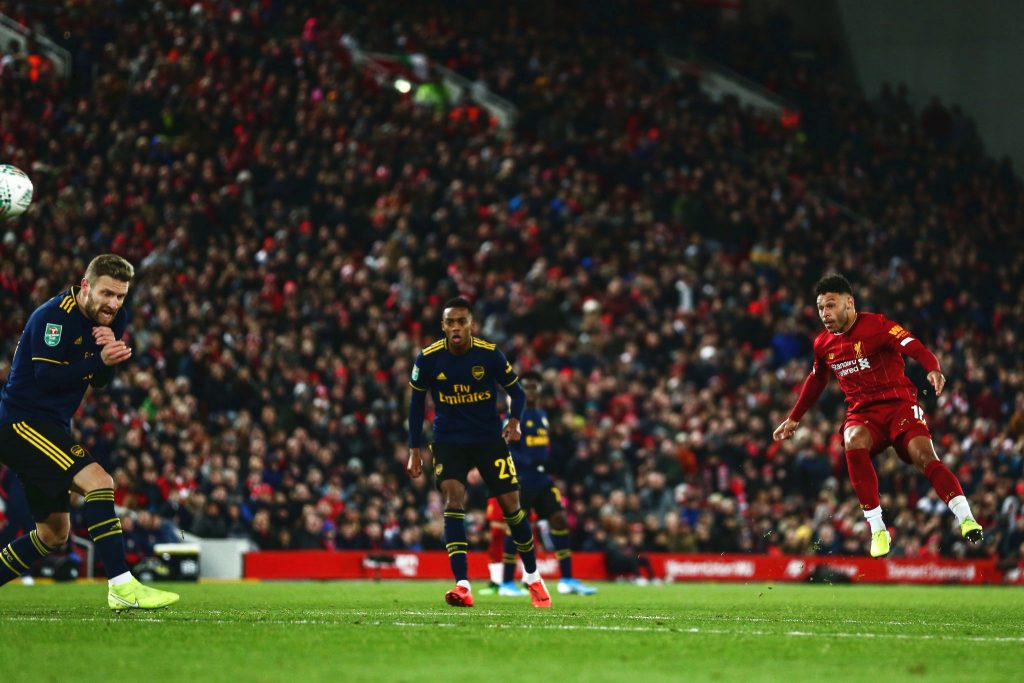 Liverpool responded immediately through Oxlade-Chamberlain as he nipped in to win the ball from 25 yards out and sent a smashing effort past Emiliano Martinez.

Klopp’s side then found an equaliser four minutes later as substitute Curtis Jones found Origi, who finished superbly with a swiveling shot from the edge of the box to make it 4-4.

Despite Liverpool being on top, Arsenal pulled ahead again as Joe Willock drove towards the Reds defence, who continued to back off. The youngster sent a fantastic swerving shot past Kelleher as Emery’s side made it a 5-4.

With Liverpool looking like crashing out of the League Cup, right-back Williams got to the byline and found Origi, who scored with a stunning bicycle kick to take the game to penalties.

Both sides scored their first three spot-kicks before Dani Ceballos had his effort saved by Kelleher. Jones netted the Reds' fifth and final penalty to send them into the quarter-finals of the League Cup after a rollercoaster night at Anfield.

Disclaimer: Liverpool vs Arsenal highlights are provided and hosted by external sources, notably DailyMotion, YouTube and forstreams.com. We help you discover publicly available material and act as a search engine. We do not host or upload this material and are not responsible for the content.