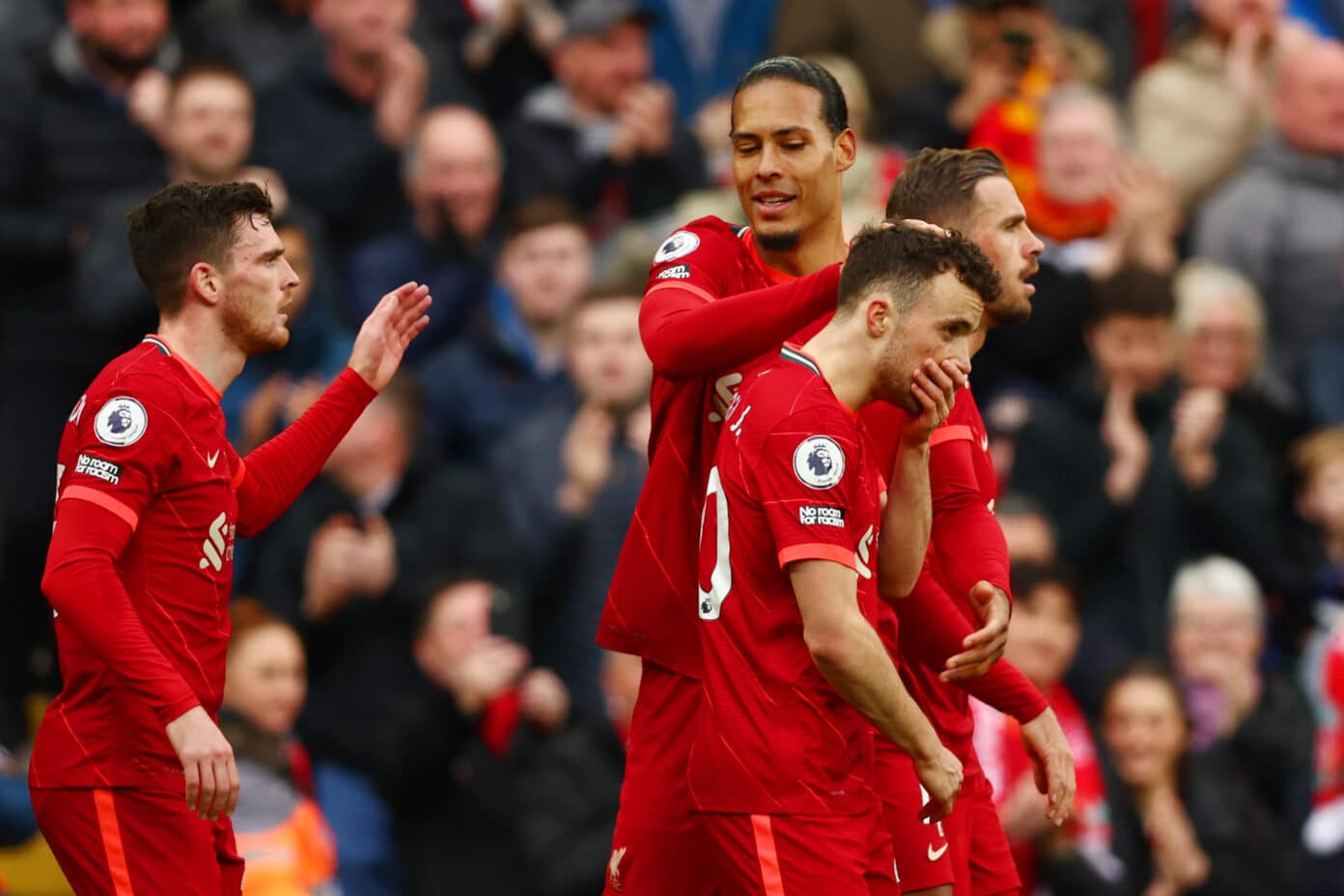 Liverpool beat Watford 2-0 at Anfield in the early kick-off on Saturday as they leapfrogged Manchester City at the summit of the Premier League table.

Liverpool were far from their best but they still went into the break 1-0 up thanks to Diogo Jota's header from an excellent Joe Gomez cross midway through the first half.

Jurgen Klopp's side imparted much more control in the second half and despite finding chances hard to come by, they sealed a 2-0 win thanks to a late penalty from substitute Fabinho to make it 10 consecutive league wins.

The Reds now sit two points ahead of Man City at the top of the Premier League table, with City facing a trip to Burnley later today before the two sides meet at the Etihad in a pivotal clash next weekend. 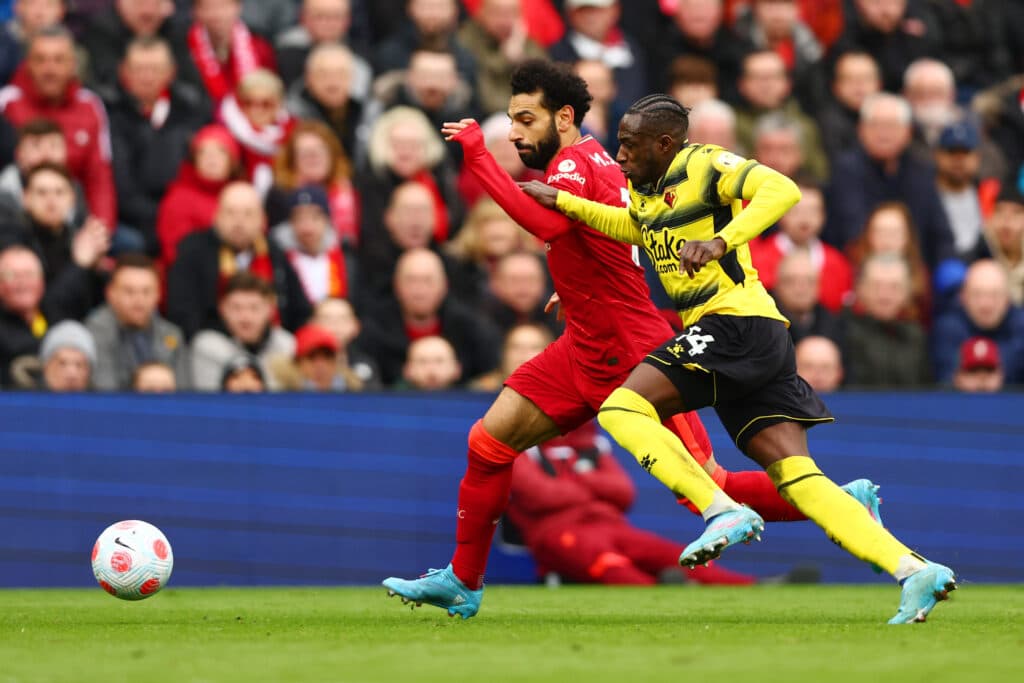 Trent Alexander-Arnold started from the bench as Joe Gomez came into the side at right-back, whilst Andy Robertson also returned to the starting eleven following a positive COVID-19 test that kept him out of the Reds' last outing.

Curtis Jones made a rare Premier League start in a midfield trio of Thiago and Jordan Henderson, whilst Mohamed Salah returned to the front three alongside Diogo Jota and Roberto Firmino.

It was a relatively quiet start for the Reds, who struggled to create any openings in the early stages and had to do their fair share of defending up against the lively pair of Ismaila Sarr and Cucho Hernandez.

A quick counter-attack by Watford saw Juraj Kucka played through on goal before his low strike was crucially saved by Alisson, and it took less than a minute for the Reds to respond at the other end with a chance of their own, which was snapped up by Diogo Jota.

The ball made its way out to the right as Gomez picked up the ball and spotted the run of Jota before delivering a pinpoint cross into the box, with Jota nipping in ahead of goalkeeper Ben Foster to glance home and put the Reds 1-0 ahead. 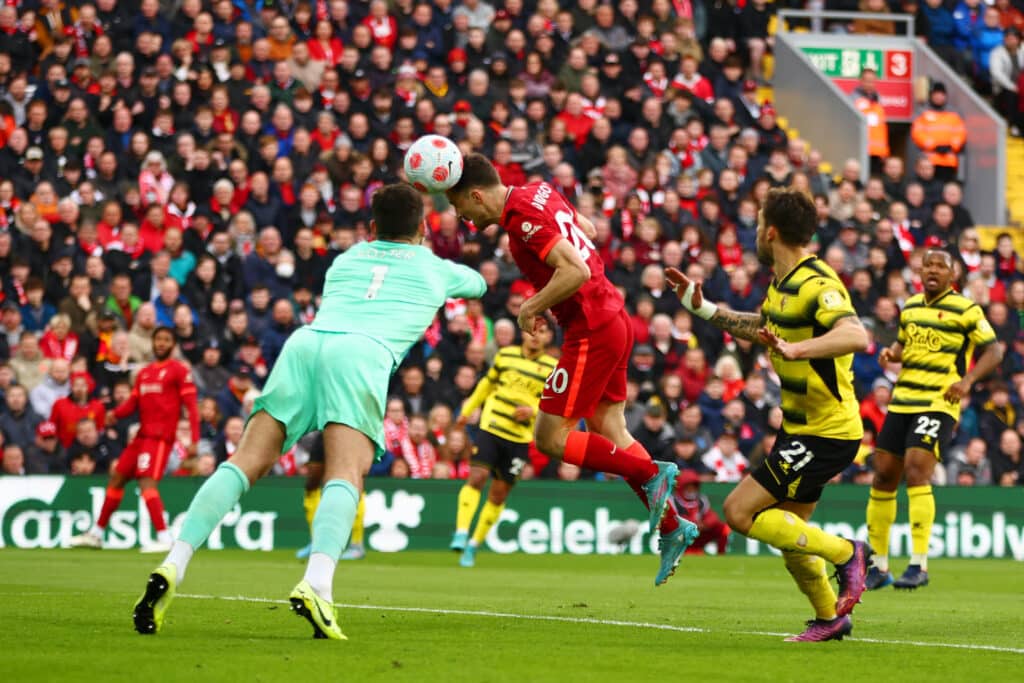 Joel Matip looked favourite to head home from Robertson's corner, only to be pipped to the ball by Hernandez before the ball landed at the feet of Thiago, whose first-time volley swerved off-target.

An improvised routine from a corner saw Matip's backheel make its way to Jota at the far post, who had support from Henderson and Firmino in the middle, but the Portugal international opted for a strike at goal which was smothered by Foster.

An exquisite cross by Gomez at the start of the second half looked to be set to make its way onto the head of Robertson, but Hornets defender Christian Kabasele intervened and put the ball behind.

Van Dijk rose highest for a deep Jones corner after escaping the grasp of Moussa Sissoko, but the Dutchman failed to get his header on target as the ball flew over the crossbar.

Watford had a golden chance to get back on level terms as Sarr beat the offside trap and squared the ball for Joao Pedro, who looked to direct the ball into the bottom far corner but was unable to impart enough curl on the ball. 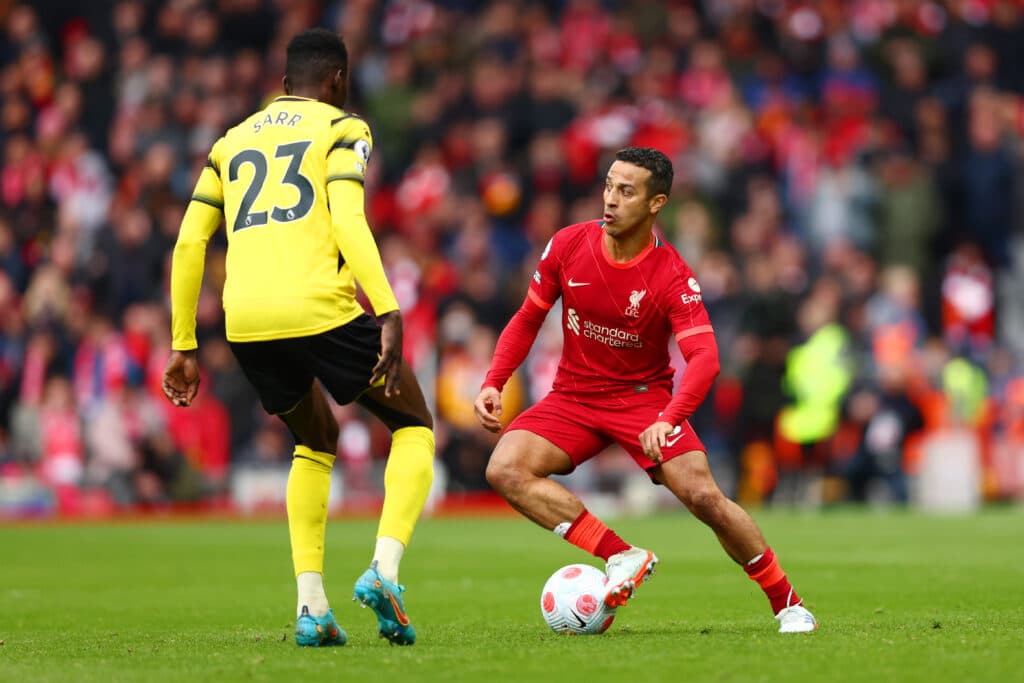 Jota had two opportunities to add to his first-half header as he met consecutive crosses by Henderson into the box, with the first going over the crossbar and the second going the wrong side of the post.

Jones made way for Fabinho after the hour mark and he nearly made an instant impact as his floated ball into the box was met by Salah, but the Egyptian's header failed to trouble Foster in goal.

A lofted ball by Gomez towards the back post found the run of Robertson, who looked to steer the ball towards the onrushing Firmino inside the six-yard box, but Foster was alive to the danger as he intervened for Roy Hodgson's side.

Jota was brought down inside the box from a Reds corner by Kucka, with the referee awarding a penalty after consulting the VAR monitor, as Fabinho stepped up from the spot and provided an immaculate finish into the top corner to clinch a 2-0 win.

All attention now turns to midweek's Champions League quarter-final first-leg against Benfica, before the Reds travel to the Etihad next weekend for a mammoth clash against Manchester City in what could turn out to be a title decider.