Jurgen Klopp was pleased with his side after they started their Champions League campaign with a 1-0 away win over Ajax on Wednesday night.

The Reds kicked off their European campaign with a solid win against Erik ten Hag's side, with Nicolas Tagliafico's own goal from Sadio Mane's deflected shot enough to seal their first three points of Group D.

Liverpool, without Virgil van Dijk and Joel Matip in defence, gave away a few chances to the home side but came out unscathed.

The fact the Reds kept a clean sheet was largely down to a brilliant goal-line clearance from Fabinho, who put in another impressive performance at the back alongside Joe Gomez.

"How I said, this combination with Joey and Fabinho, I don't think they played together before if I'm 100 per cent right. Maybe once but I don't really know," Klopp told reporters during his post-match press conference.

"It was a really good performance but there's a lot to improve – how high or how low is the last line in which moment, in protection situations, in the pressing, 'How do we react there?'

"But it's no problem. For tonight it was absolutely good and now we carry on."

The boss admitted there was "pressure" on Fabinho and Gomez due to the fragility of Liverpool's options in defence. However, he insisted Fabinho "likes" featuring at centre-back - which bodes well during Van Dijk's absence.

"Of course, was there pressure on the situation? Yes, it’s clear for the two in the back there, 100 per cent. First game together.

"Fabinho can play the position, he likes playing it actually. If I would have asked him to play right-back I don’t think he would enjoy it as much as he’s enjoying the centre-half position.

"In our situation at the moment we have to keep those boys fit and then they can, of course, help us a lot.

"I’m not surprised he [Fabinho] plays well in the position otherwise we would have thought about a different solution, even when that would have been properly tricky. I’m really pleased about tonight, pleased for him, yes it gave him confidence, for sure helped us. 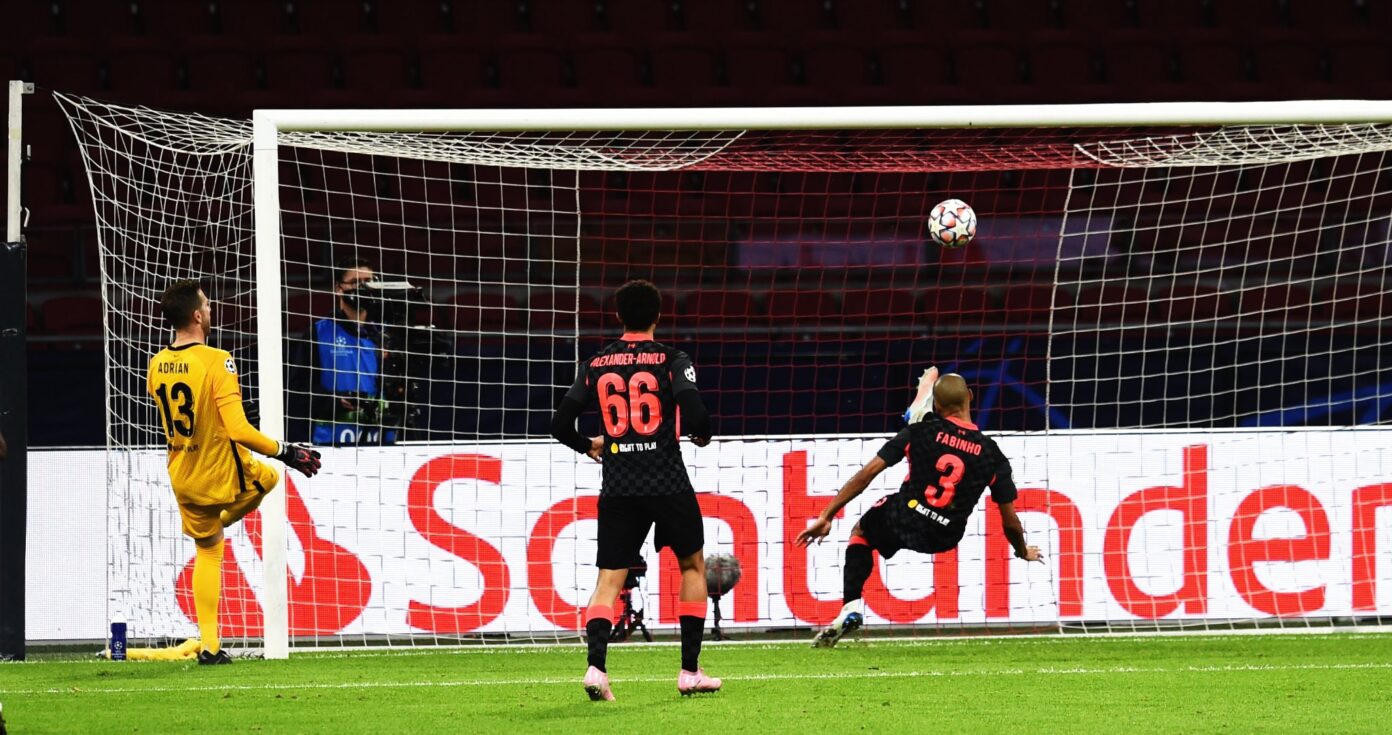 Asked about his general thoughts on the game, Klopp added: "Both teams can play better football. But especially in this competition when you play away, a lot of difficulties, pretty much the medical department made the line-up and then you have to win the game – and that's what the boys did.

"I think that was deserved, even when we had to clear one ball from the line and when they hit the post. Of course they had their moments but apart from that, we were pretty dominant on a difficult pitch for both teams.

"I think everybody knows that Ajax is usually a brilliant football team but tonight it was really tricky, the passing was difficult, so you could see that. But we won the game and I'm completely fine."

The Reds have been shaky at the back this season - none more so than their 7-2 defeat against Aston Villa earlier this month - so a clean sheet against the Dutch champions is a welcome development. 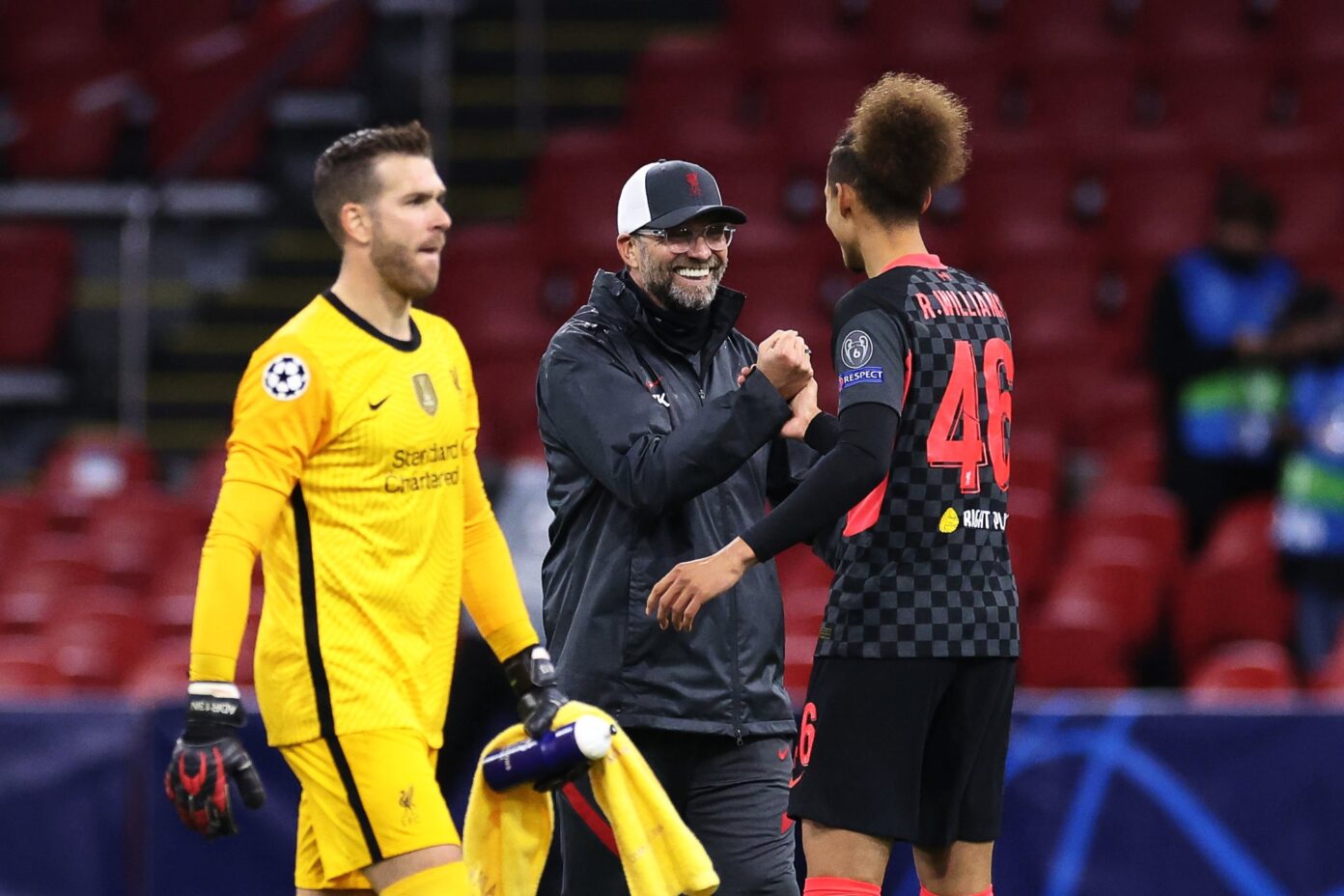 With Sheffield United on the horizon this weekend, Klopp insisted the Reds won't dwell for too long on their shutout as they focus their attention on the Blades.

"We don’t hang the clean sheet too high because there were two situations where we were far away from perfect. But that’s it and for tonight, absolutely OK," Klopp said.

"Saturday [is] a completely different challenge, Sheffield United tonight with their legs on the sofa. And we need to recover now really quickly, that we will be ready for that game."

Klopp also confirmed Sadio Mane is fine after the winger was pictured icing his right knee on the substitutes' bench after coming off in the second half.

There was also praise for Diogo Jota, Takumi Minamino and Xherdan Shaqiri, who came on as a triple substitution 30 minutes from the end.

"All three who came on are, first, in really good shape, fresh in a tricky, difficult game on a difficult pitch. That helps a lot and you saw they helped a lot," Klopp said.

"Shaq won deflections, which is pretty special. Taki in both directions, incredible between the lines. And Diogo is a machine so he can punish opponents in one-on-one situations.

"We had these moments, we didn’t finish them off, unfortunately. But it’s completely fine, it was important for them.

"Now we started the group, now we have to concentrate on the league again and then Midtjylland is waiting after that."