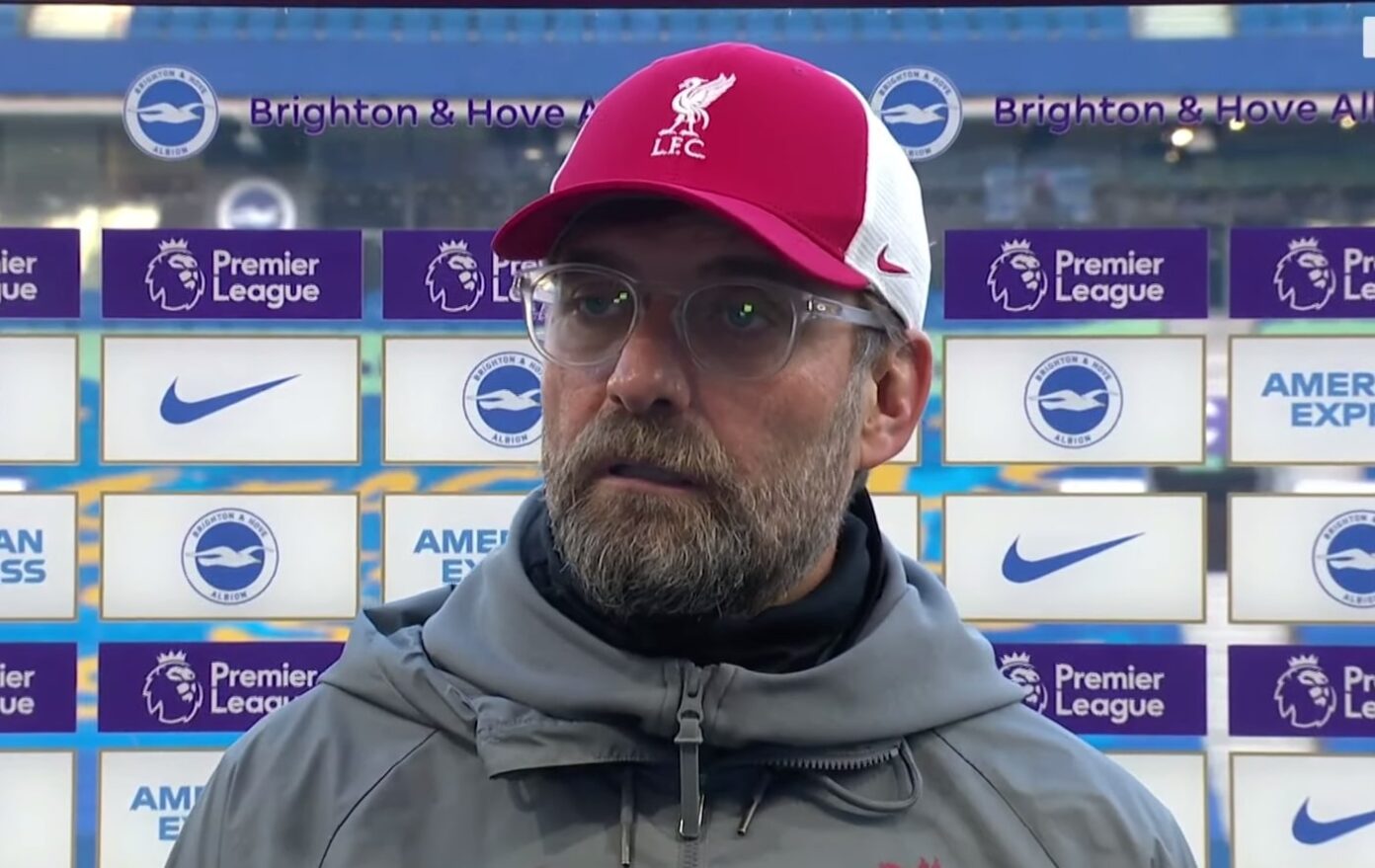 Liverpool manager Jurgen Klopp clashed with BT Sport's Des Kelly during his post-match interview after the Reds' 1-1 draw against Brighton.

The Reds had two goals disallowed for offside and went on to concede a late penalty through Andy Robertson as they saw three points turn to one at the Amex on Saturday.

The meeting between the two sides came less than 72 hours after Liverpool's defeat against Atalanta in the Champions League, with Klopp again showing his disdain for his side's schedule so far this season.

Speaking after the game, Klopp confirmed Milner suffered a hamstring injury as he took swipe at BT for picking Liverpool in the 12.30pm slot on Saturday, hours after their European exploits in midweek.

"You (BT Sport) my special friends ask us to go on Saturday at 12.30pm, which is nearly a crime to be honest. It has nothing to do with the game tonight but congratulations for that," Klopp said.

Klopp also said managers were largely in favour of the five-sub rule but questioned the likes of Sheffield United manager Chris Wilder for refusing to back the change.

Read on for a full transcript of Klopp's exchange with Kelly…

Kelly: "James Milner, hamstring is it?"

Klopp: "No, but you work for them yeah? Hamstring. Surprise. And they had injuries as well because it's a tough time. But ask Chris Wilder how we avoid that.

Klopp: "These are difficult times."

Kelly: "Of course it's difficult, the stadiums are empty and the broadcasters are supporting the game."

Kelly: "Your chief executives and other chief executives should be having that discussion. If you come down here and just have a go at the broadcaster, it doesn't go anywhere, it's not going to change anything.

Klopp: "I'm not having a go at the broadcasters, I just say how it is.

Kelly: "You said it was criminal."

Klopp: "Playing 12:30 after Wednesday is really dangerous for the Premier League players."

Kelly: "You also said the broadcasters don't care and that's the problem. That isn't the problem..."

Klopp: "Why did you pick us against Crystal Palace if you care?"

Kelly: "Well, I didn't pick it but every pick is agreed by the Premier League, with every executive around that table."

Klopp: "You always rely on things we agreed in another time..."

Klopp: "That's very interesting. Because when we had the talk between the managers a week ago, it was 15-5 or 16-4 in favour of five subs. But since then nothing happened.

"You need at least at least 14 votes and Chris Wilder or whoever, constantly say I'm selfish. I think all the things he's said shows that he's selfish but that's not too important. I was in a similar situation as he is when I worked at Mainz - all about staying in the league.

"But now they [can make] three subs and have one point. So there's no advantage or disadvantage. If you can do five subs in a game like this, it's not for tactical reasons.

"For example, if we have had five subs today I would have taken off Robbo for Kostas to save Robbo, not to make our game better. It's just to save the players. It's for all players. You will it from now on until December. We will see."

Kelly: "We agree with you and I understand what you're saying, but you're going about it the wrong way. You're attacking the broadcaster instead of getting the support you need in the way you need in the Premier League meeting.

Klopp: "You will get praise for your interview because you stuck to [your point], so, great. What I want to say is that I only go for the broadcasters for the Wednesday and 12.30 [on Saturday]. Only seven managers have a similar problem and we all agree.

"I should stop doing it, and I want to, as it doesn't help. The problem is we signed this contract... in this season it's a bigger problem, no pre-season, because of the intensity, the shorter season etc. When we get this slot, it's not OK."

"Have a look how many - I am not selfish but I obviously speak about Liverpool -when his year is over, we've had this slot three times. Who else has had it three times? No one. Of course it's a problem for me as I pick a team."