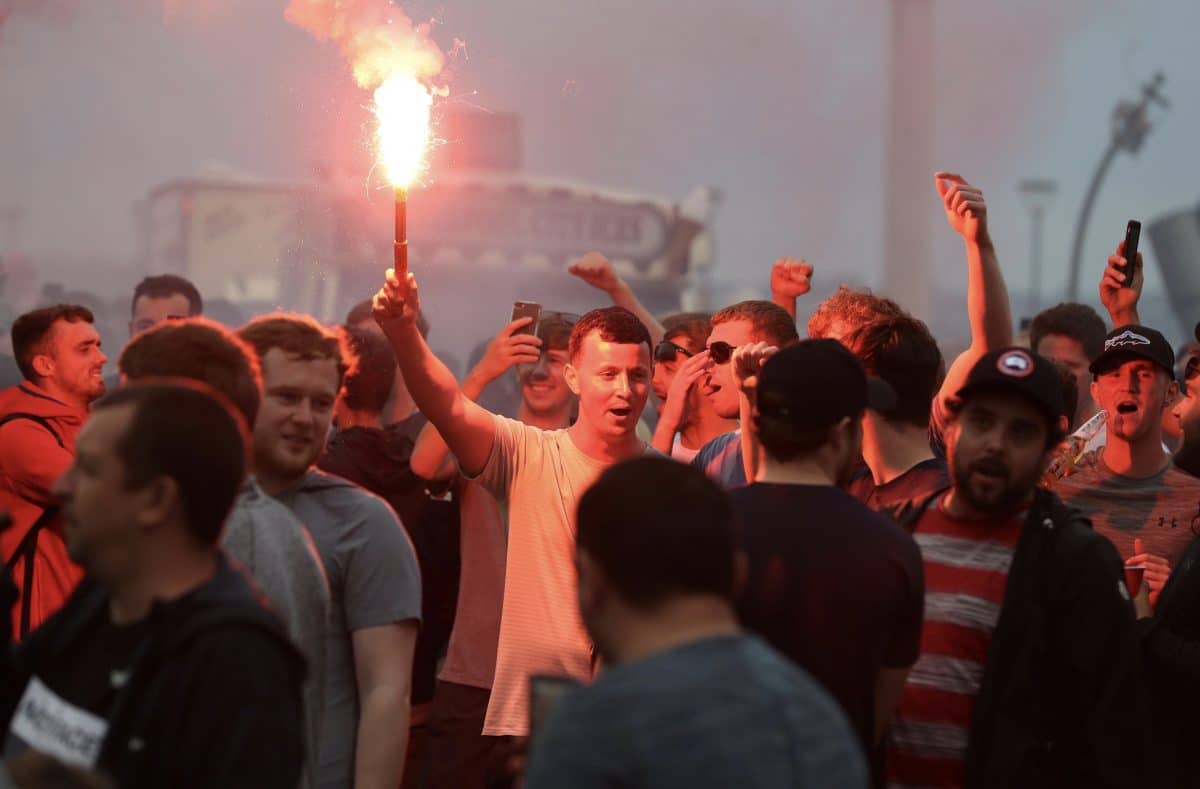 Liverpool FC condemned the behaviour of supporters who gathered in the city centre to celebrate the Reds' title win.

Liverpool won the Premier League title on Thursday, prompting supporters to gather outside Anfield to mark a momentous moment in the club’s history.

As the Liverpool players celebrated together at a hotel through the night, Reds supporters partied outside Anfield into the early hours.

Crowds gathered again on Friday evening, this time in the city centre, with the Pier Head slowly filling up throughout the evening.

While the vast majority of supporters were simply enjoying having a chat and a pint, shocking footage on social media showed one man aiming a firework at a blue-lit section of the Liver Building - causing a fire to break out.

Merseyside Police immediately enforced new powers to try and disperse the crowds. But disorder broke out as the night went on, with the police force confirming injuries to ‘multiple’ people.

Several users on Twitter claim there was a stabbing in the city centre as events took a further unsavoury turn.

What the fuck am I actually seeing just won the league and someone’s been stabbed while they’re celebrating it 🥴🥴 pic.twitter.com/uIWmr7PJyl

The above video, shared on Twitter, showed the supposed aftermath of the stabbing as emergency services tend to an injured man on the ground amidst concerns from onlookers.

With the ongoing coronavirus pandemic still a huge concern in the North West, Liverpool manager Jurgen Klopp had asked supporters to celebrate at home instead of coming out on the streets.

However, the relief and joy of winning a first league title in 30 years - the first since the Premier League’s inception - proved too much for swathes of supporters.

Throughout the last week, Liverpool Football Club, Merseyside Police, Liverpool City Council and Spirit of Shankly have worked together to consistently remind people that the region is still disproportionately affected by the COVID-19 pandemic and ask people to celebrate LFC’s Premier League title win safely.

Several thousand people turned up at the Pier Head on Friday June 26 and some chose to ignore the social distancing guidance and risk public safety.

Our city is still in a public health crisis and this behaviour is wholly unacceptable.

The potential danger of a second peak of COVID-19 still exists and we need to work together to make sure we don’t undo everything that has been achieved as a region during lockdown.

When it is safe to do so, we will all work together to arrange a victory parade when everyone can come together to celebrate. Until that time, the safety of our city and our people continues to be our number one priority.

Meanwhile, Liverpool mayor Joe Anderson said: “People are drinking and causing problems and we just want to make sure that everyone stays safe.

"Large gatherings like these are still not something the city needs as coronavirus continues to be a real risk for us here.”

He added: “Tomorrow we will look again at what we can do to make sure people are kept safe and this doesn't keep happening.

"Maybe a curfew could be put in place as police powers have already been upped in the city to deal with anti-social behaviour."