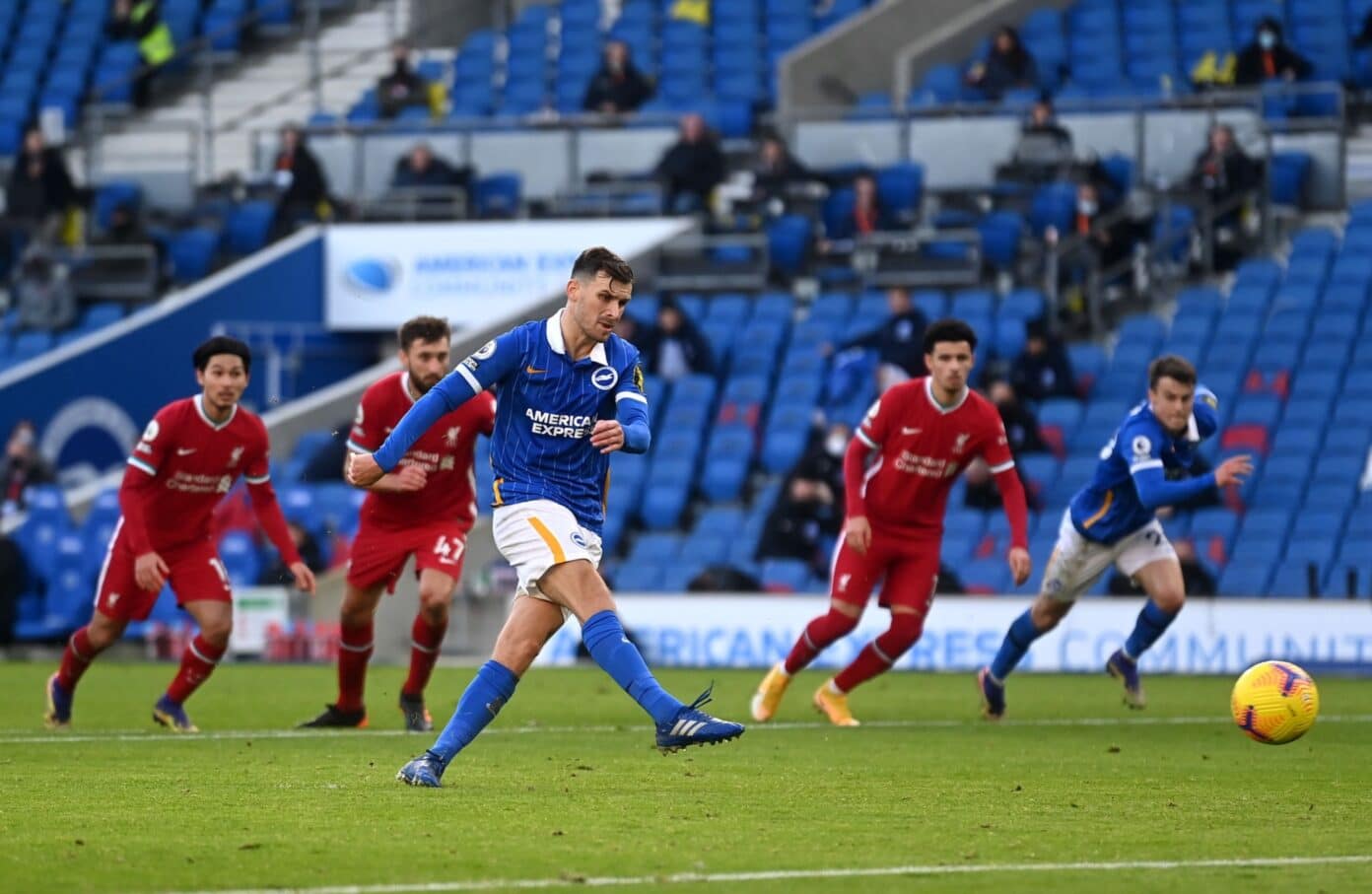 Liverpool were denied three points after late drama against Brighton and Hove Albion at the Amex Stadium on Saturday.

Liverpool lead the Premier League table - at least for 24 hours - despite dropping two points late on against the Seagulls.

The Reds went ahead through Diogo Jota just before the hour mark, but a soft penalty given away by Andy Robertson in injury-time saw Pascal Gross earn the home side a point. 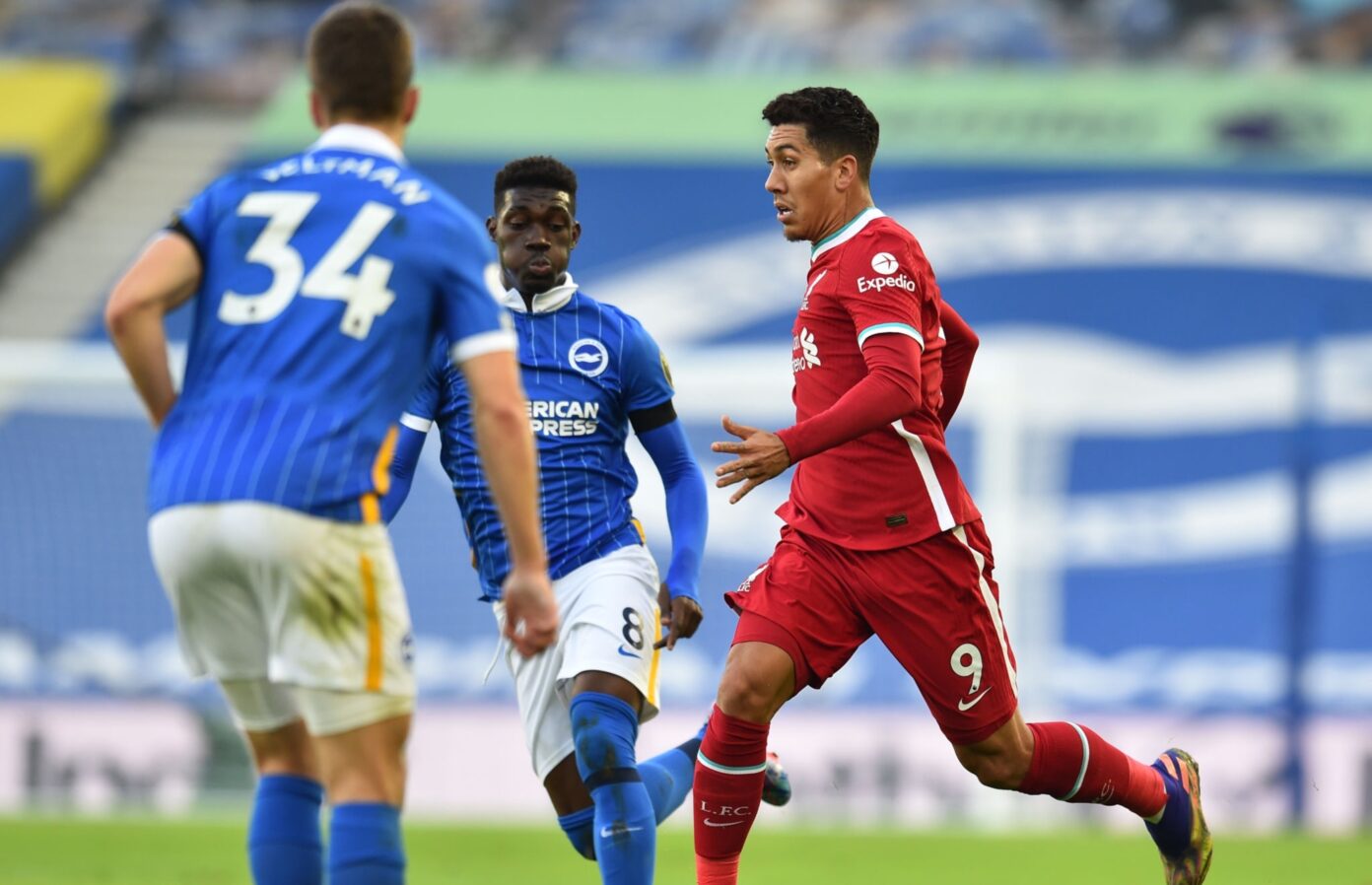 Jurgen Klopp made six changes to the side that lost against Atalanta in midweek. Fabinho and Nathaniel Phillips lined up at the back, while there were also starts for the likes of Takumi Minamino and Diogo Jota.

The Reds nearly made it 1-0 inside the opening two minutes after a well-worked move between Roberto Firmino and Diogo Jota. The Portuguese got in behind and looked to feed Mohamed Salah, but Solly March was at hand to make a crucial interception.

Brighton then had a far better opportunity through Aaron Connolly, who beat the Reds' high-line and got in behind before failing to hit the target with a scuffed effort.

Connolly, with his sharp runs and positioning, continued to cause Liverpool problems at the back and he was rewarded for his efforts just before the 20-minute mark.

The Irishman was brought down inside the box by Neco Williams, with referee Stuart Attwell pointing to the spot. Neal Maupay stepped up but couldn't keep his shot on target as the Reds breathed a sigh of relief. 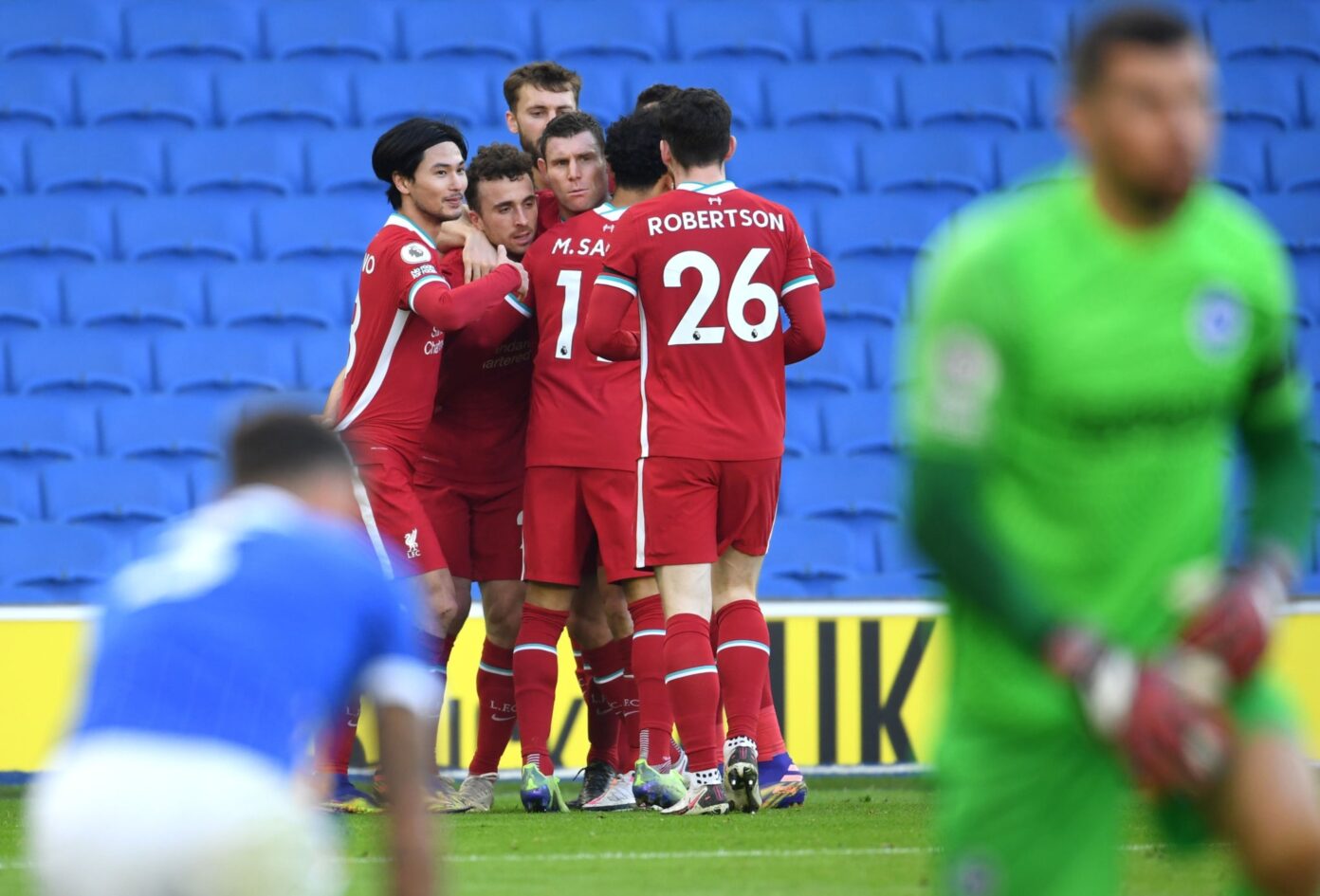 With a little over ten minutes until the break, Firmino played Salah in behind, with the Egyptian finding the back of the net. But replays showed Salah may have been marginally offside, with VAR ruling out the strike.

Klopp made a change at half-time as Williams was withdrawn for Jordan Henderson, with James Milner slotting in at right-back.

The Reds looked more solid through the middle with Henderson's presence and they finally took the lead as Jota danced across the edge of the box and dispatched the ball into the bottom corner in excellent fashion to make it 1-0.

Sadio Mane came on from the bench to replace Salah just minutes after the Reds' opener, with the Reds' No.11 visibly unhappy at being substituted.

Liverpool's fitness woes continued as Milner was forced off with a suspected hamstring injury, with youngster Curtis Jones being trusted to replace him at right-back.

Mane converted from a set-piece with an excellent header as he looked to have sealed the three points for the Reds. But VAR intervened for the second time to rule a Liverpool goal out, with replays showing the Senegal international was offside.

With just minutes remaining, Andy Robertson was adjudged to have kicked Danny Welbeck inside the box whilst making a clearance.

Pascal Gross stepped up for the home side and coolly dispatched the penalty to make it 1-1 - a cruel blow for the Reds who had done all the leg work in the game.

It was ultimately another disappointing day at the office for the Reds, who were hoping to put their Champions League defeat behind them with a win at the Amex.