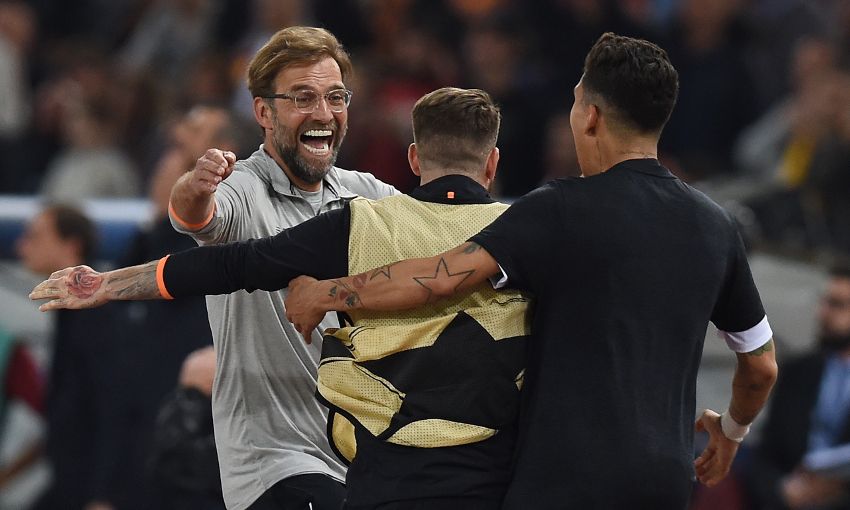 Liverpool were beaten 4-2 by the Serie A side in the second-leg, having led 2-1 at half-time. However, they progressed by the odd goal in 13 and will now face Real Madrid in Kiev with the Champions League trophy at stake on May 26.

Klopp looked ahead to the final against holders Real and the importance of winning the sixth European Cup for Liverpool, plus the two crucial Premier League fixtures before the final later this month.

Praising Roma, before summarising his thoughts on the tie, Klopp said: "I have to start, and it’s easy to do so, with a big compliment for Roma – what a performance, what a comeback, what a brave football game.

"There were always little rhythm breaks in the game and we controlled it again. But especially in the high intense moments, we had brilliant counter-attacks but were not patient enough to finish them. Because we didn’t do that it was clear the game stays open and everything can happen.

"They had all these situations in the box and we defended these much too deep. In a game like this they should have been offside 20 times. That’s the story of the game.

"They scored a third one with a shot from distance and the fourth one is a penalty. I heard about a few penalty situations but I didn’t see them back so far. It was the first time that we were not really as good as we can be, so we needed luck and that’s what we had.

"But, over the whole Champions League campaign so far, it is absolutely deserved. As I said before the game, it would have been deserved for Roma.

"It was a fantastic ride so far and now we will go to Kiev, which sounds crazy – but it’s the truth."

On the prospect of taking Liverpool to the final of the Champions League, to face Real Madrid, he said his side will be ready.

"Look, we were in the League Cup final and we didn’t win it. People don’t tell me in the street since then ‘thank you for bringing us to the final’. We were in the Europa League final. I didn’t see any trophies after these games. They don’t hang silver medals at Melwood," he added.

"That’s the pity, that’s the game. So there’s still a job to do but that’s how it is. Going to a final is really nice – I did it a few times – but winning it is even nicer. We will be ready.

"You cannot be more experienced in the competition than Real Madrid. I think pretty much 80 per cent of the team played all these finals – four times in the last five years – and they are still together.

"So if we talk about experience, they are experienced and we are not. But we will be really on fire, you can imagine.

"We are looking forward to it but before that we have to play two more Champions League semi-finals in the Premier League. That is first of all the job to do. Then we’ll have two weeks to prepare the final and we will use that time."

On the remaining games in the Premier League, Klopp said his squad will spend Thursday recovering from their exertions before putting all their focus in to Chelsea at the weekend.

"Do we have the widest squad in world football at the moment? No. We don’t have it, so it’s quite a difficult moment. That this group went to the final is exceptional," Klopp explained.

"We had all the knocks over the season, all the knocks with injuries in the wrong moments and stuff like that. Really difficult. And we still have to carry on, so it’s not that we can say now we are already qualified for the Champions League next year.

"Chelsea at the weekend is an unbelievably important game for us. I give the boys tonight; it’s cool, they don’t drink alcohol, but they will stay a little bit longer awake and then we recover tomorrow."