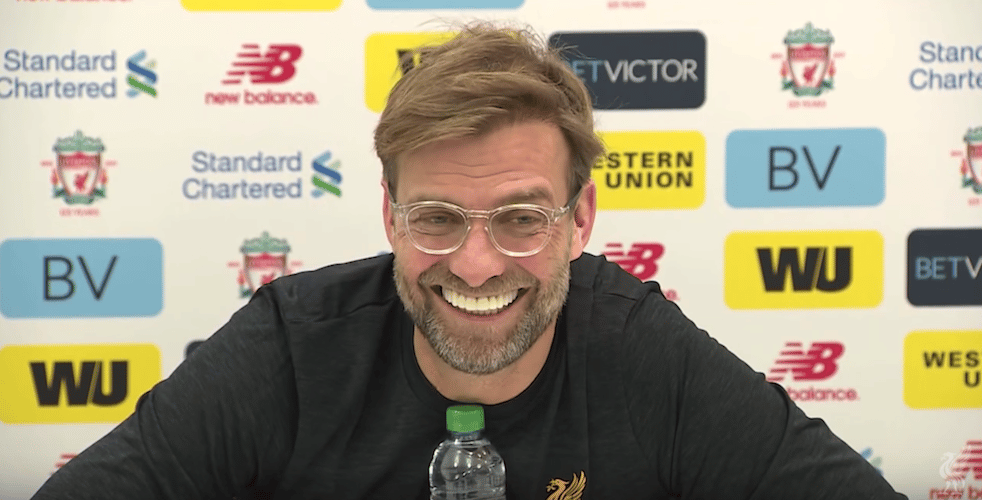 Jurgen Klopp spoke to the media ahead of Liverpool's Premier League clash with Southampton on Sunday.

The manager spoke about a range of issues ahead of the game. Virgil van Dijk, Dejan Lovren, Adam Lallana, Alex Oxlade-Chamberlain and Sadio Mané have all played at Southampton in the past, and the manager was keen to give his thoughts.

“Yes I will for sure talk to Virgil about it," Klopp said on the latest January signing from the Saints in Van Dijk.

“With the other players I didn’t talk about it because I didn’t know where they were all coming from. I didn’t know about the special story, but now I do.

“Yes we will talk about it and we will see.”

Klopp added on the atmosphere he expects at the ground: “I don’t know exactly but probably it will not be the most friendly.

“The people in Southampton, since I am in, they were always really nice with Clyney, I don’t know exactly why; Adam Lallana, obviously they missed the most; Dejan Lovren; Sadio Mane I think was OK, I’m not 100 per cent sure, and then Virgil is the last one so that’s how it is.

“I really understand that but it’s nothing we really think about. It will be more normal in the future but now we have to go there and play football and nothing else.

“I absolutely don’t think anybody in Southampton would say we’ve stolen him or something, it was a very public deal and the numbers – even when they are not 100 per cent right – I think OK, maybe they are really happy and they would say ‘thank you for all the money we have now’!”

Klopp highlighted their academy and went on to joke: “Maybe we should have a scouting department directly in Southampton! It shows how good the work is there.”

You can watch the full press conference above.