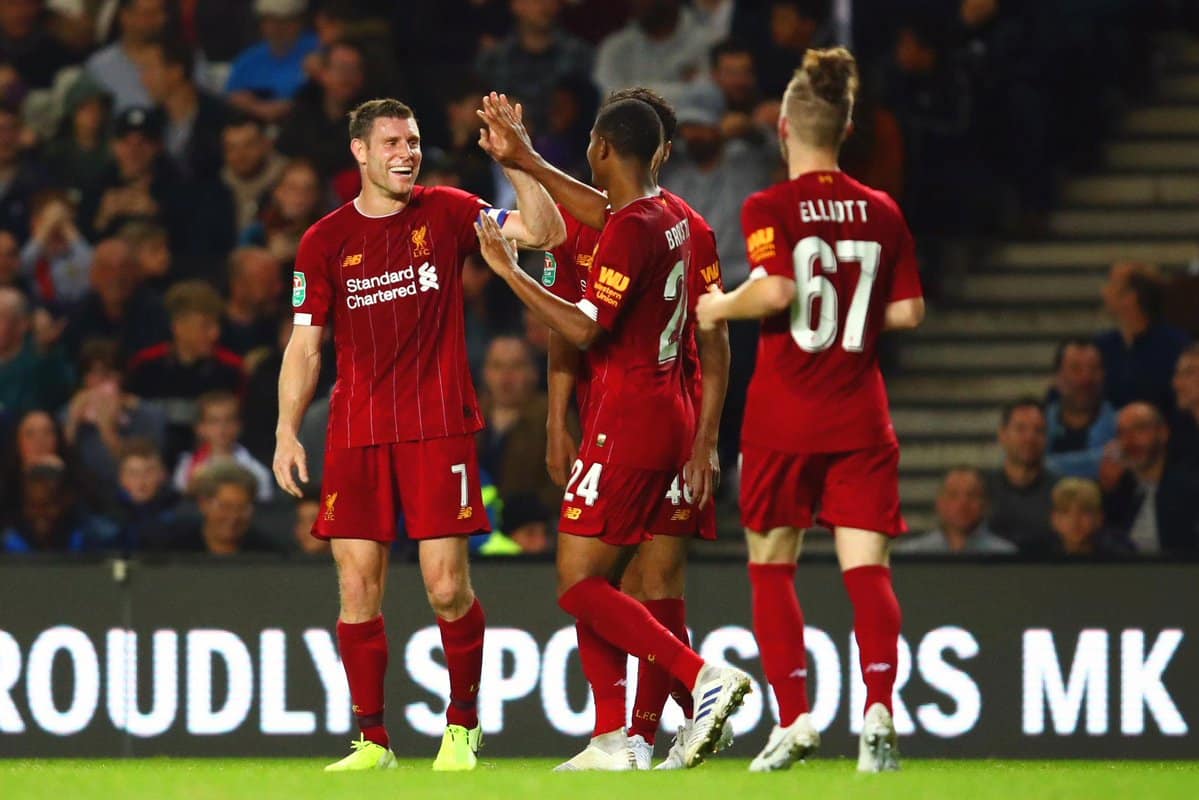 MK Dons vs Liverpool highlights - Liverpool advanced to the fourth round of the League Cup after beating MK Dons 2-0.

Despite a much-changed Liverpool line-up that saw first-team debuts handed to Caoimhin Kelleher, Rhian Brewster, and Harvey Elliot, the Reds got into their stride early on, keeping plenty of the ball.

The home side were presented with a rare opportunity against the run of play as a Dejan Lovren mistake led to the ball being cut back to Conor McGrandles. However, he could only manage to direct his effort over the crossbar.

Liverpool instantly hit back with a golden chance of their own as James Milner squared up defender George Williams and found Elliot in the box. However, the young Welshman could only hit the underside of the crossbar from close-range. 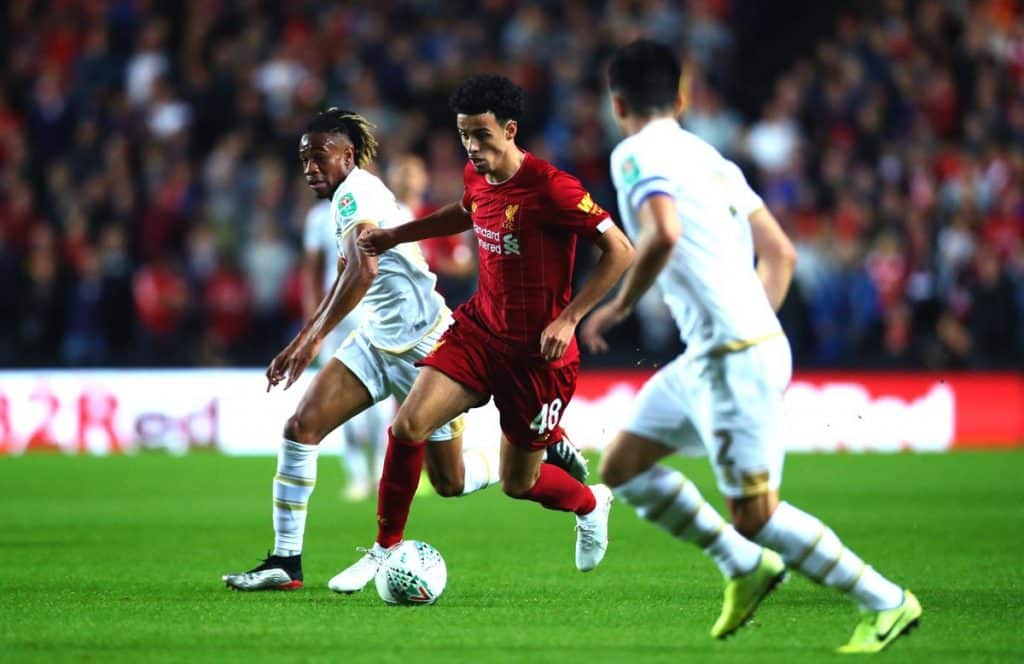 Elliot and Milner linked up again moments later as the impressive 16-year-old cut inside and sent a floated ball on to the head of Milner, who could only steer the header tantalisingly wide off the far post.

Milner didn’t stop down the left-wing and was often Liverpool’s most creative player. He got his reward in the 41st minute as he sent a powerful strike straight at goalkeeper Stuart Moore, who fumbled and let the ball into the back of the net to make it 1-0 to the visitors.

Paul Tisdale’s side had a couple of moments of their own, but it was all Liverpool for the first 45 minutes, and it continued much the same after the break.

Elliot started the second half strongly and had two good opportunities after good play down the right, with one of his shots lashing into the side-netting. 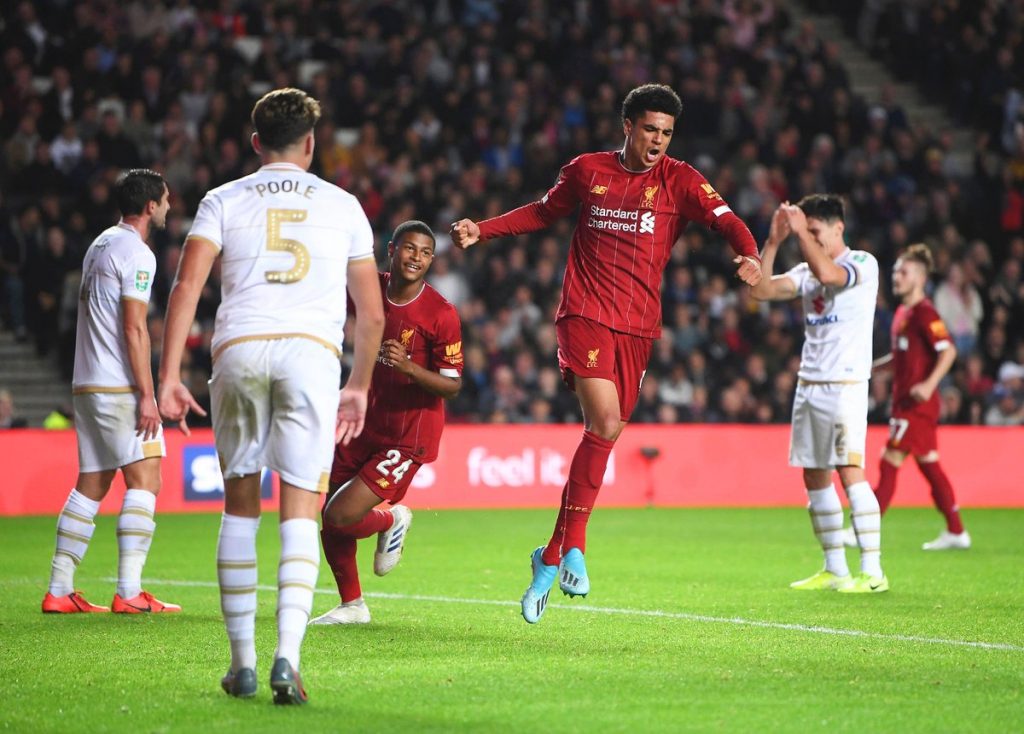 The Dons came close to a leveller as Jordan Bowery and Milner both attacked a cross into the Liverpool box, with the ball squeezing against the base of the woodwork.

Naby Keita, who had been out of action for six weeks, played for just over an hour before being replaced by Pedro Chirivella. The Guinean understandably looked as if he was struggling with his match fitness, so it was an important run-out for the midfielder.

The Reds doubled their advantage with a little over 20 minutes to go as Ki-Jana Hoever got on the end of one of Milner's many crosses to send an excellent powerful header past Moore.

Oxlade-Chamberlain came close to making it 3-0, only for Moore to get a hand to his low strike. At the other end, Kelleher produced a fantastic save to deny Bowery from close-range before Lovren blocked on the line from Williams.

Elliot came close once again in the closing stages as he hit the woodwork for the third time, but in the end it finished just 2-0 to the Reds as they progress into the fourth round of the League Cup.

Disclaimer: MK Dons vs Liverpool highlights are provided and hosted by external sources, notably DailyMotion, YouTube and vidstreamup.com. We help you discover publicly available material and act as a search engine. We do not host or upload this material and are not responsible for the content.