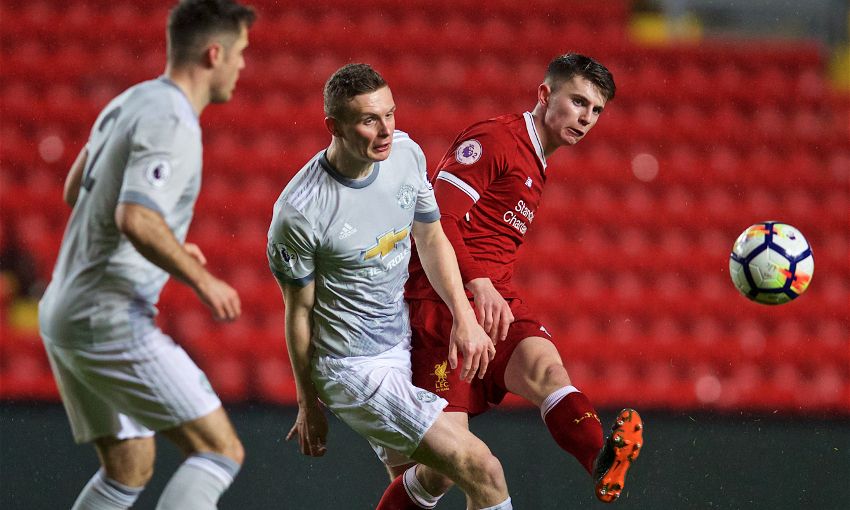 Liverpool U23s suffered a late 2-1 defeat against Manchester United in an absorbing Premier League 2 match at Anfield on Friday night.

Following a goalless first half, Adam Lewis put Neil Critchley's side in front with a brilliant free-kick at the Kop end during the second half. However the visitors scored two goals in three minutes to snatch all three points late on.

Neil Critchley included Danny Ward and Ben Woodburn in the starting eleven as they looked for a response to their previous 4-0 loss against Leicester City on Monday evening.

The game was an entertaining and keenly-fought one and played in front of 5,049 spectators at Anfield on Friday night.

Liverpool’s young Reds are next in action against Manchester City on Wednesday in the quarter-finals of the UEFA Youth League.

The win boosts United's hopes of avoiding relegation from Premier League 2. Victory takes bottom side United to 15 points, two behind Tottenham in 10th.

Wales international Ben Woodburn came off injured late on and headed straight down the tunnel. However Critchley allayed any fears: "He just felt his hamstrings tighten up a little bit towards the end of the game so we just brought him off as a precaution.

"He was fine. He's had food poisoning and had been out for a period of time so it was a bonus he stayed on as long as he did really."