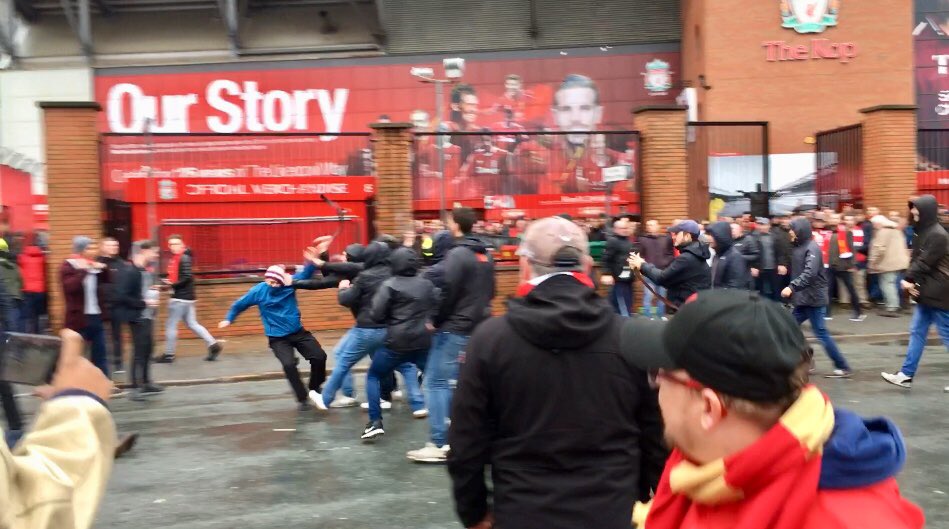 A Liverpool fan has been left in critical condition following an incident just before kick-off in Liverpool's meeting with AS Roma in the Champions League semi-final first leg on Tuesday night.

The police have confirmed they have made arrests following various incidents, including the one that left a Liverpool supporter in critical condition.

Merseyside Police released a statement, confirming that "nine men, aged between 20 and 43 years, were arrested for various offences including attempted murder, affray, Section 47 assault, possession of offensive weapons, possession of a controlled drug, criminal damage and being drunk and disorderly" before and after the meeting.

Superintendent Dave Charnock, said: “A minority of fans from both Liverpool and Roma were involved in isolated pockets of disorder in the city centre and near to the ground.

“During one incident a 53-year-old man, believed to be a Liverpool fan, was assaulted near to the ground during what is believed to have been an altercation between Roma and Liverpool fans. He is currently being treated for his injuries at Walton Neurological Centre, where his condition is described as critical.

"Two men, aged 25 and 26 years from Rome, have been arrested on suspicion of attempted murder and have been taken to a police station where they will be interviewed by detectives."

The club also released a statement following the game, saying: "Liverpool Football Club is shocked and appalled after a Liverpool supporter was left in a critical condition having been attacked prior to the Champions League fixture against AS Roma.

"Our thoughts, in the first instance, are with the victim and his family at this very traumatic time. We will be offering them our full support.

"The club has been liaising with the emergency services since the incident occurred and will continue to do so."

Journalist Jonathan Northcroft also confirmed the hostility of the environment: “Roma fans have just attacked Liverpool supporters with belts, outside the Albert.

“About 20. One guy down getting treatment. The Roma group came out of Venmore St, and attack was sudden. Picked an older Liverpool fan and attacked him.

"A lot of police around but they were slow on the scene. Poor guy is still down. Horrible stuff.

“Roma group were chased down the street before police arrived.”

Liverpool manager Jurgen Klopp had urged Reds fans to maintain good behaviour ahead of the clash following events that took place before the quarter-final tie against Manchester City.

He said: “In the stadium, do it again, outside the stadium please show the respect we have to show. This is such a fantastic club, an outstanding football family, known for a fantastic atmosphere all over the world so we don’t need to throw whatever at the bus of the opponent team.

“If we can do what we did creating an atmosphere in front of the stadium then let’s do it but show the respect they deserve. We are opponents on the pitch.”

Further reports of trouble after the final whistle as Liverpool supporters are locked into pubs as security staff try to prevent the premises from being stormed by Roma ultras. Fans speak of “running a gauntlet to get buses and taxis” #LIVASR