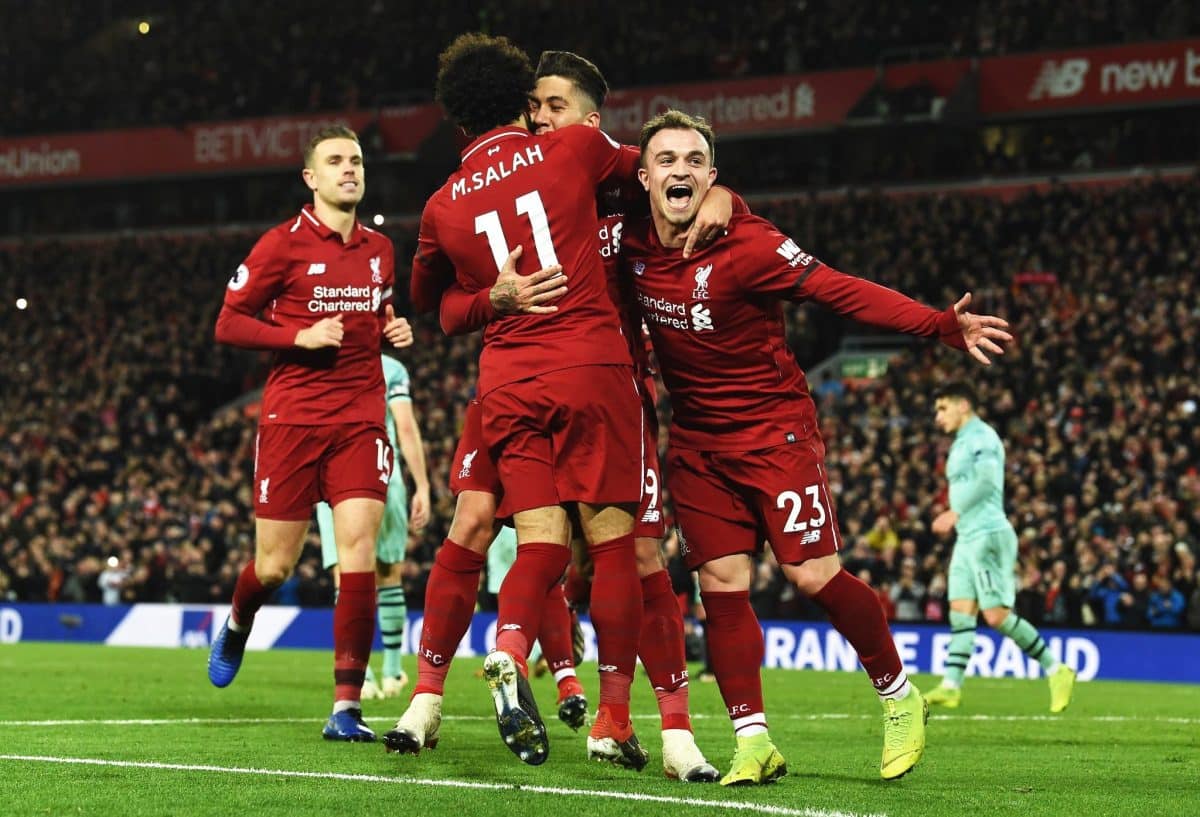 Liverpool vs Arsenal highlights - The Reds dispatched the Gunners at Anfield to extend their lead at the top of the Premier League.

With Tottenham losing 3-1 to Wolverhampton Wanderers in the earlier kick-off in the day, Jurgen Klopp's side were aware victory would hand them a 9 point lead, with Man City in action on Sunday.

And they did just that as a hat-trick from Roberto Firmino and goals from Mohamed Salah and Sadio Mane put Arsenal to the sword in a dominant display at Anfield.

Liverpool started the match brightly, but it was the visitors that took the lead early in the first-half. 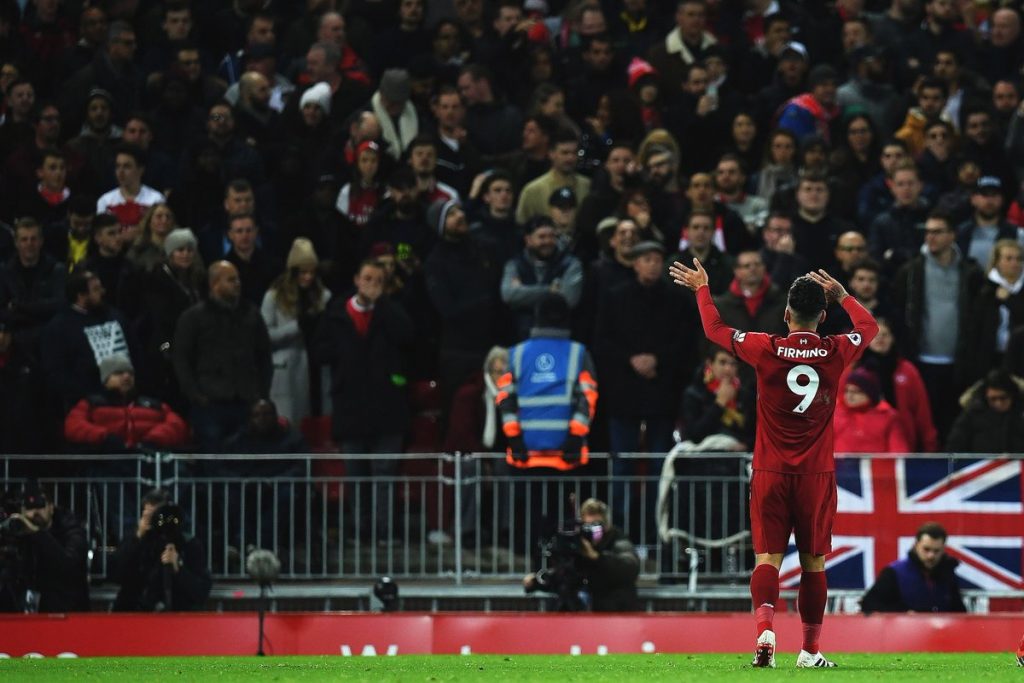 Alex Iwobi capitalised after the Reds gave the ball away as he sent in a cross that evaded Alisson for Maitland-Niles to prod home at the back post.

However, the Reds levelled just three minutes later with a scrappy goal - although they did not care one iota. Salah looked to shoot from the edge of the box only for Granit Xhaka to get a block in and Stephan Lichtsteiner to hit the loose ball straight at Shkrodan Mustafi.

The ball fell to Firmino, who had a simple tap in after the Bernd Leno was taken out of the game with the bouncing ball.

Firmino then turned the game on its head with a sublime finish less than two minutes later. The first may have been a messy goal, but this one was all about his skill and close control.

Sadio Mane caught Arsenal in possession as the Reds pounced, with Firmino picking up the ball and dribbling past two Arsenal shirts before coolly slotting home past Leno.

The Reds made it three just after the half hour mark and it was Mane who turned provider to goalscorer as Salah latched on to a long pass over the top and cushioned the ball straight towards the Senegalese international.

Mane made no mistake with his finish from close range as the Reds looked in total control of the game, whilst the Gunners were all over the place defensively.

Liverpool then made it four just before the interval as Sokratis Papastathopoulos brought down Salah in the box. Arsenal may have felt unlucky to have the decision go against them, but it was clumsy from the Greek defender.

Salah stepped up and smashed the penalty straight down the middle and despite Leno getting a hand to it, the ball blasted in to the back of the net to put the game beyond the visitors at the break.

The Reds continued their dominance during the second half and didn't need to get out of third gear for much of the proceedings. 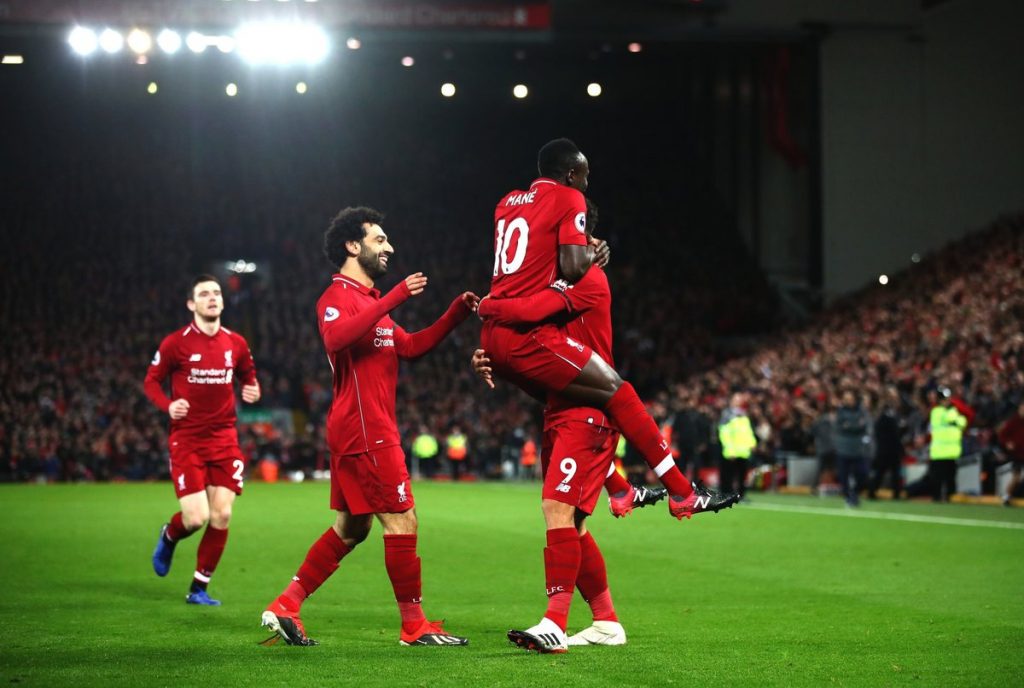 They were awarded a second penalty just after the hour mark as Saed Kolasinac barged in to Dejan Lovren inside the area.

Salah may have taken the first one, but Firmino stepped up at the Kop end to send Leno the wrong way and complete his hat-trick and Liverpool's fifth of the afternoon.

Jordan Henderson, Adam Lallana and Nathaniel Clyne all came on from the bench in the last half hour as the Reds cruised to victory.

Liverpool are now on 54 points after 20 games, their best ever points tally in the Premier League.

They remain the only unbeaten side in the Premier League, with a visit to Manchester City on 3rd January another huge opportunity for the Reds to take another step in the title race.