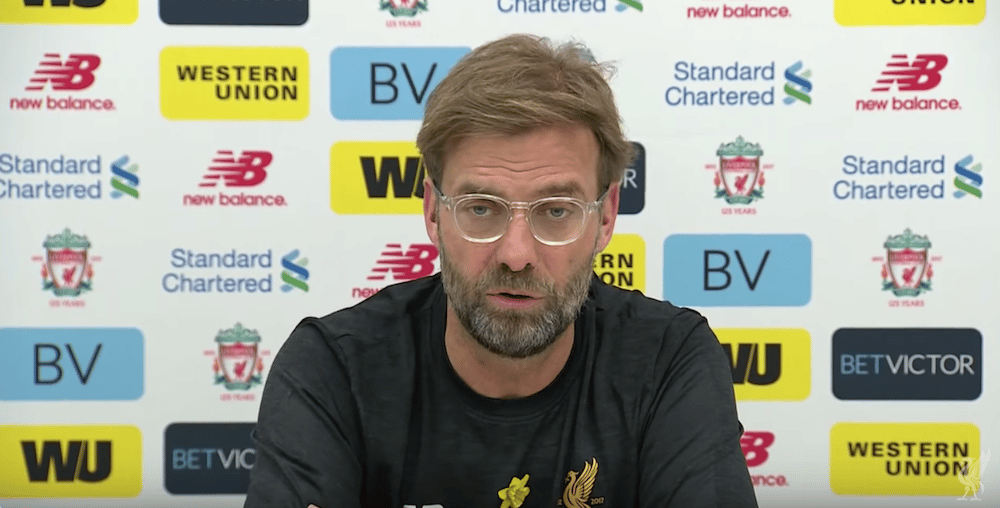 Liverpool manager Jurgen Klopp addressed the media on Friday, ahead of the Reds' meeting with Bournemouth at Anfield on Saturday.

The Reds return to Premier League action on Saturday having secured their place in the semi-finals of the Champions League with a 5-1 aggregate win over Manchester City in midweek.

However, Klopp says his Liverpool squad is fully focused on taking one step closer to qualification for next season's Champions League by beating the Cherries and then using a rare week-long gap between games to recover.

He said: "The quality of Bournemouth is all [I think about]. We don’t have a game on Tuesday again so why should I think [about anything else] on Saturday, exactly one week until West Brom.

"Who is available is available and will play. It’s a longer part of the week we had now from Tuesday to Saturday, that's good, it's not Wednesday then Saturday at 12.30pm - that's a big difference.

"We have to make a completely normal line-up and if somebody expects that from now on we make these kind of selections because I have always Roma in the background - or even Kiev - then that would make my life really difficult because the only way to go and win football games is to be completely focused on what you are doing.

"If we are all waiting [thinking], 'Hopefully nothing happens until then', then it will happen. We have to stay cool, we have to do our job.

"I would love to say we are through, we are in the top four, but I don't know what people would then expect - that we play the U18s? That makes no sense.

"We need rhythm, we need shape, we need momentum, we need all these things to be in the right moment in the best shape. You cannot win against these teams - not Bournemouth, not West Brom, not Roma - if you are not at your best, that's how it is.

"They fight for different things, I respect that, so that will have the biggest influence on my line-up."