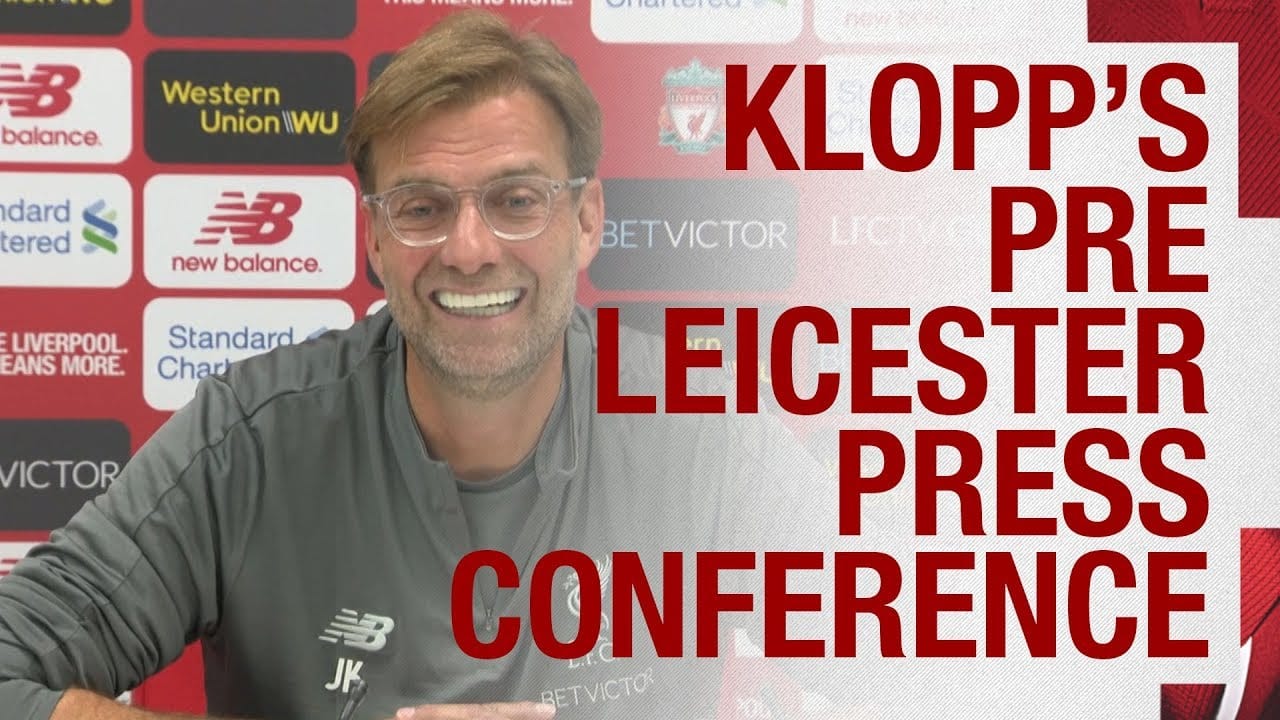 Jurgen Klopp spoke to the media before Liverpool's visit of the King Power Stadium to face Leicester City on Saturday.

The German manager is hoping his side can make it four consecutive wins to the start of their Premier League campaign.

However, an away trip to Leicester City could prove to be tricky for the Reds, who beat Brighton 1-0 at Anfield last weekend.

Leicester have also started the season well, winning against Wolves, Southampton and Fleetwood Town, whilst impressing in an eventual 3-2 defeat to Man United.

Klopp was clear to state why he would not underestimate this weekend's opponents, as he explained during his pre-match press conference.

“It’s a very good team. The work of Claude Puel is starting to pay off,” Klopp said.

“The preparation for the game was really interesting because Leicester are playing good football.

“They’re full of confidence, especially after the last result. It will be difficult for us, but we are in a good moment as well.

“We go there and really try everything to get the result we deserve in the end. Maybe we can deserve a win. We have to be at our best, that’s it.”

Leicester striker Jamie Vardy was sent off in the Foxes' victory to Wolves last week so is therefore suspended and Klopp acknowledged the difference it will make to Saturday's proceedings.

“Jamie caused pretty much each team problems with his style of play. He’s always on the edge, going in behind, over the shoulder, all that stuff - it’s really difficult to defend,” the boss said.

“That makes him different to nearly all other strikers in the Premier League, that makes him so special and that’s good for him but now that he will not play that changed of course a few moments in the game maybe for Leicester.

“But Iheanacho is a very good striker as well, slightly different of course but very, very good. And they changed anyway the style a bit, so it’s a very good team.

“OK, we play them so it’s not important that I like it too much, but the work of Claude Puel obviously now starts paying off. You can see it with Maddison, Pereira, Gray, that’s an offensive line that not a lot of teams in the Premier League have, plus then whoever is the striker in that formation.

“So that changes the style a bit and the preparation for the game was really interesting because it’s good football Leicester are playing. I think they are full of confidence, especially with the last result, which always helps and it will be difficult for us.

“But how I said, we are in a good moment as well and we go there and really try everything, everything to get the result we deserve at the end. So if we play good maybe we can deserve a win, and if we play not that good then it will be difficult. We have to be at our best, that’s it.”

Leicester City vs Liverpool kicks off at 12.30pm (BST) on Saturday. Visit LFC Globe ahead of the match for coverage.