Home » Liverpool FC News » "Blown away", "Running scared" - What the media made of Liverpool's win over Man United

"Blown away", "Running scared" - What the media made of Liverpool's win over Man United 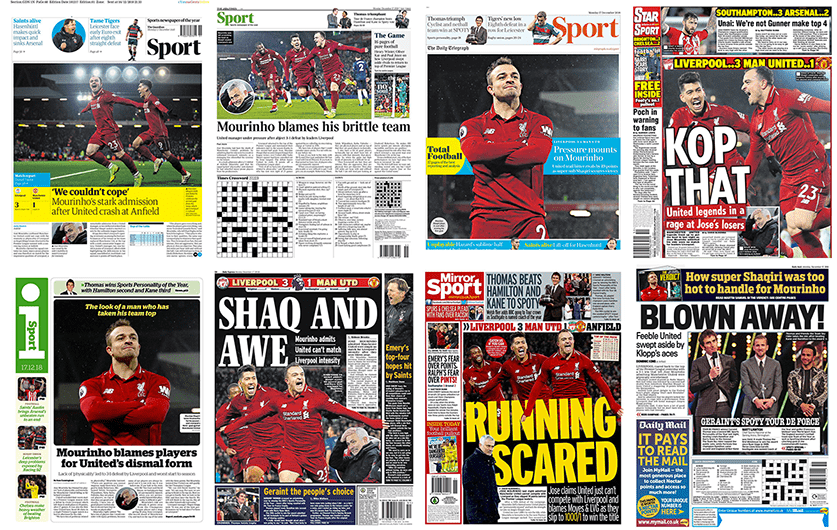 Here’s how the UK’s national papers saw Liverpool’s 3-1 win over Manchester United on Sunday as they went back to the top of the Premier League.

Jurgen Klopp made four changes to the side that beat Napoli 1-0 at Anfield just five days ago to clinch progression to the last 16 of the Champions League.

Nathaniel Clyne, Dejan Lovren, Fabinho and Naby Keita were all introduced to the side, whilst the injured Trent Alexander-Arnold, Joel Matip, James Milner and captain Jordan Henderson made way.

It was an intense opening between the two sides and it was Liverpool who made the break-through in the 24th minute via Sadio Mane's excellent finish from a superb clip in to the box from Fabinho.

United pegged them back with an unlikely equaliser that was against the run of play as Jesse Lingard pounced on a mistake from Alisson after Romelu Lukaku had drilled the ball in to the box.

Substitute Xherdan Shaqiri was introduced with 20 minutes to go in a second-half that was dominated by Liverpool and he took no time to make an impact.

He was alive to the danger after Sadio Mane's cross was parried by David de Gea, as he got to the ball and steadied himself before hitting a deflected shot in to the roof of the net.

The Swiss international added another just minutes later as he sent Anfield wild with another deflected shot, from outside the box this time, sailing past De Gea to make it 3-1.

Liverpool go back above Manchester City in the title race, continuing their club-record unbeaten run at the start of this season.

The Reds are now 19 points ahead of Jose Mourinho's side and it's no surprise that much of the media attention was focused on the United boss.

Here's what the media had to say about Liverpool's win over United... 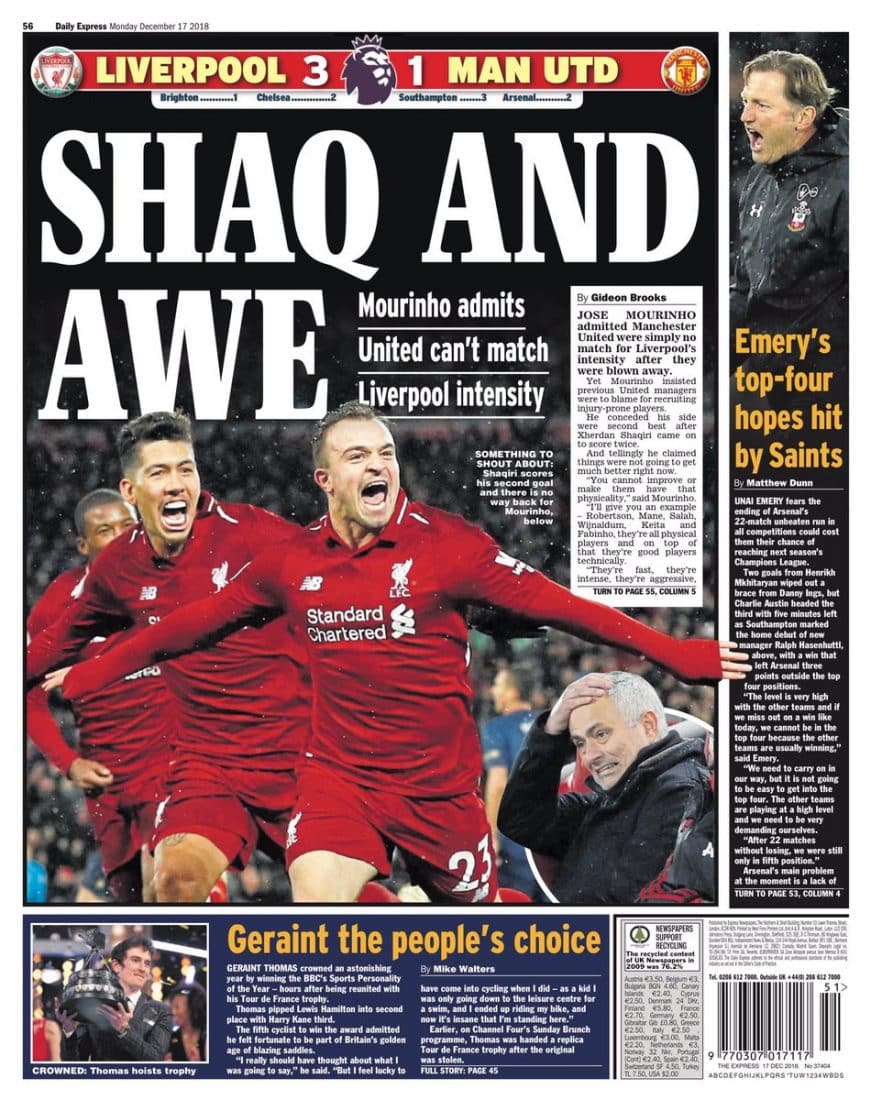 The Express lead with the headline "Shaq and Awe", a play on the phrase "shock and awe", which is a military tactic using overwhelming power and spectacular force to paralyse the opposition and destroy their will to fight.

That perfectly describes how Liverpool approached the game, with their 36 shots to United's 6 highlighting the gulf in class between the two sides. Never had the Reds been more superior to their rivals and it showed for all to see at Anfield. 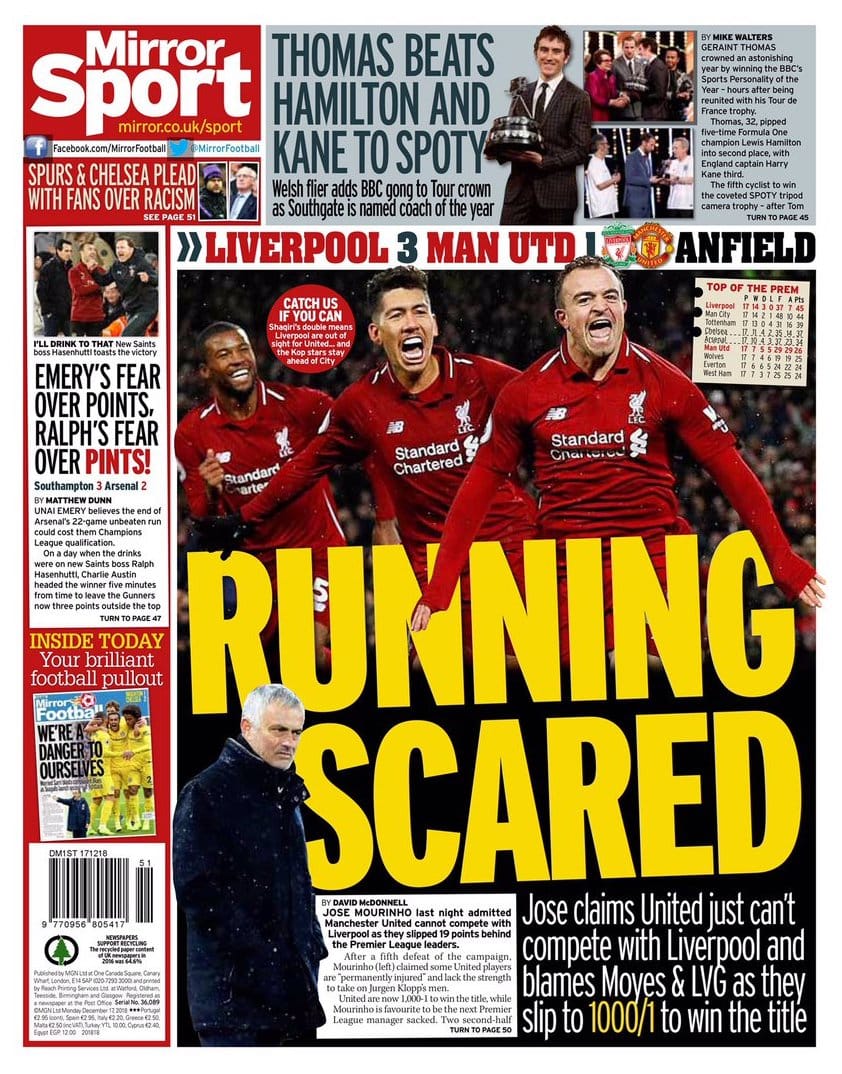 The Mirror claim Manchester United were "running scared" of Liverpool, highlighting Mourinho's admission that his side are unable to compete with the Reds and their intensity, calling some of his players "permanently injured" and lacking strength.

Mourinho said after the game: "Robertson, Mane, Salah, Wijnaldum, Keita, Fabinho, they are physical players and on top of that they are good technically.

"I have lots of good players technically, but we don’t have that intensity or physicality.” 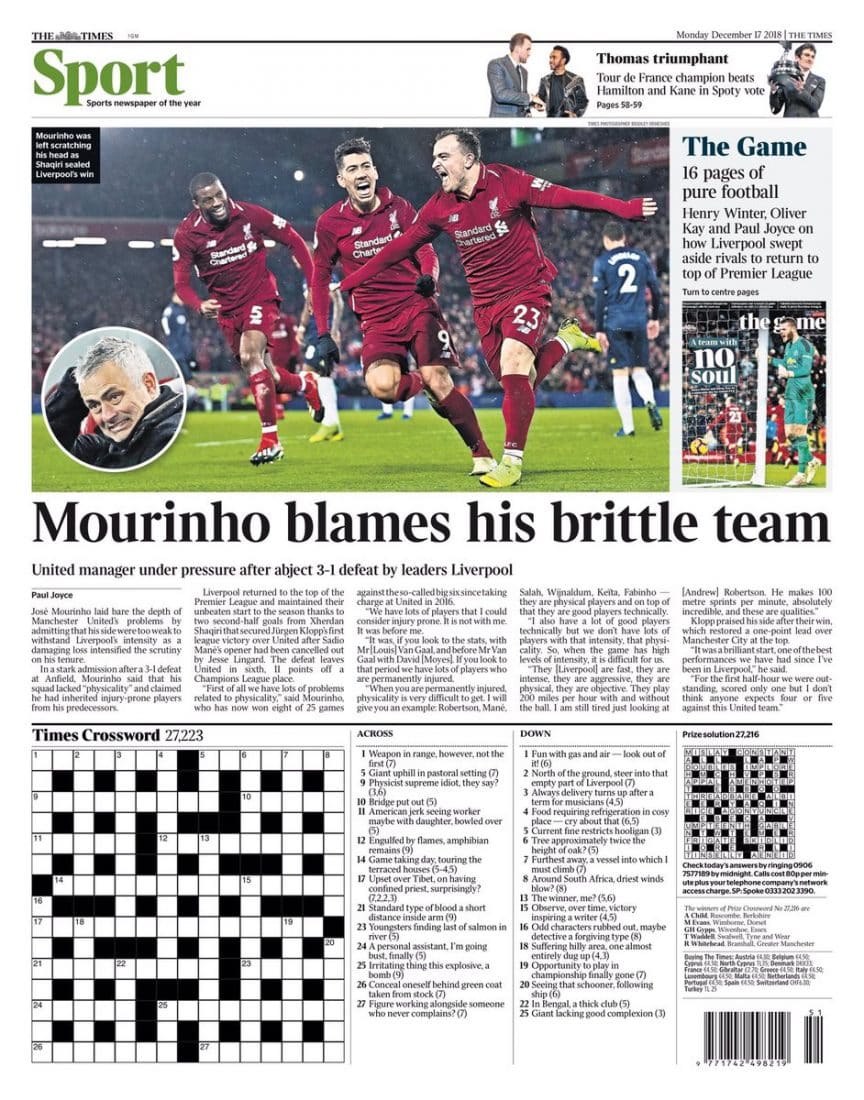 The Times also highlight Mourinho's critical assessment of his squad and his thoughts of their lack of physicality to keep up with the Reds, labelling them "brittle."

Paul Joyce writes that the "damaging loss intensified the scrutiny on his tenure", adding that the United boss is under pressure to keep his job should things continue as they are. 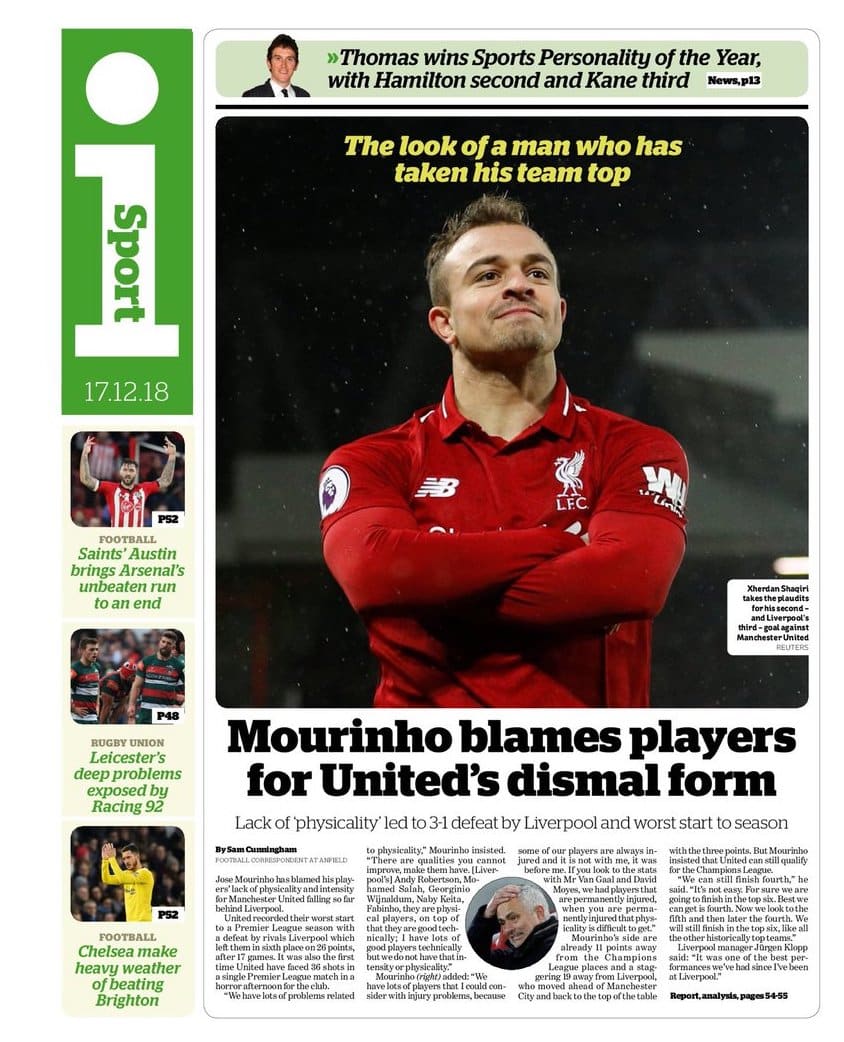 iSport, as expected, also turn their focus to Mourinho, who appears to have his days at United numbered, whilst a recurring theme of the Portuguese taking swipe at his players evident.

Sam Cunningham writes, "Sir Alex Ferguson was in the stands, probably horrified that he’d ever seen the day United were 19 points behind first-place Liverpool only 17 games into a campaign.

"The stuff of nightmares, in his day. Unthinkable from the moment he knocked Liverpool from their perch 30 years ago."

Cunningham goes on to say United are so far off the pace that they can "no longer see the perch anymore" - music to the ears of all Liverpool supporters! 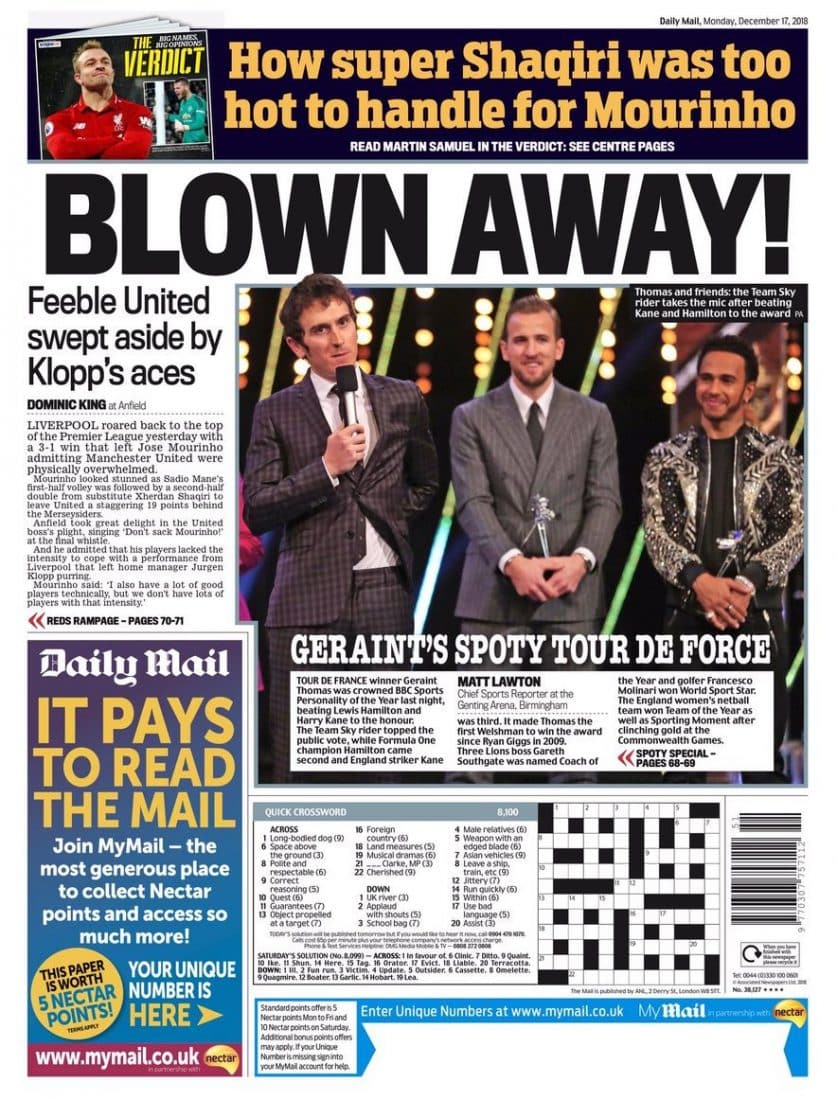 The Mail's Dominic King writes, "Feeble United swept aside by Klopp's aces" with the headline "Blown Away", and whilst the two sides were level for 70 minutes, in truth the final result was always heading the way it did.

Martin Samuel, also of the Mail, emphatically wrote: "Liverpool are the better team, that much is obvious. Yet there were many years — decades, really — when that was true of Manchester United, yet Liverpool had a habit of making these fixtures hugely unpredictable.

"This wasn’t. The locals thought United were there for the taking, and so it proved. Few could believe how completely Liverpool controlled the game from the start." 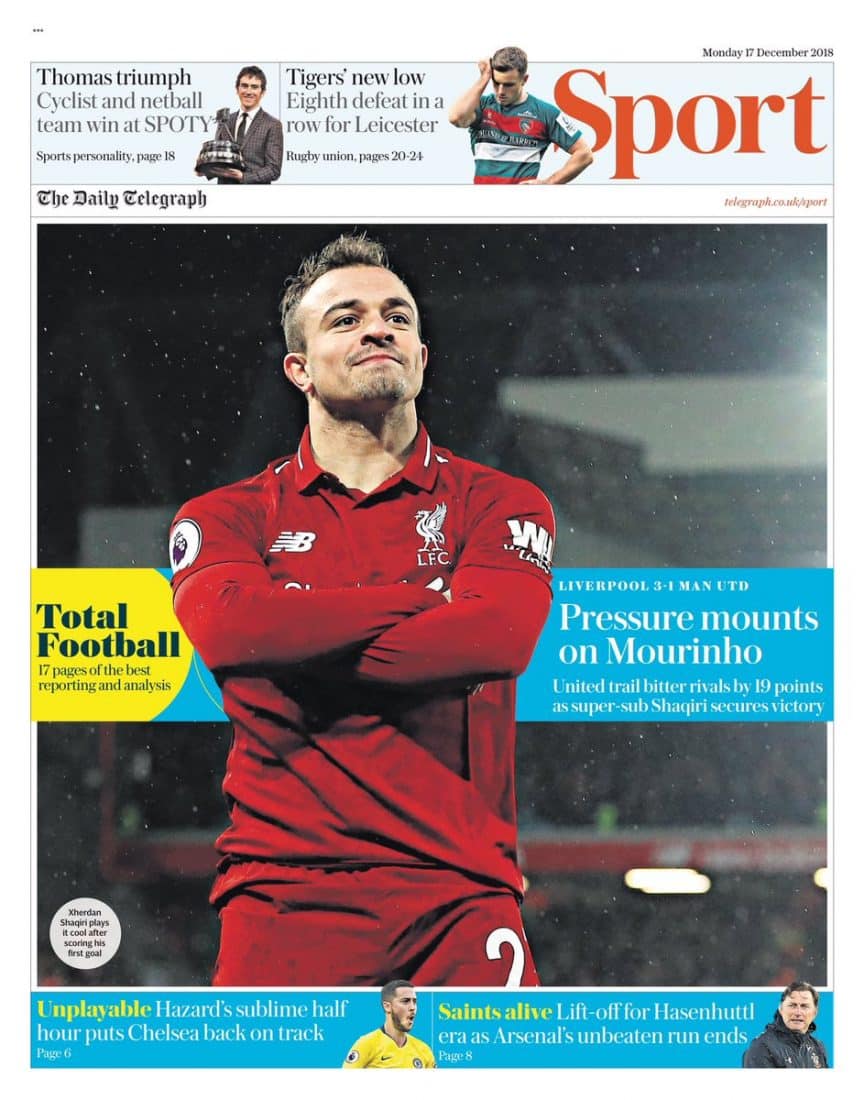 The Telegraph also state how the pressure is building on Mourinho - claiming whilst it is heading only one way for the United manager, Liverpool are going in the opposite direction - to the top.

Jason Burt writes, "The contrast is stark, indisputable and emphatic. United craved a performance even more than a ­result and got neither and, as every club who have ever employed Mourinho will testify, once the ­results go, there is not a lot left."

It's hard to disagree with Burt, who also goes on to praise Liverpool's Fabinho - who had a stellar performance in the middle of the park after coming in for Jordan Henderson in the starting eleven.

"Fabinho was simply outstanding. This was easily the Brazilian’s best game since joining Liverpool last summer, while Virgil van Dijk ­utterly dominated Romelu Lukaku, and Nathaniel Clyne came in after his long injury absence, to perform with assurance at right-back," he wrote. 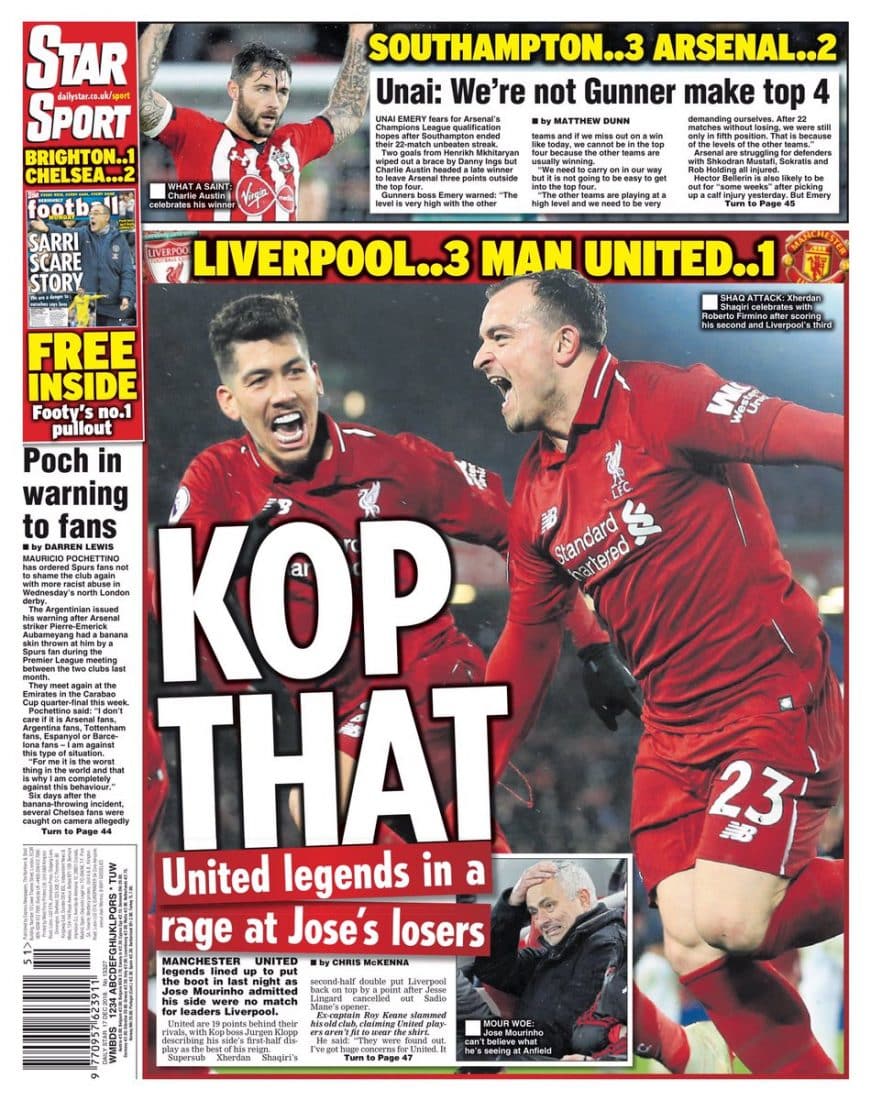 The Daily Star focus on the attention Mourinho has been getting from former United players, with ex-captain Roy Keane airing his views on Sky Sports after the game.

"United were never at the races, really," Keane said. "Liverpool dominated every aspect of the game: possession, the goals, the shots, the corners…

"That was my big worry before the game. I looked at United and thought, 'are they going to be really found out today?' And they were. Huge concerns for United going forward. 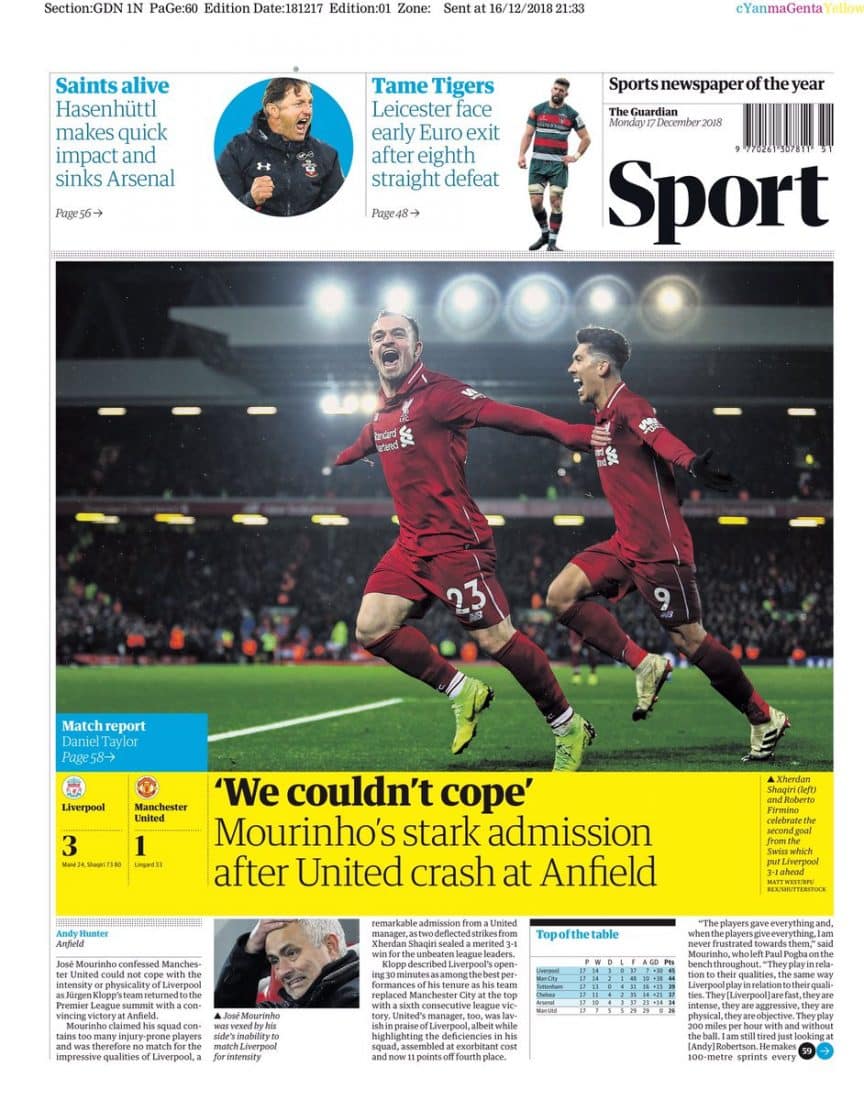 The Guardian's Andy Hunter believes Mourinho's admission of his side being not up to the mark is remarkable, considering how much has been spent in the last few years.

Barney Ronay also adds, "Liverpool march on and will now face a vital couple of weeks in their pursuit of the league title.

"United will continue to drift strangely, a vast, malfunctioning machine, clogged at every level and producing here a performance of such painful, fearful negativity it almost felt like a piece of doomed and terrifying art."